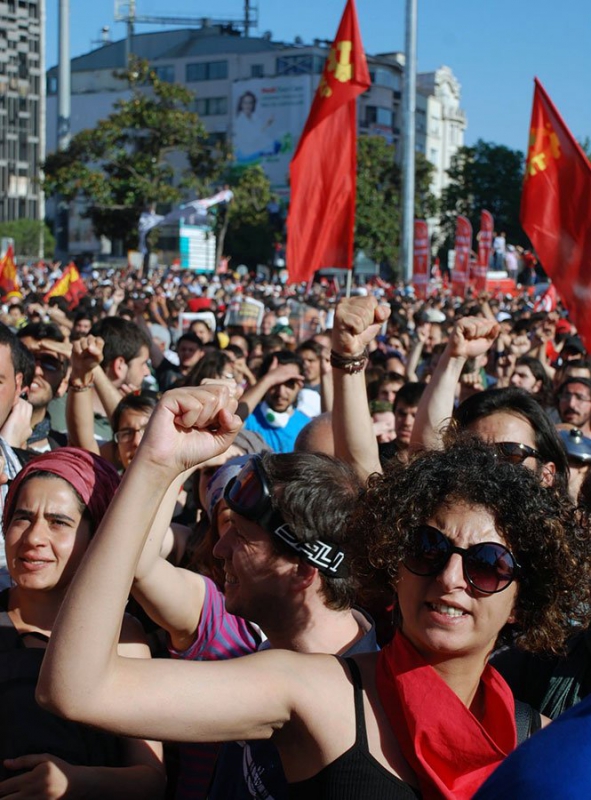 The wave of massive protests that started in Turkey on Friday has not stopped. In addition, organized labor is joining the struggle. On Tuesday (June 4), 240,000 Turkish government workers in the Confederation of Public Sector Trade Unions (KESK) walked off the job. The Confederation of Progressive Trade Unions (DİSK) is scheduled to join the general strike today (June 5th).

“The anti-union actions of the Turkish government are now spreading into a general confrontation with people who simply want the government to listen and cease repressing legitimate dissent. Prime Minister Erdogan should release the many trade unionists, journalists and others the government is holding in detention for no good reason, and open up to dialogue.”

The catalyst that ignited the current mass uprising in Turkey was brutal police repression in the last week of May against demonstrators who were speaking out against plans to turn a loved and historic city park into a shopping mall. Police of Prime Minister Recep Tayyip Erdogan brutally attacked the peaceful protesters. Protests have also erupted this month in opposition to Erdogan's military backing of the genocidal Islamists of the Free Syria Army fighting in Syria as well as his crackdowns on political freedom and moves by Erdogan's semi-Islamist government to limit alcohol sales and to outlaw signs of affection in public.

In the face of this mass uprising, Turkey's Deputy Prime Minister, Bulent Arnic, has apologized for "excessive violence" against protesters at Gezi Park last week saying:

"At the beginning of the protests, the excessive violence used against people concerned about the environment was wrong. It was unfair and I apologize to those citizens. The government has learnt its lesson from what happened. We do not have the right and cannot afford to ignore people. Democracies cannot exist without opposition."

He, however, then went on to say that he had no apology for the police violence used against protesters since that has left hundreds of people injured (many critically), deaths of an unknown number, and has involved massive arrests. The capitalist media have begun to admit that police actions against the protests have caused recent deaths, but there is good reason to think that their estimates are low. In addition. the Human Rights Organization of Turkey has complained that 1,000 prisoners have been mistreated and tortured.

Despite Arnic's empty gesture of apology, police continue to arrest activists to try to silence the people. Yesterday the government arrested 24 people in Izmar on charges of allegedly releasing false information on Twitter. Izmar Police say they are looking for 12 more people to arrest on the same charges.

Repression is nothing new by Turkey's U.S. backed capitalist regime. Last year the government even carried out a sweep of arrests of human rights lawyers. The Turkish government has also long kept the Kurdish language illegal and banned it in the schools. The Turkish government has only recently somewhat lifted some of those restrictions, but in extremely limited and unsatisfactory ways. Kurdish political organization has also long been banned and, with U.S. military assistance, Kurdish communities have been the target of brutal warfare that has killed 30,000 people.

The Revolutionary Tendency condemns the repression of the Erdogan government and advocates the overthrow of Turkey's brutal capitalist and pro-imperialist government in a proletarian revolution that smashes the capitalist state, abolishes capitalist exploitation, and works to establish a federation of socialist republics of the Middle East that include Kurdish, Turkish, and Arab speaking republics that guarantee the language and other rights currently denied the oppressed Kurdish people. Essential in that struggle to smash the capitalist state will be splitting the rank and file of the military from the military brass and the police. Photos of the military handing out gas masks to be used in the struggle against the police is a hopeful sign.

For Labor Rights and the Right to Descent in Turkey!

For the Language and Political Rights of the Kurdish People!

For the building of a Revolutionary Proletarian Party to Smash the Turkish Capitalist State Including its Police Force! Towards a Workers Democracy, Expropriation of the Capitalists Without Compensation, and a Planned Socialist Planned Economy!

This is an article of Liberation News, Subscribe Free:
http://lists.riseup.net/www/info/liberation_news