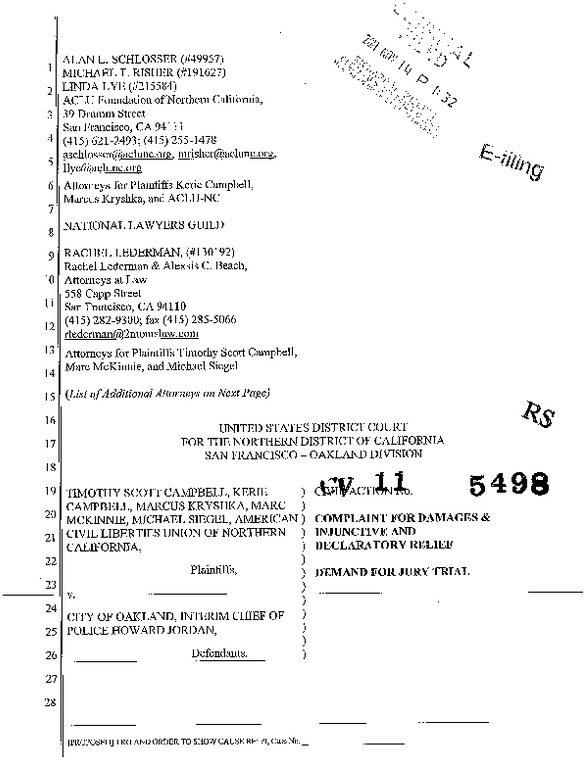 Today the American Civil Liberties Union of Northern California (ACLU-NC) and the National Lawyers’ Guild (NLG) filed a lawsuit in federal court against the Oakland Police Department (OPD) for its egregious constitutional violations against Occupy Oakland demonstrators. The lawsuit asks for an emergency temporary restraining order to stop police violence against political protesters. The restraining order is urgent because another police encounter with demonstrators is imminent, after the removal of the Occupy Oakland camp early this morning. The case is currently before United States District Court Judge Richard Seeborg, who immediately issued an order requiring the City to respond by 5pm tomorrow. If OPD uses excessive force against protesters again, it will need to justify its actions to the court.

The ACLU-NC and the NLG are suing OPD on behalf of Timothy Scott Campbell, a videographer who was shot with a bean bag projectile while filming police presence during Occupy Oakland on the night of November 2-3, 2011, and other demonstrators subjected to excessive force during recent demonstrations. Video of Campbell being shot can be viewed online. Additional plaintiffs include Kerie Campbell, Marc McKinnie, Michael Siegel, and NLG Legal Observer Marcus Kryshka.

“I was filming police activity at Occupy Oakland because police should be accountable,” said Campbell. “Now I’m worried about my safety from police violence and about retaliation because I’ve been outspoken.”

“OPD’s unconstitutional actions against protestors on those two nights were wholesale and flagrant violations of Oakland’s own Crowd Control Policy,” said Rachel Lederman, an NLG attorney.

On two recent occasions, October 25, 2011 and November 2, 2011, OPD and cooperating police agencies under their direction attacked the plaintiffs and other Occupy Oakland supporters who were peacefully participating in political demonstration. Police indiscriminately shot flash bang grenades, other projectiles and excessive amounts of tear gas into crowds of peaceful protesters. Police also fired other projectiles at individuals who posed no risk of harm, but were clearly engaged in First Amendment protected activity, such as filming police at a demonstration. This conduct violates the Fourth Amendment by subjecting protesters who posed no safety concerns to unnecessary and excessive force and violates the First Amendment by interfering with their rights to assemble and demonstrate.

The lawsuit asks for a temporary restraining order and preliminary injunction because OPD has shown by its recent actions that it will continue to violate protesters’ constitutional rights unless a court intervenes.

OPD’s recent conduct violates its own Crowd Control Policy, adopted in the settlement of a lawsuit arising from OPD’s prior mishandling of a large protest in 2003. The policy strictly limits the use force and prohibits the indiscriminate use of shot-filled “bean” bags and other projectiles against crowds or peaceful protesters.

The lawsuit, Timothy Scott Campbell, et al, vs. City of Oakland and Interim Police Chief Howard Jordan was filed in the United States District Court for the Northern District of California. Attorneys for the plaintiffs are: Alan L. Schlosser, Michael T. Risher and Linda Lye for the ACLU Foundation of Northern California; Rachel Lederman, Carol Sobel, Bobbie Stein and R. Michael Flynn for the National Lawyers’ Guild; and James B. Chanin and Julie M. Houk from the Law Offices of James B. Chanin.

###
http://www.indybay.org/newsitems/2011/11/0...
Add Your Comments
LATEST COMMENTS ABOUT THIS ARTICLE
Listed below are the latest comments about this post.
These comments are submitted anonymously by website visitors.