§green psychiatry
by The Good Doctor
Saturday Dec 12th, 2009 9:45 PM
not sure if i'm going to be able to listen to this...any chance on you revealing what exactly "green psychiatry" is? the best one i can think of is the homeless garden project, which rotkin voted to move a long time ago, way out to the boonies and it's never been the same since...
Add a Comment
§I believe it means
by Bernard G
Saturday Dec 12th, 2009 11:08 PM
that the ECT is solar powered.
Add a Comment
§How'd it go?
by Sum Dim III
Sunday Dec 13th, 2009 9:24 PM
I missed it. How'd it go?
Add a Comment
§Rotkin Interview Archived
by Robert Norse
Sunday Dec 13th, 2009 9:59 PM
Long time listeners and tenacious trolls should be aware by this time that all my shows are archived. Likewise with the Rotkin interview at http://www.radiolibre.org/brb/brb091213.mp3 (download and go to the middle of the file).
Add a Comment
§A Long Time Listener
by Sum Dim III
Monday Dec 14th, 2009 10:02 PM
I was hoping to hear more about the interview here. I'm surprised there hasn't been more discussion. What happened? Was it just sort of a blasé interview?
Add a Comment
§Past Rotkin/Norse encounters
by Becky Johnson
Thursday Dec 17th, 2009 7:05 PM 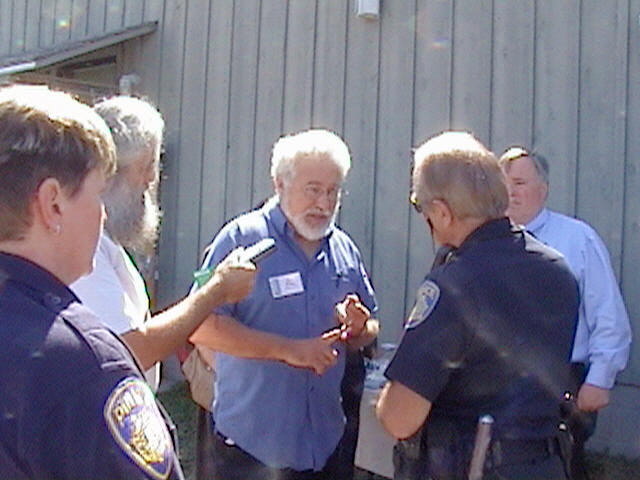 this was when Mike Rotkin tried to have Robert Norse arrested for bringing a sign into an ACLU event open to the public at Longs Marine Lab, August 2007.
Add a Comment
§I don't get it
by Sum Dim III
Thursday Dec 17th, 2009 7:23 PM
I'm sorry Becks. What does this have to do with the Sunday show?I just want to know how that went. Robert was very excited about it. Why are you posting unrelated matter in response to my question?
Add a Comment
§spoiler alert
by can-do candace
(theotherway42 [at] gmail.com) Friday Dec 18th, 2009 4:00 PM
Here's what will happen (if this happens at all):

Rotkin will come off as more educated and understanding. Norse will do his best to troll Rotkin and his credentials, despite Norse never having held public office or improving the Santa Cruz community. Norse will strike the audience as more ideologically positive and hopeful, whereas Rotkin will come across as more practical and civic-minded. 101.1 will attempt to cast Rotkin in a bad light, but Rotkin's message will come through to the unbiased listeners.

Norse will continue trolling the Santa Cruz community with his fake organizations comprised of alcoholic homeless drug abusers, and Rotkin will continue to keep being elected for being a figure that the public sees as worthwhile to invest their time and money in.

Unless Norse can convince the public that the outdoor sleeping ban and the temporary moratorium on mmj dispensaries are related through some diabolical plot by the city council, he has no hope of coming across as educated, level-headed or a constructive criticizer. He'll continue being the whiny 8 year old who didnt get the new Tonka truck this year for Christmas.
Add a Comment
§Huh? What happened?
by Sum Dim III
Friday Dec 18th, 2009 8:43 PM
Of course Candace is correct. But wait; did the interview not happen? I'm confused. This was potentially a breakthrough interview for Robert. Can someone please clarify?

Robert? Becks?
Add a Comment
§Another Rotkin Interview
by Robert Norse
Tuesday Jan 19th, 2010 8:04 AM
A newer Rotkin interview/debate can be found at http://www.radiolibre.org/brb/brb100117.mp3 (download and go to the middle of the file).
Add a Comment
Support Independent Media
We are 100% volunteer and depend on your participation to sustain our efforts!