The AETA is being used for the first time since its passage by Congress in 2006 to do exactly what civil rights advocates feared it would do - criminalize activities protected by the First Amendment of the U.S. Constitution. The oral arguments presented on July 13th were not about the allegations as directly applied to the AETA 4, but rather that the whole case should be dismissed now because AETA itself is unconstitutional. 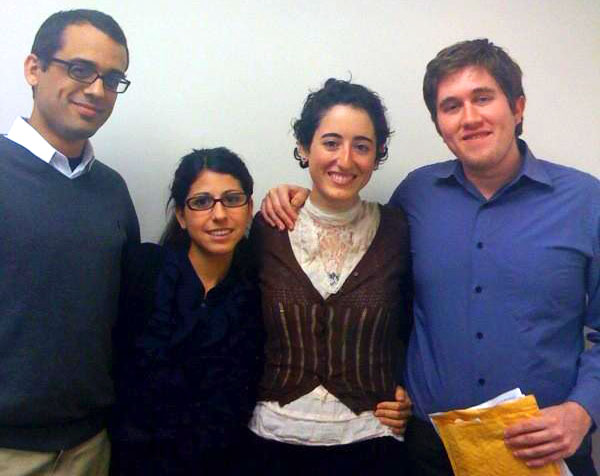 Photo of the AETA 4 courtesy of the AETA 4 Support Committee. From left to right: Nathan Pope, Adriana Stumpo, Maryam Khajavi and Joseph Buddenberg.

U.S.A. v. Buddenberg is a federal prosecution of four animal rights activists in California for conspiracy to commit animal enterprise terrorism. On February 19th and 20th, the Joint Terrorism Task Force of the FBI arrested four animal rights activists as "terrorists." The indictment against the AETA 4 charges them with conduct including protesting in front of the homes of University of California medical researchers in Santa Cruz and Berkeley, chalking the sidewalk, chanting and leafleting, as well as "using the Internet to find information on bio-medical researchers." The Center for Constitutional Rights affirms that these acts are all protected by the First Amendment of the U.S. Constitution.

The indictment against the AETA 4 was made possible because of a little known law called the Animal Enterprise Terrorism Act (AETA) which is an expansion of a previous law called the "Animal Enterprise Protection Act." Independent journalist Will Potter reports that AETA was steamrolled through Congress with little discussion or debate in November of 2006 by corporations and the politicians that represent them. AETA is aimed at suppressing speech and advocacy by criminalizing First Amendment-protected activities such as protests, boycotts, picketing and whistleblowing. It targets animal rights activists, but includes language so broad and vague it could be used to prosecute a wide range of social movements. Through the AETA, Congress has codified the dangerous misuse of the term "terrorist" to describe animal rights activists, and this has been largely propagated by mainstream media.

"The AETA is so overbroad and vague that picketers protesting labor practices at WalMart who mount a successful boycott could be charged with animal enterprise terrorism because WalMart sells lunch meat," said CCR Cooperating Attorney Matthew Strugar. "And it is impossible to know from the language of the law whether your activities might be covered. The AETA is unconstitutional, and if it remains on the books it will be a genuine threat to free speech."

The Center for Constitutional Rights (CCR), a non-profit legal and educational organization committed to the creative use of law as a positive force for social change, says AETA is unconstitutional because it criminalizes a broad swath of protected First Amendment activities and is so unclear as to fail to give people notice of whether or not their conduct is lawful. On this basis, CCR and the defense team have asked the Court to strike down the AETA as unconstitutional.


The following are my very rough and incomplete notes of the oral arguments.

The courtroom was packed, and many people were there in support of the AETA 4.

Matthew Strugar of the Center for Constitutional Rights (CCR) argues that AETA is unconstitutional for a number of reasons, not just one.

For example, section (d) (3) (B) [The text of AETA is available as a pdf from GreenIsTheNewRed.com] defines the term 'economic damage' and says it "does not include any lawful economic disruption (including a lawful boycott) that results from lawful public, governmental, or business reaction to the disclosure of information about an animal enterprise;"

CCR argues that this boycott exemption, which was directly influenced by third parties, is vague and unconstitutional.

A comparison is made between the civil rights movement and the animal rights movement. For example, the case NAACP v. CLAIBORNE HARDWARE. [In 1966, a boycott of white merchants in Claiborne County, Miss., was launched at a meeting of a local branch of the National Association for the Advancement of Colored People (NAACP).]

Under AETA, if a boycott is effective, or not effective, you are penalized.

Kali Grech, attorney for Maryam Khajavi, argues that AETA is aimed at silencing animal rights activists, as evidenced in comments made by Wisconsin Representative James Sensenbrenner.

AETA is aimed at silencing critical speech, which is constitutionally protected. This is a content based restriction. For example, section (a) (1) says, "for the purpose of damaging or interfering with the operations of an animal enterprise"

Animal rights protests are excluded under this statute. This is illegal under the constitution.

This is a viewpoint based restriction.

Government is clearly restricting one side of the debate.


THE GOVERNMENT'S POSITION ON AETA, as stated by U.S. Attorney Elise Becker

Subsection (2) (A) - not just speech, but conduct. Not just a lawful protest, those are clearly exempt.

AETA criminalizes what people do, not what they say or believe.

AETA is applied when a person is placed under reasonable fear, there is a pattern of conduct, threats, vandalism, etc...


MORE ARGUMENTS FROM THE DEFENSE TO DISMISS THE CASE; AETA IS UNCONSTITUTIONAL:

Section (a) (2) (B) uses frivolous and overly broad language: "intentionally places a person in reasonable fear of the death of, or serious bodily injury to that person, a member of the immediate family (as defined in section 115) of that person, or a spouse or intimate partner of that person by a course of conduct involving threats, acts of vandalism, property damage, criminal trespass, harassment, or intimidation"

Terms used are not defined. For example, 'harassment' and 'intimidation' are already covered under the word 'threat'.


THE COURT DID NOT MAKE ANY DECISION AT THIS TIME.

THE NEXT COURT HEARING WAS SCHEDULED FOR MONDAY, SEPTEMBER 14.
Add Your Comments
LATEST COMMENTS ABOUT THIS ARTICLE
Listed below are the latest comments about this post.
These comments are submitted anonymously by website visitors.