by ~Bradley (bradley [at] riseup.net)
Thousands of students from around the Monterey and San Francisco Bay Areas participated in a "Four Twenty" celebration in Porter Meadow at UC Santa Cruz on April 20th, 2008. Four Twenty (420) is a time of day when people, often a group of friends, smoke cannabis together or eat foods cooked with it. For that reason, April 20th has evolved into a counterculture holiday where people gather to celebrate and consume cannabis. Porter Meadow at UCSC has traditionally been the largest 420 gathering place around, and this year was said to be even larger than 2007. Despite the severe measures initiated by the UCSC administration to curtail the unorganized convergence, folks showed they were determined to experience Four Twenty as one large group of people in the Porter Meadow. 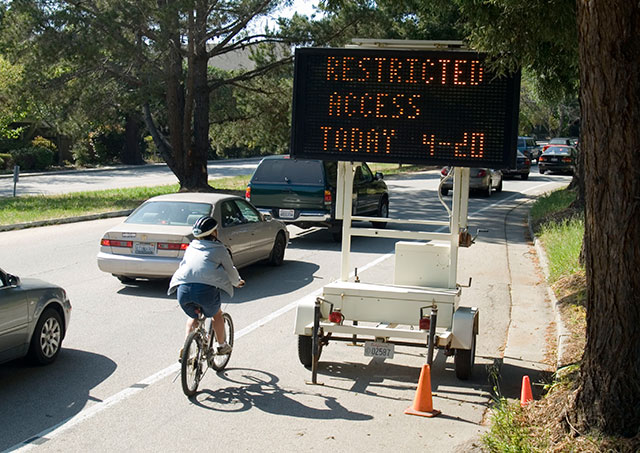 §Checkpoint at the Main Entrance
by ~Bradley 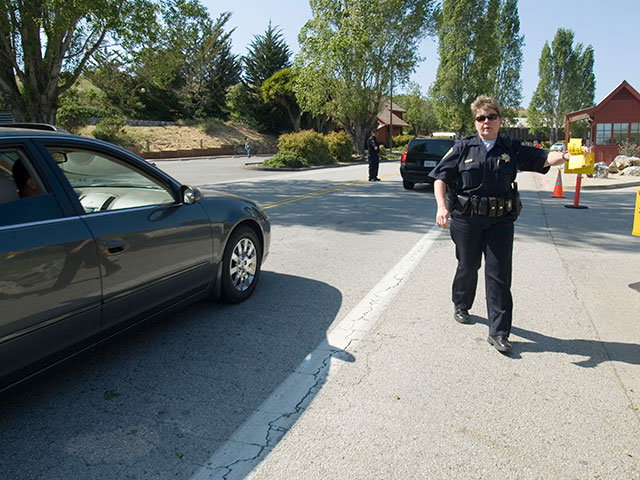 Currently enrolled students can only purchase parking permits at the main Sales Office not the Kiosk." 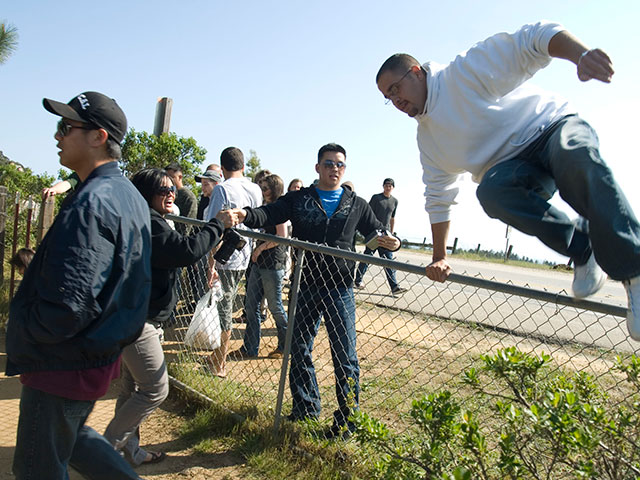 §Path to Oakes College
by ~Bradley 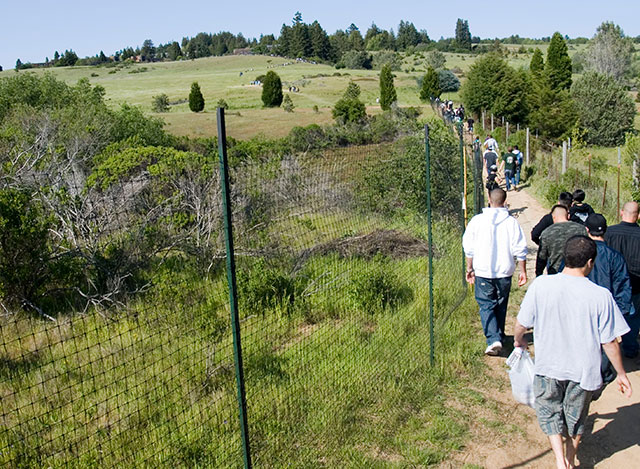 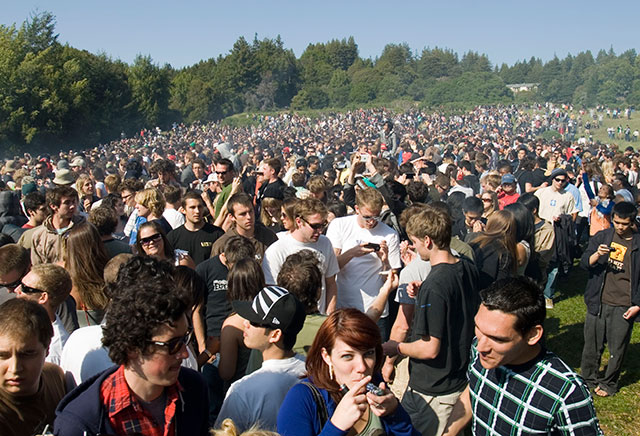 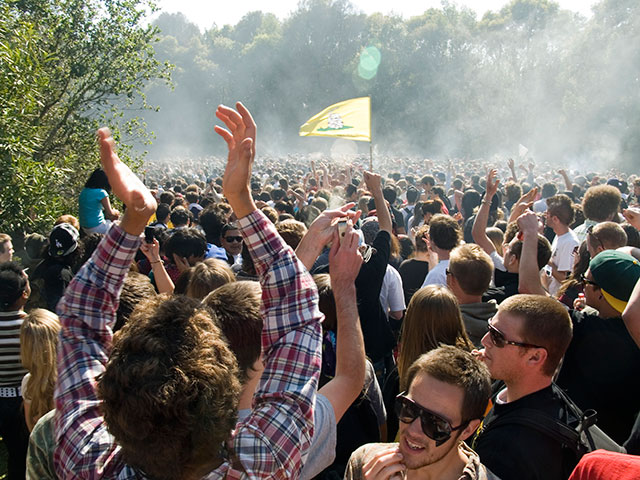 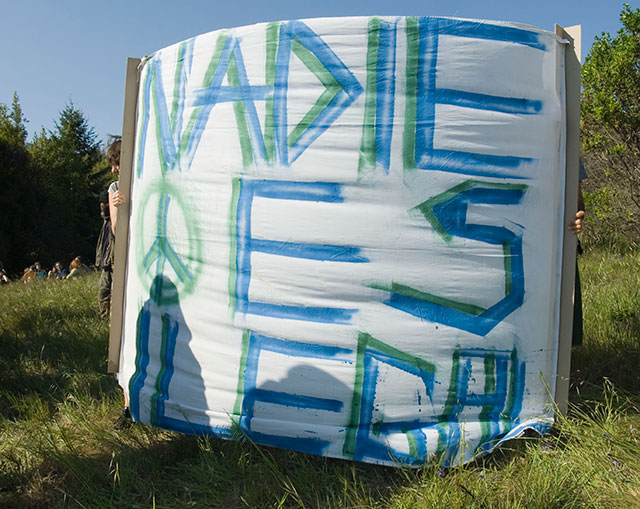 Nobody is illegal
§Looking Down Porter Meadow
by ~Bradley 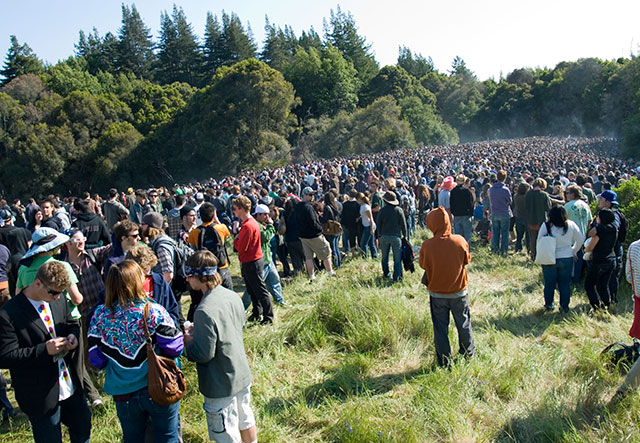 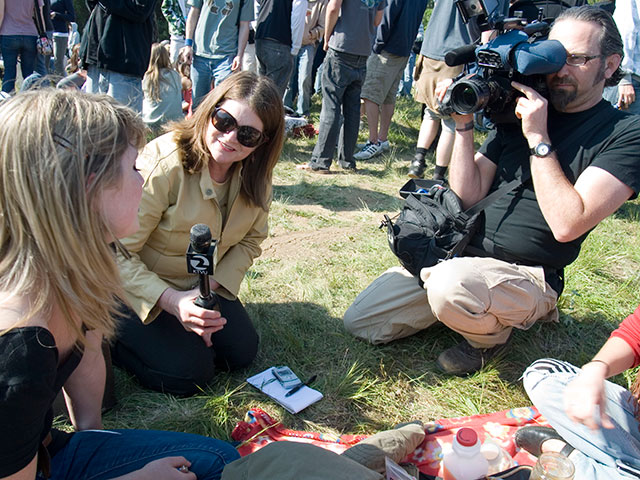 talking to the corporate media is usually a bad idea..
§Faded
by ~Bradley Welcome to the Monkey House
§San Jose and Salinas, represent!
by ~Bradley 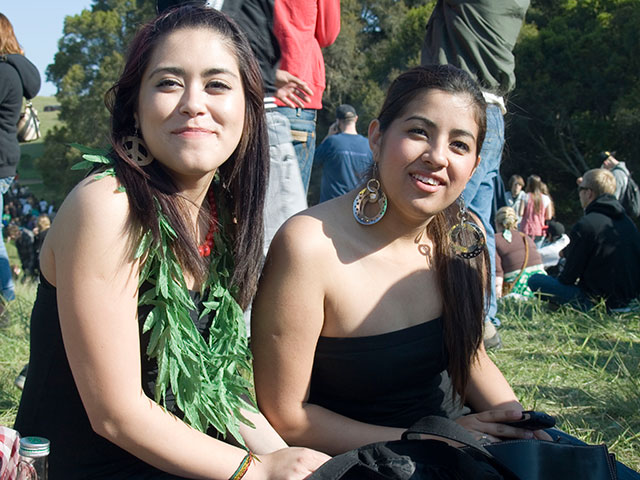 Cannabis is an annual, dioecious, flowering herb. The leaves are palmately compound, with serrate leaflets. The first pair of leaves usually have a single leaflet, the number gradually increasing up to a maximum of about thirteen leaflets per leaf (usually seven or nine), depending on variety and growing conditions. At the top of a flowering plant, this number again diminishes to a single leaflet per leaf. The lower leaf pairs usually occur in an opposite leaf arrangement and the upper leaf pairs in an alternate arrangement on the main stem of a mature plant.
http://en.wikipedia.org/wiki/Cannabis
§Gas Mask
by ~Bradley 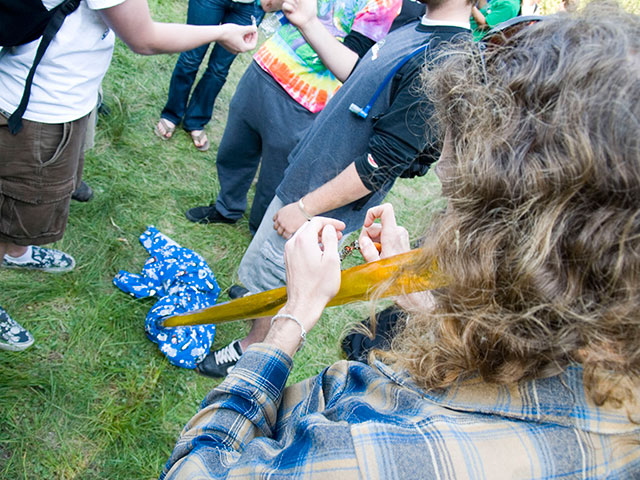 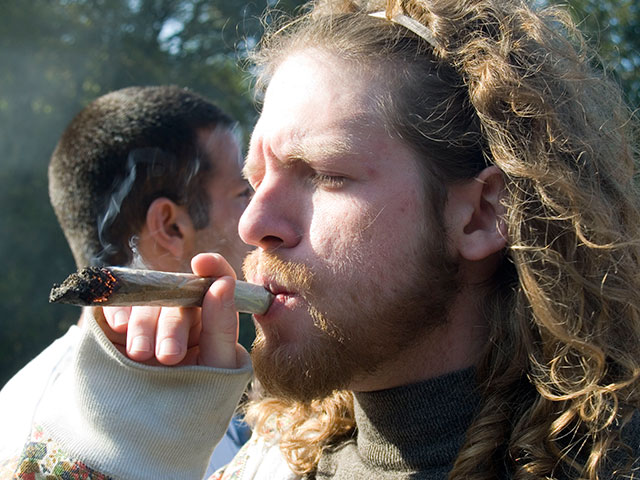 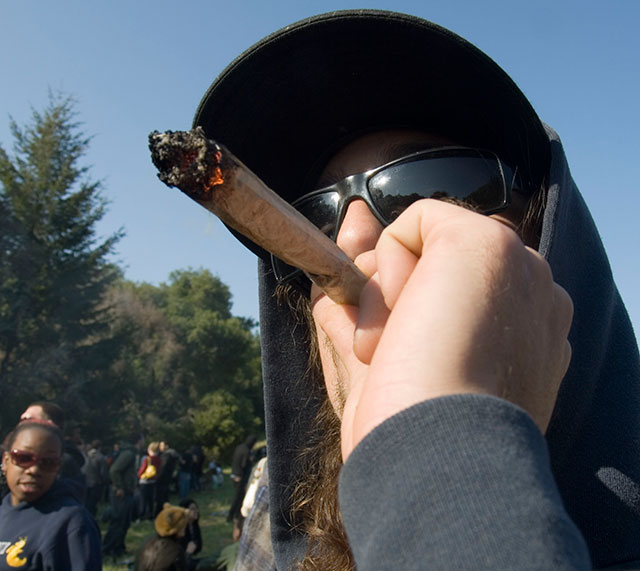 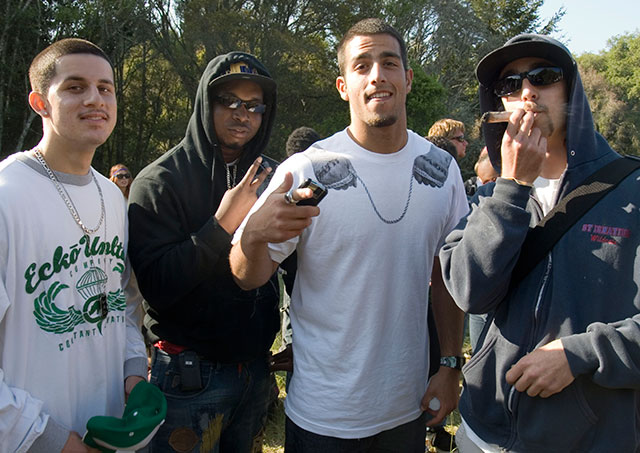 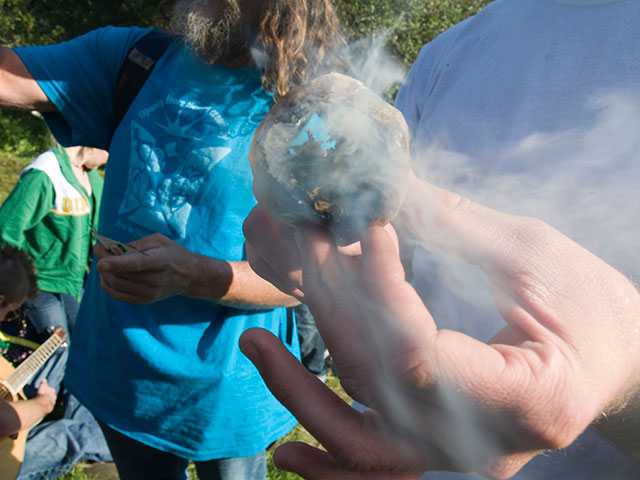 §Path to Porter
by ~Bradley 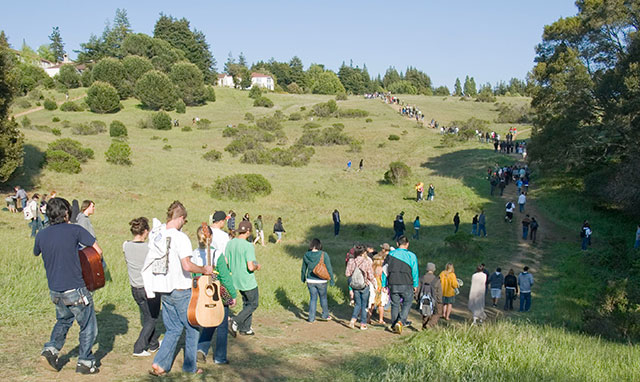 §Kush Not Bush
by ~Bradley §Disarm UCSC No War
by ~Bradley The berimbau is a single-string percussion instrument, a musical bow, from Brazil. The berimbau's origins are not entirely clear, but there is not much doubt on its African origin, as no Indigenous Brazilian or European people use musical bows, and very similar instruments are played in the southern parts of Africa. The berimbau was eventually incorporated into the practice of the Afro-Brazilian martial art capoeira, where it commands how the capoeiristas move in the roda.
http://en.wikipedia.org/wiki/Berimbau
§Flute
by ~Bradley §Students Pickup Trash Left By Others
by ~Bradley The didgeridoo (or didjeridu) is a wind instrument of the Indigenous Australians of northern Australia. It is sometimes described as a natural wooden trumpet or "drone pipe". Musicologists classify it as an aerophone.
http://en.wikipedia.org/wiki/Didgeridoo
Add Your Comments
Comments (Hide Comments)
§Great pix
by Corpy
Great picks, Bradley! Thanks for letting us that couldn't be there relive the experience. :) Oink oink!
Add a Comment
§Very Nice!
by Chinese I's
Niceness! What a wonderful show of unity and collective justice, not to mention auto-free campus attendance. Out of the car we can all go far, out of the box we outfox. In a roadblock we rock the trails, it never fails. Car culture vulture can't touch our root route. Try to shut it down and what? Bigness, big-ups and bigger than ever. Forward all-ways. Peace.
Add a Comment
§Nice Pics
by Kath
Love the peace symbol earrings in the one photo. Wish I could have been there. Peace!
Add a Comment
§Great 420 photos!
by Becky Johnson (becky_johnson222 [at] hotmail.com)
Much better than the Sentinel coverage! I didn't see any 5 foot bongs there!
Also, the music, and the litter pick-up documented. I heard that the next day, after 5,000 people
had gathered in the meadow, that there was no trash found.

To: Members of the UCSC Community
Fr: Ginny Steel, University Librarian
Re: Grateful Dead Archives Given to UCSC

It is a thrill to write to tell you that the surviving members of the iconic rock 'n' roll band, the Grateful Dead, have selected the UCSC Library as the permanent home for their substantial archive of materials documenting the band's history. The collection will be the largest donation ever made to the library's Special Collections Department, and it includes more than 2,000 square feet of memorabilia, artifacts, and other documents. This incomparable archive will undoubtedly become a major resource for research related to the Grateful Dead, the phenomenon of the Deadheads, American music, and popular culture during the last three decades of the 20th century.

The formal announcement of this gift will be made this morning at a press conference to be held at the Fillmore in San Francisco, a singularly appropriate venue where the band performed many times. Chancellor Blumenthal will be present to accept the archive on behalf of the campus, and he will be joined by Grateful Dead band members Bob Weir and Mickey Hart.

UCSC has a long tradition of academic interest in the Grateful Dead. Fred Lieberman, professor of music, teaches a course on the band, and he has also collaborated with Mickey Hart on two books, Planet Drum and Drumming at the Edge of Magic. It was through Professor Lieberman that we first became aware of the search for a home for the archive.

The Library will be raising funds to support the processing and preservation of the archive, and, as work on it begins, we will provide regular updates on our web site.
The press conference, which will begin at 11 a.m., will be streamed live on the web. You can access it via a link on the UCSC home page; a press release, providing more information about this substantial gift, will also be posted there at that time.
Add a Comment
§Wait... HOW MANY?
by m.p.g.
Wait... HOW MANY thousand people drove how many miles, consuming how many gallons of gasoline which belched untold quantities of shit into the atmosphere, so that a bunch of selfish people could stand around in a "natural" setting and get stoned while telling themselves how incredibly cool and in-touch-with-the-earth they all were?

You're celebrating this? Have you considered protesting it, instead?

Does it seem odd that the campus administration gets labeled as bunch of fascists because they want to limit the number of cars?
How many police officers were there wandering through this giant meadow you were all in? Were there a lot of arrests?

In the interest of environmental sanity, organizers (and everyone) should consider voluntarily canceling the "big event" next year. Instead we could encourage people to view 4/20 as a day to share with friends locally, enjoying each other and appreciating the natural environment. Don't get in a car. Get high together and go for a walk. Or stay home and make love. Or go outside and make love, who cares? Just don't drive there, ok?
Add a Comment
§wats good
by the boss (kurlie16 [at] yahoo.com)
dats wat im talking bout keep da tradition going im coming soon as i graduate
Add a Comment
§The one with the kilo joint and the pig
by Romulan Timewarp