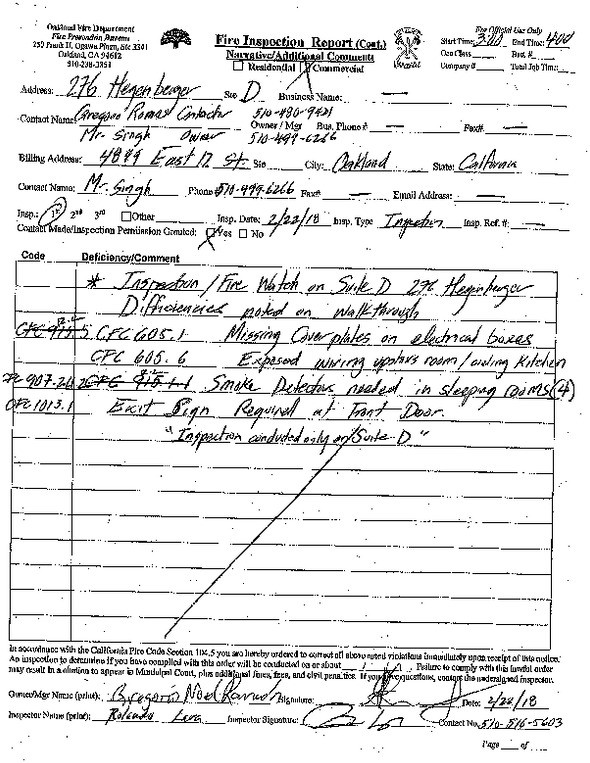 Additionally, Fire Inspection Reports starting in February of 2018 reveal that the De La Fuente Scholarship Foundation was operating out of a location at 276 Hegenberger Rd., that was unsafe and unfit for human habitation.

Reportedly, “Baljit Singh Mann and Surinder Mann, a married couple and members of an influential Oakland family that owns 130 commercial and residential properties, as well as a taxi company, had a “business practice renting dangerously converted spaces unfit for residential use to vulnerable tenants,” wrote Judge Brad Seligman in his Sept. 1 decision.”

Additionally, according to the City Attorney’s office, “Since at least 2016, the defendants have rented uninhabitable or dilapidated units in buildings across the city to tenants who are often low-income immigrants and speak little to no English . Defendants have profited from this predatory business model by renting unsafe units to tenants who are desperate to find affordable housing, and often are unable to take legal action to defend their rights.

Code Enforcement issued a Notice to Abate the violations in February 2018 (at 276 Hegenberger Rd.), which stated that the uninhabitable conditions at the property presented a serious threat to the lives, health, safety and welfare of the tenants and the public. The owners failed to fix many of the above problems, and eventually Code Enforcement red tagged the property in June 2018.”

Reportedly, during 2017, while renting space from Baljit Singh Mann at 276 Hegenberger Rd., apparently, Ignacio De La Fuente was well aware of the code compliance violations at the property that made it unsafe and unfit for human habitation.

Reportedly, as a lobbyist during March of 2018, Ignacio De La Fuente was at a meeting representing Baljit Singh Mann, and Hermit Mann, while he was in a meeting with city officials at the Planning and Building Department offices in downtown Oakland, even though De La Fuente is not listed as a lobbyist, as is required by Oakland city law.

This was during the same period that Fire Inspection Reports and code compliance violations reveal that 276 Hegenberger Rd., was receiving numerous code violations for being unsafe and unfit for human habitation.

Some people are asking; "Why would the local community members who were the "key people" for the De La Fuente Scholarship Foundation be operating out of a location owned by some notorious slumlords at 276 Hegenberger Rd., in 2017, that was unsafe and unfit for human habitation?"

Key People at the De La Fuente Scholarship Foundation In 2017:

Key People: Some key people range from being members with The Unity Council, the Tenderloin Neighborhood Development Corporation, UC Davis, and AC Transit.

Some of the "key people" that were with the De La Fuente Scholarship Foundation are Members of the Unity Council & Host Committee: See link below...

Additionally, the 990 tax filing records did not report how much the De La Fuente Scholarship Foundation paid for utilities, or maintenance, phone service, internet services, salaries, printing, publications, postage, shipping, or any other activities that may have occurred at 276 Hegenberger Rd. These are typical activities that are generally reported in detail by most nonprofit organizations in their 990 tax filings, but failed to be reported by Ignacio De La Fuente or the De La Fuente Scholarship Foundation in their 2017 990 tax filing.

Ignacio De La Fuente, a three time loser, is a former Oakland City Council member who lost his bid in 2012 to replace Rebecca Kaplan for the at-large seat on the Oakland City Council, and unsuccessfully ran three times for Mayor of Oakland during 1998, 2006, and 2018, is reportedly running for mayor again in 2022.