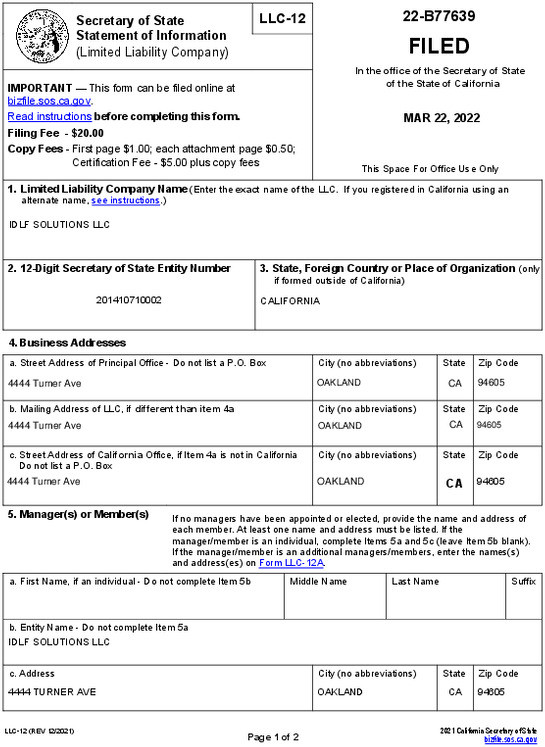 Oakland - Ignacio De La Fuente, a former Oakland City Council member who lost his bid in 2012 to replace Rebecca Kaplan for the at-large seat on the Oakland City Council, and unsuccessfully ran three times for Mayor of Oakland during 1998, 2006, and 2018, is reportedly running for mayor again in 2022.

Since losing his council seat to Noel Gallo in 2012, records show that during 2014, De La Fuente became a consultant and incorporated IDLF Solutions LLC., in 2014

According to Zoom, Zoom reports that De La Fuente’s company called IDLF Solutions LLC is successful enough to have a revenue of $5 million dollars.

However, in contrast to what Zoom reports, De La Fuente apparently believed that he struggled so much as a consultant during the pandemic with IDLF Solutions LLC, that he applied for two federal PPP loans as a result.

Indeed, struggling as a desperate needy Oakland consultant, this resulted in IDLF Solutions LLC and De La Fuente seeking $20,833 in assistance in PPP loans during Feb. 2021.

In contrast to the PPP loan report, records with the Federal Election Commission (FEC) reveal that De La Fuente was doing so well during 2015 through 2022 as a consultant with IDLF Solutions LLC, that De La Fuente gave away thousands of dollars in political campaign contributions. The thousands of dollars in campaign contributions made by De La Fuente occurred despite the fact that he applied twice for federal PPP loans during the pandemic in 2021, that were unpaid by IDLF Solutions LLC and De La Fuente, and were eventually forgiven as a result.

This is the same Ignacio De La Fuente who reportedly was the prime target of an FBI bribes-for-contracts probe at Oakland City Hall in 2006 and 2007.

Reportedly, according to the East Bay Times in 2006, “A federal grand jury Thursday indicted a man with close ties to several city officials on charges of extortion and public corruption for demanding cash in return for a city contract, authorities said. Maurice Himy, 59, of San Rafael, is accused of telling an Oakland businessman, who wanted a contract to auction the city’s surplus vehicles and other property, that he could get him the deal in return for cash because of his connection to city officials. Himy’s arrest has sparked a wide-ranging FBI investigation into whether “Oakland City Official A” — identified as City Council President Ignacio De La Fuente — or other city officials granted contracts in return for favors, federal officials said.”

Reportedly, according to SF Gate, “With his son facing a 14-year prison stretch for multiple sexual assaults, Oakland City Council President Ignacio De La Fuente has gone on the attack against the Police Department - accusing investigators of blowing the case out of proportion because they wanted to destroy his political career as he embarked on a campaign for mayor.”

No doubt, some believe that Oakland would be just fine in the hands of Ignacio De La Fuente if people were ever dumb enough to elect him as mayor, but others are not so sure.