Add an Event
Newswire
Calendar
Features
Home
Donate
From the Open-Publishing Calendar
From the Open-Publishing Newswire
Indybay Feature
Related Categories: Santa Cruz Indymedia | Anti-War | Health, Housing & Public Services
Resisting Two Wars: The Threatened Nuclear Holocaust & The Attack on the Unhoused
by Robert Norse (rnorse3 [at] hotmail.com)
Monday May 9th, 2022 12:51 PM
A brief protest at the Town Clock Sunday (5-8) against U.S, escalation of the war in Ukraine drew a handful of dedicated activists from older times and other places. 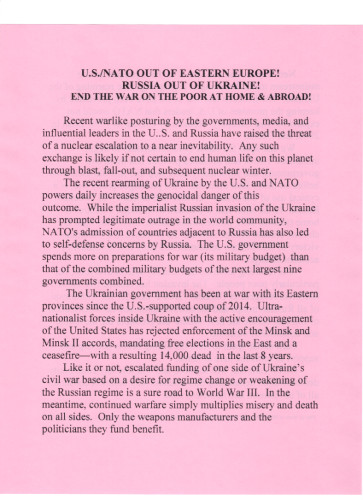 original image (850x1170)
As Food Not Bombs swept and cleaned the area after its daily 3 hour meal, a handful of activists gathered to hold up signs and pass out flyers denouncing U.S. escalation of the proxy war in Ukraine.

The flyer also demanded that Russian troops leave Ukraine, that Ukraine be neutralized, and the Minsk and Minsk II accords be restored with the removal of all foreign troops and advisers from Ukraine.

HUFF (Homeless United for Friendship & Freedom) voted to endorse a shorter version of the flyer being distributed as a letter to the local media. In the past, HUFF has tabled and agitated to prompt local opposition to foreign wars as well as the local war against the poor.

Meanwhile City Council continues its war against the poor outside (and renters inside) with a proposed clearing of the Benchlands encampment and a Camping Ban (CSSO/OVO) crackdown.

See the latest anti-homeless report at its 5-10 meeting https://ecm.cityofsantacruz.com/OnBaseAgendaOnline/Documents/ViewDocument/Summary%20Sheet%20for%20-%20Homelessness%20Response%20Programming%20Quarterly%20Update%20and%20Homel.pdf?meetingId=1907&documentType=Agenda&itemId=23425&publishId=31751&isSection=false p. 12.

For those not completely burnt out, now's the time to reach out to oppose both wars before we're all blown away as seems increasingly likely. 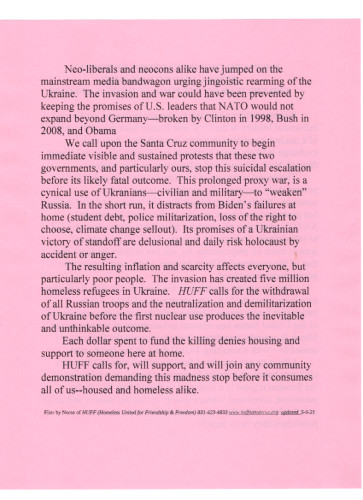 original image (850x1170)
Download and Distribute
http://www.huffsantacruz.org
Add Your Comments
Support Independent Media
We are 100% volunteer and depend on your participation to sustain our efforts!