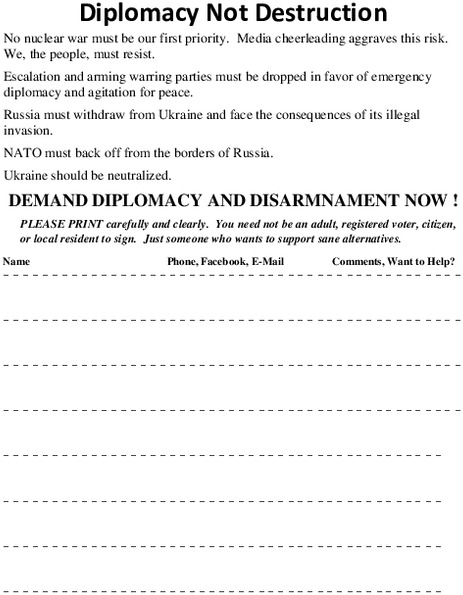 Download PDF (280.2KB)
With windy sunshine replacing the predicted rain at noon yesterday, several of us distributed literature and signed up a few folks opposing two wars at Cooper and Pacific.

The City Council's CSSO law promised shelter and storage moving against homeless folks. In concert with City Attorney Condotti, this was their hypocritical bow to the Martin v. Boise decision. That decision was cited in Sausalito, Novato, Petaluma, Chico, and other cities--stopping eager police from seizing tents and bedding, under injuinction, with the COVID shelter-in-place concern being a major factor.

Many activists (including the ACLU) seem to be waiting to take any legal or organizing action until police issued an actual citation. Then the Community Standards and Service [CSSO] and the Oversized Vehicle Ordinances [OVO] could be directly challenged. The CSSO or OVO laws passed last year but supposedly were on hold until token shelter and storage could be constructed. Now it appears, City authorities aren't waiting to enforce these toxic expansions of the old Camping Ordinance (MC 6.36).

A mass deportation from San Lorenzo Park was stopped by aggressive Community resistance and a Santa Cruz Homeless Union lawsuit winter before last.

However, the mass deportations resumed several months ago. There with many painful examples: The forced relocation of survival campers from the scores with tents at Hiway 1 and 9 in front of Housing Mutters (inaccurately termed "Housing Matters"). The bulldozing of the Hell's Trail area next to hiway 1 bridge. The removal of many next to the graveyard along the old Camp Paradise location perpendicular to hiway 1 at the bridge. Most recently, the clearing of the community along the downtown levee.

And vehicles have been ticketed and seized, destroying the shelter of families under spurious authority of the72-hour "abandoned vehicle" law with homeless activists facing particular pressure.

DECEPTIVE STRATEGY
Particularly duplicitous is City Manager's unilateral Declaration of the Benchlands by the City Manager's proxies as a "sanctioned" campground. The idea seems to be to use it as a dumping ground for anyone police chose to uproot.until the entire encampment is dispersed this summer. That goal was made clear under the enforcement provisions of City Council's report accepting millions of state money to "help" the homeless.

This strategy misleads both supporters and critics of the homeless community. Supporters are lured into passivity and don't challenge police bullying 'move-em-along" tactics, instead waiting for a constitutional challenge when the first CSSO/OVO ticket is issued. Opponents are led to believe enforcement will be reasonable and humane when no decent shelter or storage exists for the majority of those outside. Meanwhle the Benchlands is due to be depopulated, driving folks onto the streets and downtown in the summer--regardless.

All this harassment was despite the 2018 Martin v. Boise decision which held that survival campsites were not to be cleared until there was sufficient housing for the homeless community in the city involved.

Foot traffic was extremely light, though most passersby were congenial and none were hostile. We picked up a few signatures from foreign visitors and students and renewed contacts with some older locals.

HUFF will be meeting Thursday March 17 at the Sub Rosa Courtyard (903 Pacific) next to the Bike Church to discuss next steps.

Increased war hysteria and hostility to unhoused survivors here--at least on the part of local authorities needs to be countered with a truthful alternate narrative. Watch for us downtown on Pacific Avenue.
http://www.huffsantacruz.org
§Say NO to the Sweeps !
by Robert Norse
Wednesday Mar 16th, 2022 9:07 PM 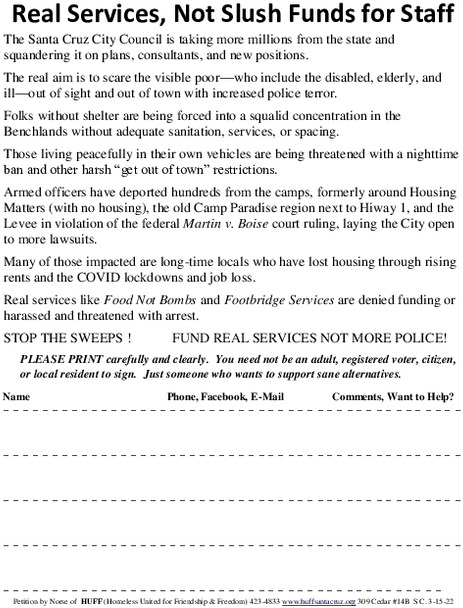 Download PDF (379.8KB)
Keep informed. Be ready to support those outside with your presence, video, and spreading truthful narratives.
http://www.huffsantacruz.org
§Talking Back to City Council
by Robert Norse
Wednesday Mar 16th, 2022 9:07 PM 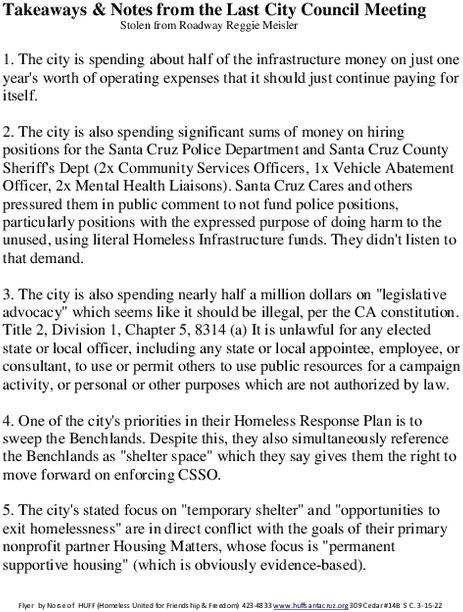 Download PDF (215.2KB)
The City's spiderweb of empty promises and paper plans contrasts sharply with (very) cold reality on the ground.
http://www.huffsantacruz.org
Add Your Comments
Support Independent Media
We are 100% volunteer and depend on your participation to sustain our efforts!