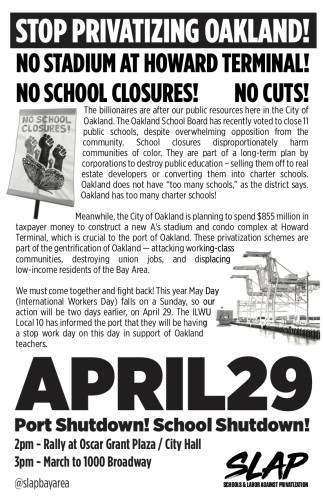 original image (824x1275)
For the second time in months , OEA teachers, students, staff and supporters of public education will rally at Oscar Grant Plaza at 2PM and march through Oakland to stop the privatization and closure of schools and the sale of the Port of Oakland Howard Terminal to billionaire GAP and A's owner John Fisher. This privatization is supported by Oakland Democrats on the City Council, State legislators like Bonta, Skinner and Governor Newsom.
§2/18 Rally Against Privatizing Schools & The Port of Oakland
by SLAP
Saturday Apr 16th, 2022 1:21 PM 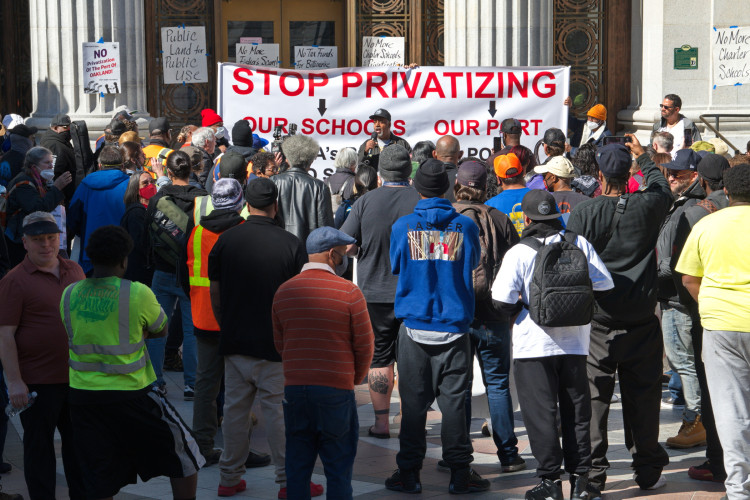 original image (2102x1400)
On February 18 a joint rally of OEA and ILWU members and activists against privatization of the schools and port of Oakland took place. Building United Fronts against privatization are critical step throughout the country and world to stop these attacks by the billionaires and their Democratic Party politicians in the US who carry out this anti-working class and racist agenda.

Oakland ILWU & OEA, Students & Community Rally To Stop Privatization & Union Busting From The Port To The Schools!
https://youtu.be/-s2iGYDfUAs
Hundreds of ILWU longshore workers, Oakland teachers and labor and community activists rallied on 2/17/22 at Oakland City Hall Oscar Grant Plaza to oppose the privatization on of the Port and sale to the GAP & A's billionaire owner John Fisher for a stadium and the closure of public schools in Oakland.
Speakers talked about how the sale would wreck the port and also the role of the Democratic Party in doing the bidding of the billionaires. The Oakland City council members are supporting the massive gentrification project and the destruction of the working port for luxury condos, hotels and a privately owned stadium. The president of the Alameda Building Trades Andreas Cluver who is also the president of the Port Commission has supported privatization of the port and is trying to pit ILWU longshore workers against Teamsters. He has also gotten the leadership of the Alameda to support this multi-billion property development that will harm the 80,000 maritime workers and the working class Black and Brown West Oakland community.
Teachers and students joined the rally and connected the attack on the port workers with the shutdown of public schools in West Oakland at the same time. John Fisher and his family also run the KIPP and Rocketship charter school chain and A's president Dave Kaval is on the board of directors of Rocketship.
Workers talked about their lives in Oakland and the importance of the public education system and union jobs on the waterfront that are both threatened by the Fisher and his supporters on the Oakland school board and Oakland City Council.
Speakers also talked about the need for a workers party as a political alternative to the capitalist policies of the Democrats in Oakland, California and nationally. California has a $45.7 billion surplus but does not have money to keep the schools open during a pandemic and also provide housing for the people of Oakland and the state.
The rally was initiated by
United Front Committee For A Labor Party
Additional media:
NO Public Money To A's Billionaire Owner John Fisher For Stadium In Port Of Oakland
https://youtu.be/7L3detM583c
No Public Money For GAP/A's Billionaire Owner John Fisher' Stadium! ILWU Members & Community Rally & Speak Out
https://youtu.be/dKnpBab1kd0
IT'S WAR! The Fight To Stop School Closures In Oakland As Hundreds Rally and March
https://youtu.be/dV0bjNSSUbE
Build The A’s Stadium In Pacific Heights! Labor Day Rally At Billionaire GAP A's John Fisher's Mansion
https://youtu.be/VRBqGMgKnHM
Fisher, STOP THE GREED! ILWU 10 & Community Activists Speak Out To Protest Port Theft Privatization
https://youtu.be/a_Mp_b1pF_A
No Excuses Schools: Bad Theory Created KIPP by Amateurs & Backed By SF Billionaire GAP A’s Fisher Family
https://tultican.com/2021/09/04/no-excuses-schools-bad-theory-created-by-amateurs/?fbclid=IwAR01W8anaIt5Go8vCfu-Fas7H6JOq7xmfeLLRoDAf1vEqDyFZaO7AjWeBDg
Oakland Port Privatization Scam By Billionaire John Fisher, Demos & Union Bureaucrats
https://youtu.be/1hu_s7A4Yc8
Who's Selling Whom? The A's Stadium, The Destruction of Howard Terminal In The Port Of Oakland & The Battle In Labor
https://www.youtube.com/watch?v=2sgYOaGbB7U&t=19s
"It's Insane!" ILWU Longshore Workers & Truckers Challenge Oakland A's Billionaire Owner John Fisher’s Land Grab Of Howard Terminal
https://youtu.be/5A8uZpqSX_M
Oakland City Council Left In Dark In Coliseum Buy-out By Fisher
Kaplan to A’s: Are you ‘double-timing’ us with Portland?
https://ebcitizen.com/2019/06/14/kaplan-to-as-are-you-double-timing-us-with-portland/
Maritime, Labor & The A's Stadium At The Port Of Oakland Press Conference 5/13/19
https://youtu.be/ouL39ISDzBE
Alameda Labor Council, AFL-CIO Backs Howard Terminal Ballpark for Oakland A's
https://www.mlb.com/press-release/alameda-labor-council-afl-cio-backs-howard-terminal-ballpark-for-oakland-a-s
Andreas Cluver
https://www.portofoakland.com/people/andreas-cluver-commissioner/
Maritime, Labor & The A's Stadium At The Port Of Oakland Press Conference
https://youtu.be/ouL39ISDzBE
United Front Committee For A Labor Party
http://www.ufclp.org
Labor Video Project
http://www.labormedia.net
Add Your Comments
LATEST COMMENTS ABOUT THIS ARTICLE
Listed below are the latest comments about this post.
These comments are submitted anonymously by website visitors.