Add an Event
Newswire
Calendar
Features
Home
Donate
From the Open-Publishing Calendar
From the Open-Publishing Newswire
Indybay Feature
Related Categories: Americas | U.S.
LinkedIn and the case before the International Criminal Court: VADM Ann Rondeau, et. al
by Martin Edwin Andersen
Wednesday Dec 29th, 2021 4:26 AM
This case before the International Criminal Court and the U.S. Merit System Protection Board concerns gross misconduct at the Pentagon's National Defense University, including the hiring and promotion of those guilty of crimes against humanity. What follows is the written testimony, ideas and recollections of a dozen ranking officials who served in U.S. Southern Command, the Naval Special Warfare Command, the FBI, the Defense Intelligence Agency and National Defense University, among other national security positions. 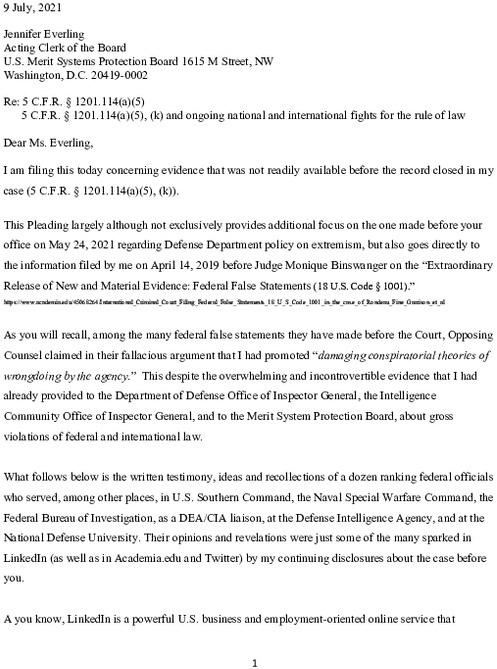 Download PDF (14.1MB)
This Pleading before the Merit System Protection Board and the International Criminal Court, largely although not exclusively, provides additional focus on the one made before the MSPB on May 24, 2021 regarding Defense Department policy on extremism, but also goes directly to the information filed on April 14, 2019 before Judge Monique Binswanger on the “Extraordinary Release of New and Material Evidence: Federal False Statements (18 U.S. Code § 1001).”


Among the many federal false statements they have made before the Court, Department of Defense Opposing Counsel claimed in their fallacious arguments that an already decorated national security and human rights whistleblower had promoted “damaging conspiratorial theories of wrongdoing by the agency.”


What follows below is the written testimony, ideas and recollections of a dozen ranking federal officials who served, among other places, in U.S. Southern Command, the Naval Special Warfare Command, the Federal Bureau of Investigation, as a DEA/CIA liaison, at the Defense Intelligence Agency, and at the National Defense University. Their opinions and revelations were just some of the many sparked in LinkedIn (as well as in Academia.edu and Twitter) by continuing whistleblower disclosures about the case before both the MSPB and the ICC.


Being a whistleblower is often not appreciated at the time the whistle is blown.


Martin Edwin Andersen is one example. Andersen has been a whistleblower for much of his life, repeatedly putting his career in jeopardy. Andersen and his fellow whistleblowers are aligned with the Government Accountability Project, which bills itself as the “nation’s leading whistleblower protection and advocacy organization.” He often uses the hashtag #WeAreNotSnowden to highlight the difference between his efforts to expose government mismanagement through legal channels, and the actions of Edward Snowden, who some government officials accuse of putting American lives at risk by leaking national security data.


“Every time one of us whistleblowers who plays by rules and tells truth to power is shot down,” Andersen tells The Progressive, “the bureaucratic swamp is essentially giving aid and comfort to Snowden” and others who choose to leak indiscriminately outside normal channels. 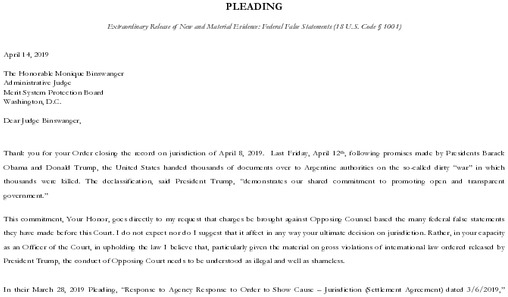 
Extraordinary Release of New and Material Evidence: Federal False Statements (18 U.S. Code § 1001) before the U.S. Merit System Protection Board by lawyers for the National Defense University regarding crimes against humanity in Latin America. 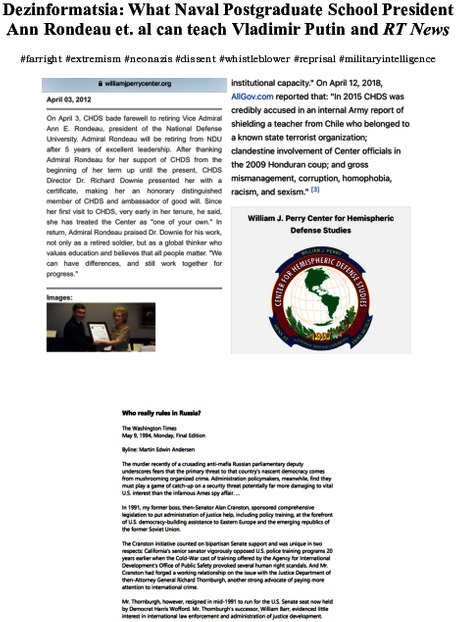 Every time one of us national security whistleblowers who plays by rules and tells truth to power is shot down and systematically pulverized by the complicit and morally bankrupt, the bureaucratic swamp is essentially giving aid and comfort to Edward Snowden, now ensconced in Vladimir Putin's police state, and others who choose to leak indiscriminately outside normal channels.

“As Malcolm X said when asked in 1964 about progress on racial discrimination: ‘If you stick a knife in my back nine inches and pull it out six inches, there’s no progress. If you pull it all the way out, that’s not progress. Progress is healing the wound that the blow made. And they haven’t even pulled the knife out, much less heal the wound. They won’t even admit the knife is there’.”


(A special thank you to a brave and talented former foreign service colleague, Ms. Tianna Spears, for blowing the whistle and reminding about the Malcolm X quote.

(Frau Ann E. Rondeau is now the president of the Naval Postgraduate School in Monterey, California.) 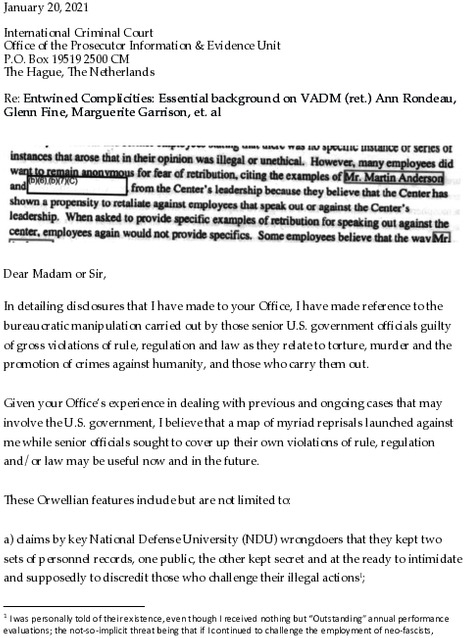 Download PDF (858.8KB)
"Every time we turn our heads the other way when we see the law flouted, when we tolerate what we know to be wrong, when we close our eyes and ears to the corrupt because we are too busy or too frightened, when we fail to speak up and speak out, we strike a blow against freedom and decency and justice." -- Robert F. Kennedy

A letter to the International Criminal Court, this filing says in part ...


In detailing disclosures that I have made to your Office, I have made reference to the bureaucratic manipulation carried out by those senior U.S. government officials guilty of gross violations of rule, regulation and law as they relate to torture, murder and the promotion of crimes against humanity, and those who carry them out.


Given your Office’s experience in dealing with previous and ongoing cases that may involve the U.S. government, I believe that a map of myriad reprisals launched against me while senior officials sought to cover up their own violations of rule, regulation and/or law may be useful now and in the future.


These Orwellian features include but are not limited to:


a) claims by key National Defense University (NDU) wrongdoers that they kept two sets of personnel records, one public, the other kept secret and at the ready to intimidate and supposedly to discredit those who challenge their illegal actions[1];


b) declaring non-violent protests to be the work of alleged NDU "security threats" who neither have nor had a record of either public or private violence while the most senior NDU leadership, including VADM Ann Rondeau, protected and defended those engaged in racism, sexism, homophobia, coup mongering, torture, murder and international terrorism (please see below);


c) boasting that, having previously served as a senior official in a branch of Department of Defense Office of Inspector General (DoD OIG), they knew how to manipulate the system and keep outside investigators, and thus legally-mandated oversight, at bay;


d) claiming that decorated national security and human rights truth tellers need to be "counseled" and "mentored" by those who repeatedly broke rules, regulations and laws, advocated death squads for third countries, and protected torturers and murderers both on staff and as overseas "partners;" 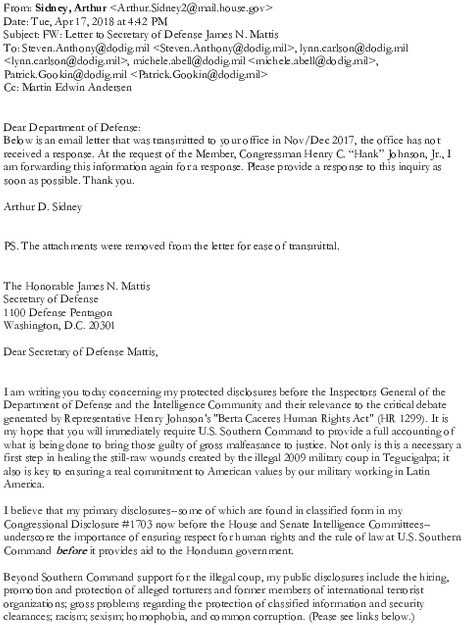 Download PDF (950.6KB)
This communication was sent to then Secretary of Defense James N. Mattis in late 2017 by the office of Congressman Henry C. “Hank” Johnson, Jr. It specifically referenced protected disclosures before the Inspectors General of the Department of Defense and the Intelligence Community and their relevance to the critical debate generated by Representative Johnson's "Berta Caceres Human Rights Act" (HR 1299).

The failure of the Department of Defense to bring into account those at the National Defense University who offered support for the illegal 2009 military coup in Honduras while VADM Ann Rondeau was the NDU president, and the fact that Rondeau went on to head the Naval Postgraduate School, in part lead for the case against her and others at the Pentagon's university to be sent to the International Criminal Court. In addition, Rondeau was responsible for her minions' Orwellian tactics against national security whistleblowers inside NDU who fought to bring to light her minions' support for neo-Nazis and others who committed crimes against humanity in Latin America and who went on to receive American taxpayer dollars.


Please read the attached, then the following articles (below):


The US military trained him. Then he helped murder Berta Cáceres
https://www.theguardian.com/global-development/2021/dec/21/the-us-military-trained-him-then-he-helped-berta-caceres


Rondeau is also listed as faculty at Wellesley College.
https://www.wellesley.edu/albright/about/faculty/vice-admiral-ann-rondeau
https://www.academia.edu/66722951/SNAFU_De...
Add Your Comments
Support Independent Media
We are 100% volunteer and depend on your participation to sustain our efforts!