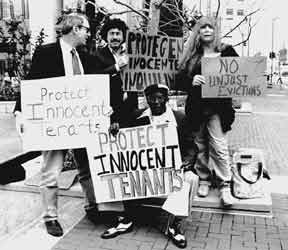 The above photo was taken on April 12, 2000, at a rally in front of the Federal Building at 1301 Clay St., in Oakland, to protect Herman Walker, and three other elderly tenants that were facing eviction in Oakland because of HUD’s notorious one strike policy. Stronger tenant protections have been needed for many years and it would really help save tenant's housing by abolishing HUD’s one strike policy, and the Costa-Hawkins Act as a way to protect tenants in Oakland, and throughout California.

According to a flyer I have promoting the April 12, 2000 rally in front of the Federal Building in opposition to HUD’s one strike policy, in large bold letters it states, “Protest The Lack Of Fair Housing Laws In Oakland — We Must Have Just Cause.” It was barely three months earlier on January 29, of 2000, that tenant activists, attorneys, organizers, and tenants in Oakland came together at the Oakland Library to form or create the Coalition for Just Cause.

Anne Omura of the Eviction Defense Center may be seen speaking out about the displacement of low-income tenants in Oakland by clicking here.

Even now with marijuana being legal in California, Public Housing tenants, Section 8 tenants, and low-income tenants in subsidized affordable housing projects run by nonprofit housing developers, tenants can be evicted by because of HUD’s one strike policy if they are found possessing, or smoking marijuana.

During 2021, covid-19 was a brutal year for tenants because reportedly many landlords are engaging in harmful and fraudulent acts to evict tenants, despite available rental assistance (ERA) to save the tenants from becoming evicted, and unhoused, or made homeless.

According to a recent survey of 119 legal aid and civil rights attorneys in 41 states, D.C. and Puerto Rico by the National Housing Law Project (NHLP), legal aid attorneys reported that they have been observing the following problems since the CDC's federal eviction moratorium ended recently.

Additionally, according to the National Low-Income Housing Coalition, a December 20, 2021 report details how increasing evictions may vary across the nation since the federal eviction moratorium came to an end recently.

A pandemic that may have just been made worse because of the new CDC guidelines lessening the period covid-19 infected persons shall remain sheltering-in-place, or quarantined, reportedly because of political pressure of the airlines who want the CDC to loosen restrictions meant to protect the public.