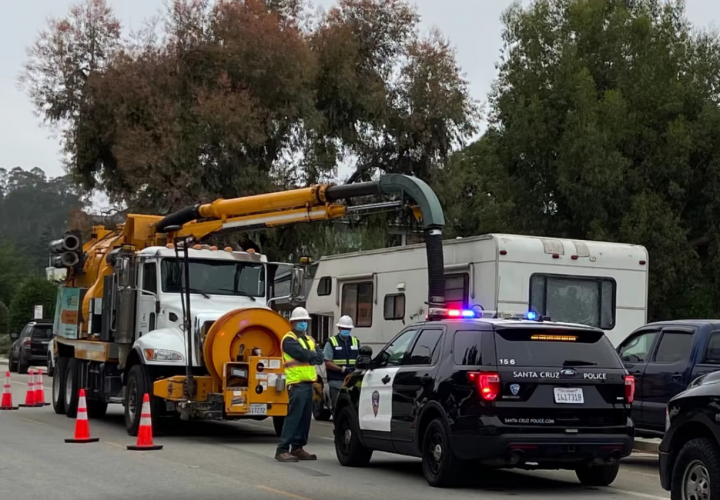 In August of 2016 the California Coastal Commission struck down a previous attempt by the Santa Cruz City Council to ban recreational vehicles from parking overnight in the city because the ban impeded coastal access.

Alicia Kuhl, President of the Santa Cruz Chapter of the California Homeless Union is on the record as opposing the new proposal.

"They need to go through the coastal commission and get the permit and allow the appeal process to continue," Kuhl stated. "These Karens are trying their best to avoid the proper procedures to get their way and make things harder for homeless folks." 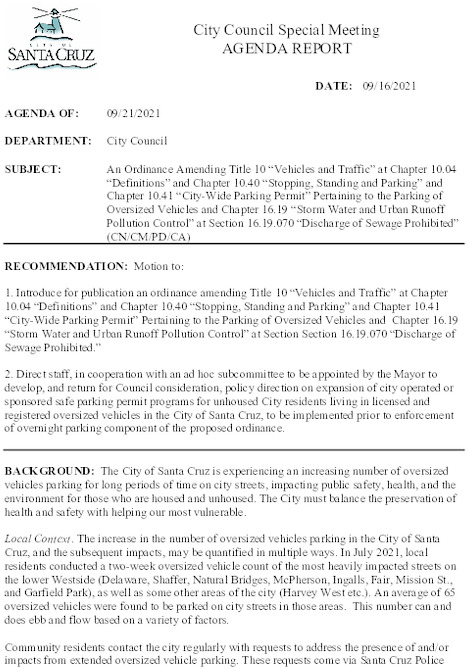 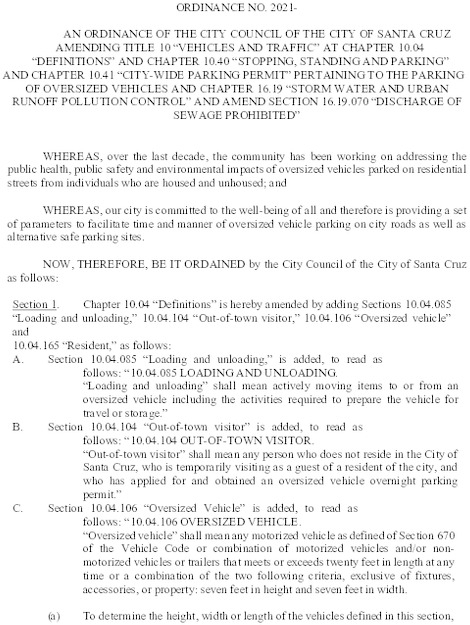 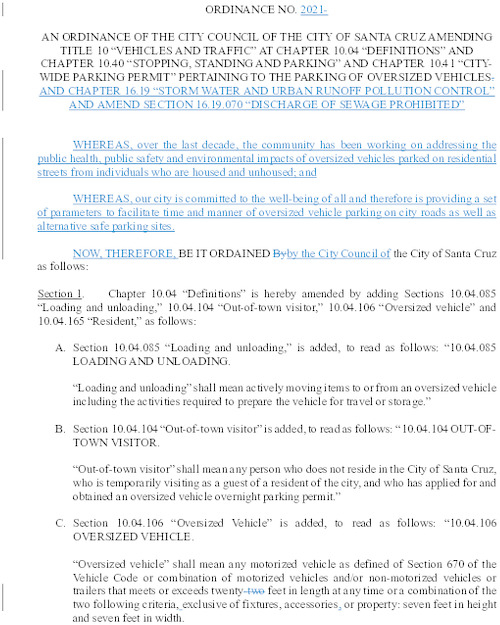 Download PDF (126.9KB)
https://ecm.cityofsantacruz.com/OnBaseAgendaOnline/Meetings/ViewMeeting?id=1767&doctype=1
§A familiar brew of bigotry masquerading as "public safety".
by Robert Norse (rnorse3 [at] hotmail.com)
In 2016, I and others successfully appealed the local Coastal Commission's surrender to NIMBY forces and secured an 11-1 vote on the broader Commission stopping the anti-homeless nighttime RV ban.

I presented the following arguments to the broader Commission at https://www.indybay.org/uploads/2016/08/11/notes_for_a_coastal_commission_speech__final_flyer.pdf ["Protest the Poor and Public Access for All"] . The full Commission turned down the report of their local body--which then and now seem to be uninterested in ensuring equal access to the Coast for rich and poor.

I wrote up my take on the struggle at https://www.indybay.org/newsitems/2016/08/11/18790030.php ["Unexpected Victory at Coastal Commission Overturning Nighttime RV Ban"].

Those fighting this latest attack on poor people living in their vehicles may want to keep close tabs the progress of this law, all prettied up with simpering claims of concern for those RV dwellers.

In order to maintain standing, it may be necessary to file a written objection, even to make a formal appeal to the administrative body and claim that the law does not meet the requirements of the local Coastal Commission.
Has the number of actually usable RV spaces significantly increased (even given the massive infusion of COVID funding)?
How accessible is the Association of Faith Communities program? Would be directors of the program like Steve Pleich as well as the titular head of the program have declined to give straight answers to questions repeatedly posed.

The basis of the Coastal Commission's refusal to ban RVs at night (i.e. regarding it as a "substantial issue" which the City chose not to take up in a formal hearing were (a) lack of evidence of a crime problem, and (b) inadequate accommodations for "oversized vehicles".

It might also be helpful to point out the continued violation by City and County authorities--the "no parking at night without permits" in the Coastal zones, without authorization from the local Coastal Commission. NOt to mention the harassment by sheriffs and police of legally parked vehiciles whose appearance frets neighbors concerned about their property-values.

Also, "calls for service" are not criminal citations. And citations are not criminal convictions. Those seriously opposing this law will be well-advised to make Public Records requests demanding the actual citations given, the zones they were given in, and (though this may be more difficult to uncover) the ultimate verdicts.

The War against the Poor has been heating up in various communities--with sweeps against the unhoused here in Santa Cruz at HIghway 1 and 9, and new harassment reported in the Benchlands. The hunger of the well-to-do to clear away the ill-clothed, ill-housed, and "unsightly" is never ending. We must meet the challenge or be bulldozed over and skyscrapered under.
END_OF_DOCUMENT_TOKEN_TO_BE_REPLACED
Add Your Comments
Support Independent Media
We are 100% volunteer and depend on your participation to sustain our efforts!