Add an Event
Newswire
Calendar
Features
Home
Donate
From the Open-Publishing Calendar
From the Open-Publishing Newswire
Indybay Feature
Related Categories: California | Central Valley | Environment & Forest Defense | Racial Justice
Protest Statewide Against CalEPA, DTSC
by Janet Johnson
Tuesday Aug 24th, 2021 5:39 PM
CalEPA and DTSC are in bed with the polluters, lobbyists and corporate developers and are neglecting environmental justice communities, while our children are sick and dying. Protest at the Cal EPA Building in Sacramento on August 30. 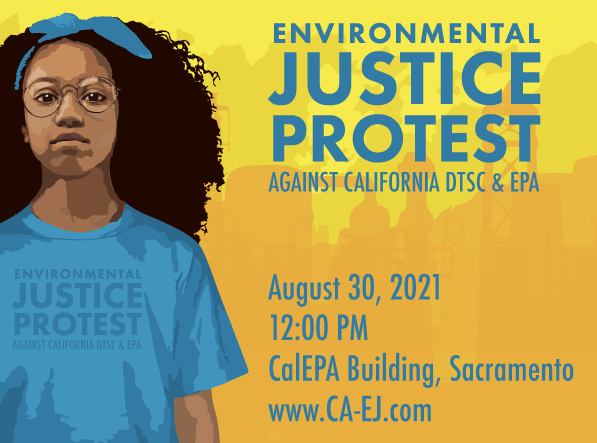 As part of a decades-long struggle to hold the California Environmental Protection Agency (CalEPA) and the Department of Toxic Substances Control (DTSC) accountable to their promises to protect Californians from toxic contamination, a statewide coalition of community and environmental justice groups will converge on the CalEPA Building in downtown Sacramento at noon on August 30. They are asking that CalEPA and DTSC take immediate action to protect their communities, and their demands will be amplified by art and street theater. A full bedroom set will be brought to the protest, with volunteers representing CalEPA, DTSC, lobbyists, corporate developers and polluters in bed, drinking champagne and smoking cigars.

The groups contend that years of neglect, bad management, and denial have left residents across California, their children, and the environment poisoned by radioactive and toxic waste sites. Industrial and military facilities contaminated with hazardous and radioactive wastes are disproportionately located in low-income, working class and communities of color, and the groups say residents and the environment are at risk due to inadequate cleanup and remediation of these sites.

“DTSC and CalEPA are refusing to follow science and protect the health of vulnerable communities,” said Melissa Bumstead, founder of Parents Against Santa Susana Field Lab in Simi Valley. “We were promised a comprehensive cleanup of the radioactive and chemical waste site near our homes would be completed by 2017. The soil cleanup hasn’t even begun.” Melissa’s daughter and other children in her community have been diagnosed with rare cancers and other serious health issues.

“These state agencies have broken their commitment to work with industry to reduce the generation of hazardous waste in order to lessen the amount of toxics dumped at commercial facilities,” added Thomas Helme, director of California Environmental Justice Coalition (CEJC), which represents 78 California environmental justice organizations. The groups seek to halt dumping at two hazardous waste landfills, citing racially discriminatory practices and noting that these sites’ permits have expired. The sites are located in the Central Valley towns of Buttonwillow and Kettleman City next to disadvantaged Latino communities.

https://www.ej-ca.com/
Add Your Comments
Support Independent Media
We are 100% volunteer and depend on your participation to sustain our efforts!