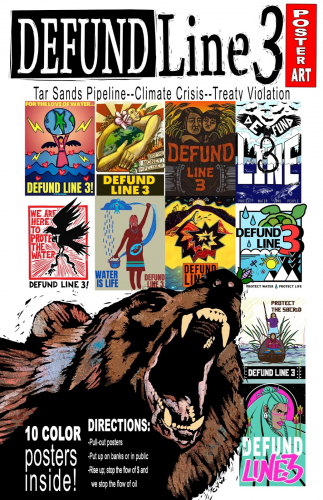 The Line 3 pipeline is a project of Canadian fossil fuel company Enbridge, to expand their exports of tarsands oil. Enbridge is more than 60% done constructing their proposed Line 3 project, and on July 15 the last restrictions keeping them from drilling under waterways where wild rice grows were lifted. We anticipate Enbridge attempting their final river crossings, including one under the headwaters of the Mississippi, in late July.*

We were part of a team that went to support indigenous water protectors in Minnesota at the beginning of June. We joined an action in San Francisco on Friday July 16th, where Michelle was among the five who willingly risked arrest and were cited at the Army Corps of Engineers offices, doing what we could to draw attention to this critical issue. This letter explains the intent of that action; the Army Corps of Engineers issued the permit to Enbridge, and they or President Biden could act to immediately revoke it.

We envision a big push for publicity locally, starting as soon as we can manage (probably starting Thursday July 22nd). The Anishinaabe women of the RISE Coalition are now calling on people to join them in northern Minnesota to protect the wild rice waters July 19-31.*  We’d like to offer an option for those who aren’t ready or able to travel to Minnesota to be acting in support locally. We’ve set up a sign-up form here - https://forms.gle/qcQdrSbxMocZRBSc9

Our vision is to have demonstrations around town, perhaps on Pacific Ave. or at the local branches of banks that are funding Enbridge’s Line 3 project.  We have a beautiful collection of posters to use as signs. We’d like to pass out small flyers with info about moving money out of these banks, plus info about petitions to sign, and/or a short script to call White House and Jaime Pinkham, Acting Assistant Secretary of the Army for Civil Works, the key decision-makers who could halt the project immediately.

This link takes you to a national petition from the Sierra Club to the key decision makers.

This is urgent. This matters, for our integrity as a country, and for the future well-being of people in Minnesota and all around the world. We must protect the sacred lands and waters from the potential of pipeline leaks. We must honor our treaties with indigenous tribes. We must stop tar sands pipelines to prevent climate catastrophe. We must halt construction on Line 3.

Please join us in this call to action, and share widely with local climate activists.

§#StopLine3 Demonstration: Friday, July 30, 4pm
by Santa Cruz Climate Action Network
Tuesday Jul 27th, 2021 12:31 PM
We will rally at the corner of River St and Water St, downtown Santa Cruz (at Bank of America – one of the main fossil-fuel funders). After demonstrating there for a while, we will walk down River St (to oilyWells Fargo – another major fossil-fuel funder), then down and up Pacific Avenue.

More information:
#StopLine3 Demonstration
https://www.indybay.org/newsitems/2021/07/27/18844015.php
Add a Comment
Support Independent Media
We are 100% volunteer and depend on your participation to sustain our efforts!