Add an Event
Newswire
Calendar
Features
Home
Donate
From the Open-Publishing Calendar
From the Open-Publishing Newswire
Indybay Feature
Related Categories: San Francisco | Anti-War | Media Activism & Independent Media
"Free Assange Now! On Assange's 50th Birthday Rally At UK Consulate To Demand His Freedom
by Labor Video Projecct
Sunday Jul 4th, 2021 10:15 AM
On the 50th birthday of Julian Assange, a solidarity rally was held at the UK consulate in San Francisco. Participants spoke out on the issues and also celebrated his birthday with a cake. 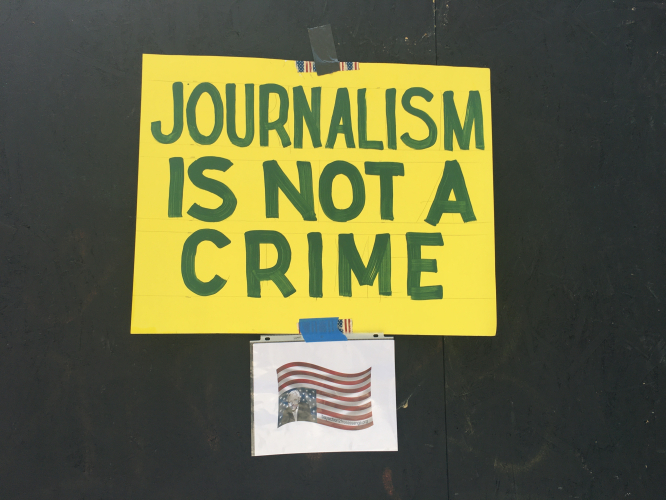 original image (4032x3024)
On the 50th birthday of Julian Assange dozens of supporters of the founder of Wiki Leaks rallied and spoke out at the British consulate in San Francisco.
They also had a cake to honor his birthday. He is still imprisoned by the UK government under draconian conditions for false charges by the FBI and other government agencies that want him
extradited to the United States where he could be imprisoned for up to 175 years.

The US government both Democrats and Republican are prosecuting Assange for "espionage" although he is not a US citizen and this threatens all journalists an published who expose the crimes of US imperialism and illegal wars around the world.
This also included the recent bombings in Iraq and Syria which are war crimes under the Biden administration and violate international law.
This rally took place on July 3, 2021

Additional media:
Journalism Is Not A Crime! War Crimes Are! Oakland Meeting For Julian Assange With Brother Gabriel and Father John Shipton
https://youtu.be/NHOyCRuuLy8 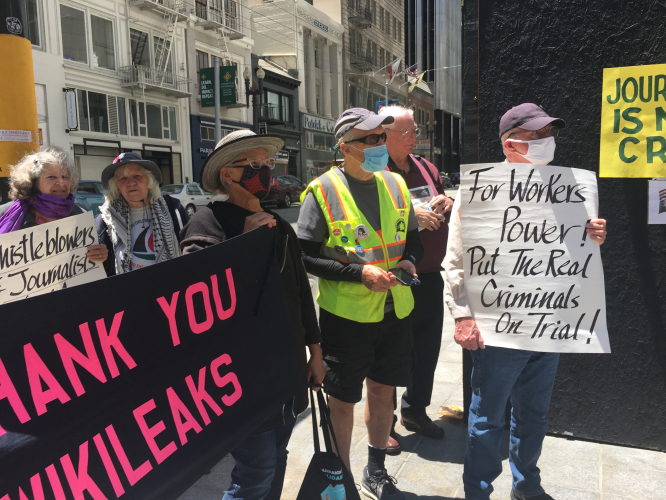 original image (4032x3024)
Participants of the solidarity rally on the 50th birthday of Julian Assange demanded his freedom and also said the real war criminals should be put on trial that are running the US and UK governments.
https://youtu.be/ucoM7Mj3opM
§Birthday Cake For Julian Assange
by Labor Video Projecct
Sunday Jul 4th, 2021 10:15 AM 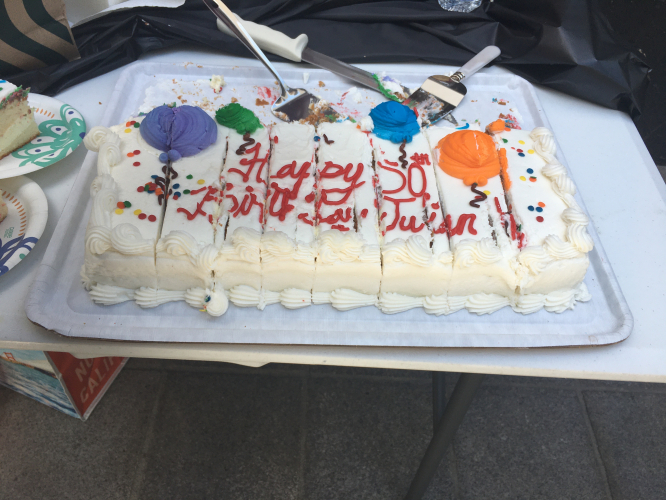 original image (4032x3024)
A birthday cake for Julian Assange to celebrate his 50th birthday was part of the event.
https://youtu.be/ucoM7Mj3opM
§A Justice Lawyer Speaks Out For Julian Assange
by Labor Video Projecct
Sunday Jul 4th, 2021 10:15 AM 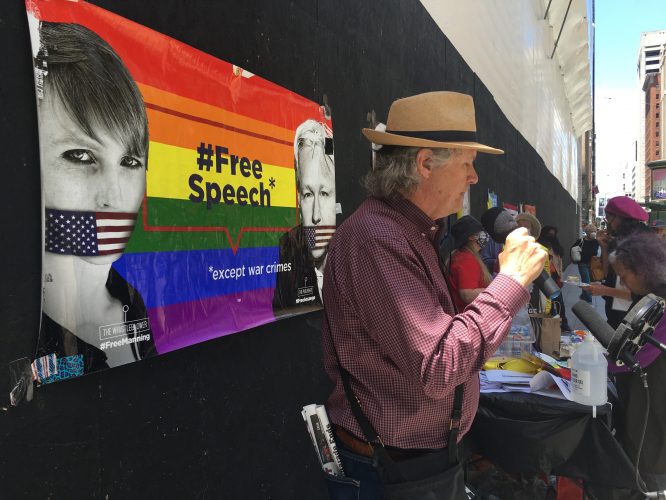 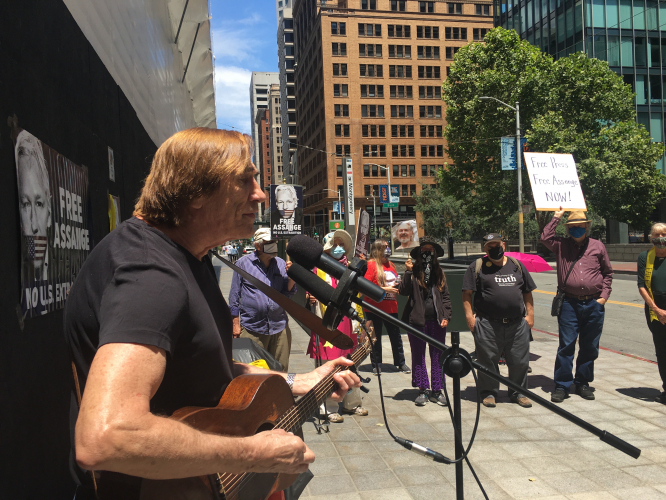 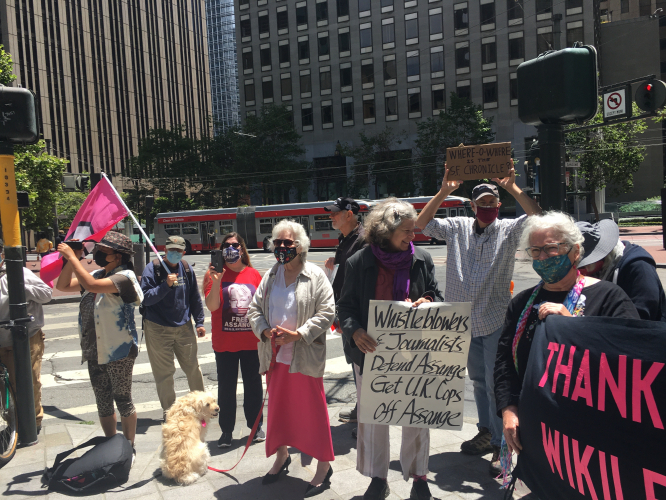 original image (4032x3024)
Participants at the rally for the freedom of Julian Assange on his birthday
https://youtu.be/ucoM7Mj3opM
Add Your Comments

§Doctors for Assange
by repost
Thursday Jul 8th, 2021 8:33 AM
Some 250 medical doctors for Assange have called for the release of Julian Assange. See https://consortiumnews.com/2021/07/07/doctors-tell-biden-let-assange-go/
Quotable quotes:
"More than 250 doctors around the world have written to Joe Biden to tell him to drop the Espionage Act charges against Julian Assange in retaliation for publishing critical information about the United States."

"Doctors for Assange [i] joins politicians, human rights, press freedom, and rule of law advocates across the globe in urging you to end the unwarranted U.S. legal persecution and torture of Julian Assange, by dropping all charges against him now. The Trump administration’s efforts to entrap a publisher in an extradition scheme, for the purpose of subjecting an Australian citizen to the U.S. Espionage Act, have violated judicial due process, international law, press freedom and human rights. We implore you to end the misguided case you have inherited that violates the bedrock principles of our democracy."

"Doctors for Assange is alarmed by recent reports that Julian Assange continues to suffer severe psychological abuse in HMP Belmarsh Prison. Having won his case against extradition to the United States on unprecedented Espionage Act charges against him as a publisher, the U.K. judge nevertheless is holding Mr. Assange in unjustified indefinite detention pending your appeal of the decision."

"Today, the U.K. High Court granted the U.S. limited permission to appeal the earlier U.K. ruling against the U.S. extradition request. Crucially, the High Court did not permit the U.S. to appeal findings based on Assange’s medical and psychological status, and affirmed the previous judge’s findings regarding his clinical condition. The doctors note that in light of this ruling, the U.S. “avenues for appeal appear limited.”"

"Meanwhile, Mr. Assange continues to suffer serious, life threatening effects of the psychological torture he has been subjected to for more than a decade. His partner, Stella Moris, reports Mr. Assange is having “severe episodes” in prison, and that he is suffering “mental turmoil.” These symptoms, like the psychological trauma and suicidal ideation evidenced during Mr. Assange’s extradition hearing last Fall, are expected consequences of psychological torture, as reported by the United Nations Rapporteur on Torture, Nils Melzer."

"Although the judge decided against extradition based on oppressive conditions in U.S. prisons, which would place Mr. Assange at high risk of suicide, the U.S. appeal of that decision keeps him in conditions amounting to cruel, inhuman and degrading treatment in the U.K.. While detained pending progression of the U.S. appeal, Mr. Assange remains in maximum security conditions, held in the U.K.’s most punitive and repressive prison despite being a non-violent prisoner who has not been convicted of any crime. His risk of suicide or death from prolonged psychological torture and medical neglect remains high. [ii] Moreover, Mr. Assange remains at high risk of both contracting and suffering the worst outcomes of COVID-19."

"In addition, Mr. Assange’s continued pursuit by the Biden Administration calls into question the legitimacy of the United States’ stated commitment to press freedom, civil liberties and human rights. The world’s leading authorities in such matters, including Amnesty International, Reporters without Borders, the Freedom of the Press Foundation and the International Bar Association Human Rights Institute, to name a few, are unequivocally denouncing the U.S. Government’s pursuit of Julian Assange. Cross-party groups of parliamentarians from the U.K., Australia, Germany and Italy, have weighed in as well, warning that the extraterritorial reach and unprecedented criminalization of publishing activity threatens journalists and freedom of speech worldwide."

https://consortiumnews.com/2021/07/07/doct...
Add a Comment
Support Independent Media
We are 100% volunteer and depend on your participation to sustain our efforts!