On April 19, Oakland resident Mario Gonzalez, 26, died while being pinned to the ground by Alameda police officers. His family is now demanding answers from the Alameda Police Department and the city of Alameda, and that Alameda County DA Nancy O'Malley charge the three officers involved in the incident. The incident occurred the day before Minneapolis police officer Derek Chauvin was convicted of second-degree unintentional murder, third-degree murder and second-degree manslaughter in the killing of George Floyd. [Video from the vigil below text. Artículo en español aquí.] 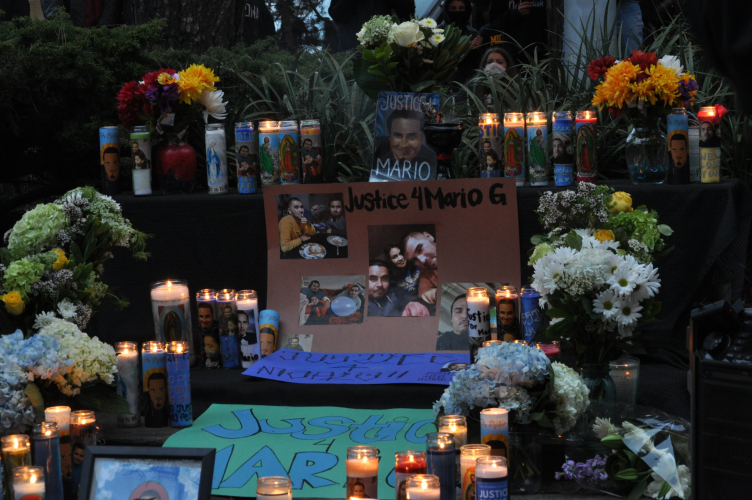 On Wednesday, April 21, more than 100 people gathered at Scout Park in Alameda for a vigil that was equal parts commemorating the life of 26-year-old Mario Gonzalez, a father and Oakland resident, and rallying to demand justice for Mario. The vigil was attended by Gonzalez's family members, including his mother, Edith Arenales, and brother, Jerry Gonzalez. Mario's four-year-old son, little Mario, was also present. At the vigil, his family revealed that Gonzalez was a caretaker for another one of his brothers, 22-year-old Efrain, who is on the autism spectrum. Said during one of the family members' speeches about the relationship: "Mario would take care of him. He would bathe him, shave him, fix his hair. As it stands right now, the kid can’t eat, sleep, he keeps asking where Mario is."

- Releasing Mario Gonzalez's body to the family so they can conduct an independent autopsy and lay him to rest
- Release any available audio and video, including the footage from the body-worn cameras
- Release the records and names of the officers involved as required by California law SB [Senate Bill] 1421
- Independent investigation into the murder of Mario Gonzalez

On Wednesday, April 28, the city of Alameda released the names of the three officers involved: James Fisher, Cameron Leahy and Eric McKinley. All three have been placed on administrative leave with pay and benefits. The body-worn camera footage also revealed a fourth person involved in detaining Gonzalez: Charlie Clemmens, a civilian parking enforcement employee for the Alameda Parking Department.

"The Alameda Police Department needs to explain why a perfectly healthy man who was never charged with a crime was killed in their custody," said Gonzalez. "The Alameda Police Department has released no facts about why they killed Mario. What they are saying does not make sense. Mario did not die of 'medical complications' because he was healthy and did not have medical conditions. We know that there was no 'scuffle' because Mario was not a violent person. We need answers and we cannot trust their version of the story."

To amplify the family's demands, two well-known community organizers spoke at the vigil: George Galvis, co-founder of Oakland-based CURYJ, and Cat Brooks, co-founder of the Oakland-based group Anti-Police Terror Project that's leading the Defund the Police movement in Oakland. Another speaker was Amanda Majail-Blanco, the sister of Erik Salgado, 23, who was killed by California Highway Patrol in Oakland last June.

Roughly translated into English, Arenales said: “My son Mario was a son, a healthy, non-violent person, a loving father, an understanding son, a person who had a lot of value in the community. And for my family it's like they cut off my arm."

In response to a question about how to support the family, Brooks responded by saying: “If you’ve got services to offer, if you got time to run errands, if you’re a healer, contact us. Anything else this family asks for, show up and do it."

The video of Edith Arenales, Mario Gonzalez's mother speaking was recently retweeted by Meganoticias, a television program based in Mexico City. The video has garnered more than 42,000 views.

On Tuesday, April 27, the family held a press conference in front of Alameda City Hall and the Alameda Police Station. The family announced that they had watched the police body-worn camera footage of the moments leading up to Mario Gonzalez's death. "Watching that video reaffirmed our fight for justice for Mario," his brother Jerry wrote in an update on Mario's fundraiser.

Due to the nature of the video, it will not be embedded into this piece. Those who want to watch the video can do so here.

The nearly hour-long video show footage from the body-worn cameras of Alameda police officers Eric McKinley and James Fisher. The video first starts with two phone calls made on Monday, April 19 to Alameda Police Department from two individuals who expressed concerns about a man they described as Hispanic or Indian. "There's a man in my front yard talking to himself and no mask and he's not making any sense," said one of the callers, who shared that their "dogs didn't like him" and that they had a baby. "He's hanging out but I don't think he's actually doing anything wrong. He's not doing anything wrong. He's just scaring my wife." The second caller told the police that the man had two baskets containing alcohol bottles. "It looks like he's breaking the security tags off," said the caller, who added that he didn't see any weapons on the man, and that the man only had a hair comb that he was using to brush his hair.

When Alameda police officer Eric McKinley arrived to Scout Park, he could see Mario Gonzalez standing nearby two baskets. Dialogue was exchanged between the two for several minutes. Gonzalez denied wanting to hurt himself when McKinley asked, and repeatedly stated, "Something is going on." Gonzalez is seen leaning against a tree for support at one point. After Alameda police officer James Fisher arrives to the scene, McKinley asks Gonzalez if he has ID on him. "If you can't do that, then I'm going to have to take you," said McKinley. When Gonzalez puts his left hand in his pocket, both police officers move toward Gonzalez and ask him to keep his hands out of his pockets. They then take ahold of Gonzalez's arms and attempt to restrain him with handcuffs. Gonzalez is then forced to the ground and for more than five minutes, Alameda police officers have their knees and arms on top of Gonzalez's back and chest. Gonzalez can be heard groaning, retching and screaming. Gonzalez also repeatedly cries out "I'm sorry," as well as other statements that are too muffled to clearly understand. "I think you just had too much to drink today, that's all," McKinley told Gonzalez. McKinley then asks another officer, "Think we can roll him on his side?," said McKinley. "I don't want to lose what I got, man," is the response from the other officer. "Okay," says McKinley. "We have no weight on his chest, right?," said an officer, which was misheard by McKinley, who promptly adds weight on Gonzalez's chest. "No, no, no, no weight, no weight," an officer says to McKinley after seeing him add his knee on Gonzalez's back. At the 22:39 mark, police turn Gonzalez on his side, and find him unresponsive to their calls. Police then perform CPR on Gonzalez. "No pulse," can be heard multiple times coming from Alameda police as they check for signs of life in Gonzalez. While other officers continued performing CPR, Alameda officer Cameron Leahy gave Gonzalez two doses of Narcan, used for opioid overdoses, at the scene. Two doses of Narcan is equivalent to 8mg, according to an officer in the footage at the 28:20 timestamp.

Two active petitions by the family make further demands. The first petition with more than 1,280 signatures demands that Alameda County District Attorney Nancy O'Malley "charge the three officers who killed Mario Gonzalez." The petition acknowledged that the DA has opened an investigation on the death of Mario Gonzalez while in police custody. The second petition demands that Alameda City Council "address the family demands and enact much needed change in our community to keep people safe from police." The city of Alameda is also the location of a recent incident in January on MLK Day, involving a man holding a rifle approaching and threatening a caravan of people that included children and elderly people.

Insider reported that in 2020, there were only 18 days that the police didn't kill somebody. Black and Hispanic people continue to be disproportionately shot and killed by police in the U.S. 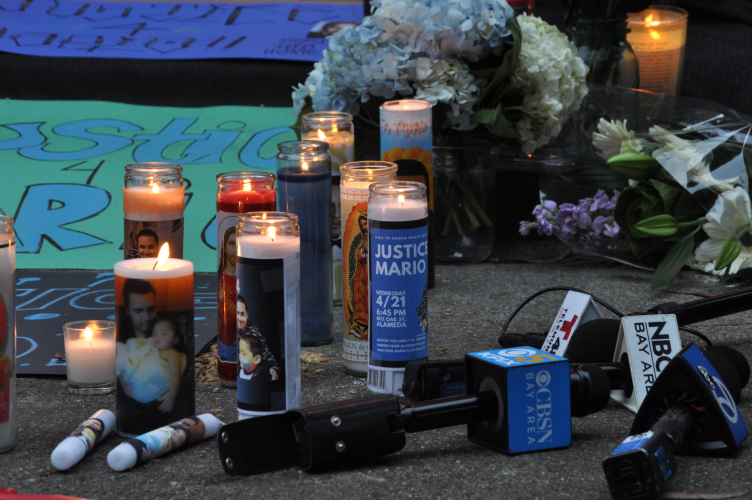 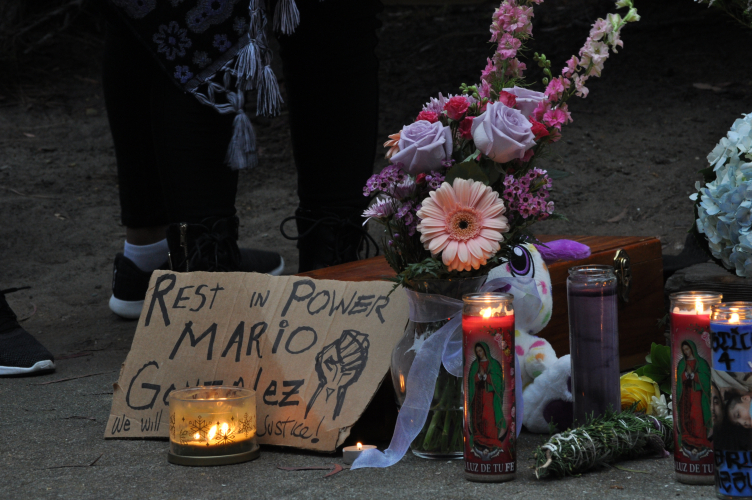