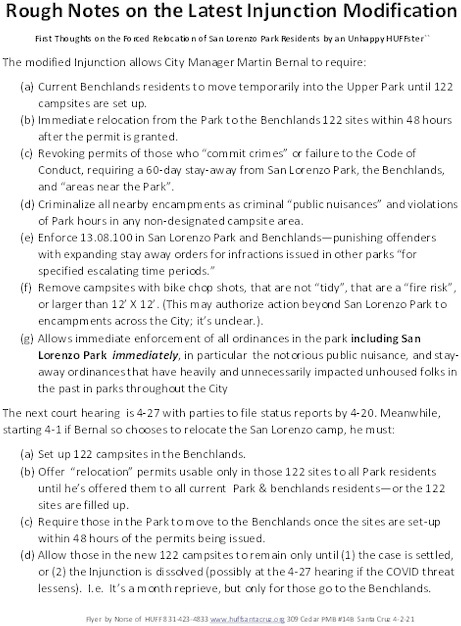 Download PDF (521.4KB)
122 SPACES--CAMPGROUND OR CONCENTRATION ZONE?
The Injunction, as modified, requires the residents of the Upper Park to leave within 48 hours of being offered permits, once the 122 sites in the Benchlands are mapped out. It also requires depopulation of the area along the riverbank and areas adjacent to San Lorenzo.

Those living in those areas are told to move up to the Park while the concentration area is prepared and then either move to one of the 122 sites or out of the area entirely.

Those in the 122 sites will have no stability either. They will likely have to vacate the sites once there is widespread vaccination and/or a drop-off in the COVID infection rate. This is likely to be an issue a short four weeks down the road at the April 27 hearing. The issue of this frequent rousting of individuals, many of whom are disabled in different ways, is something else ignored both in the order and the attorney presentations.

Campers are compelled on threat of expulsion to use "Hygiene units", but the City is not specifically required to provide them.

CODE OF CONDUCT--MANY EXCUSES FOR EVICTION
It's unclear whether many people living in the Upper Park will likely accept a code that treats adults like minors or incompetents.

Nor is it clear who will enforce this code and whether it will serve as an overbroad tool to selectively remove those who authorities don't want there.

Who will be enforcing a code of conduct which bans all drug and alcohol use even within the privacy of tents--in a population which includes many with substance abuse problems in a city with few treatment alternatives?

Instead of an autonomous camp, as proposed the SC Homeless Union or an agreement camp, as supported by Brent Adams and his Footbridge Services, or even a more generously-run County campground as operated last summer, you have what really amounts to a zone where people living in the park can be shuffled to until the COVID crisis lessens and then dispersed into the mist.

One hopes that Van Kuluen's specific citing of California Penal Code 602 providing misdemeanor (i.e. jail) penalties for tearing down fences, building fires, "trespassing", and "refusing to leave" are not invitations for police repression of residents and their supporters engaged in peaceful but forceful resistance to unjust authority threatening the survival of the vulnerable.

The Injunction language seems to suggest that MC 13.08.100 sweep may expand beyond San Lorenzo Park and the Benchlands to all City parks and greenbelt areas. This provision allows cops and "rangers" to unilaterall impose 24 hour, 1 week, 1 month, 1/2 year, or 1 year officer-initiated Stay-Away orders from San Lorenzo and all other parks where minor infractions have been charged.

The order may give a federal stamp of approval to unconstitutional due-process-free Stay Away orders. These were used in the hundreds over the last few decades for camping and curfew violations overwhelmingly for homeless people.

It also weaponizes MC 13.08.090 "Disorderly Conduct on Park Property" which reads (a) Any person who willfully harasses or interferes with a city of Santa Cruz employee in the performance of his or her duties in a city park or beach shall be guilty of a misdemeanor.
(b) Any person who, by his or her conduct, or by threatening or abusive or profane language, willfully molests or unreasonably interferes with the use of a city park or beach by any other person shall be guilty of a misdemeanor. So cursing back at anyone has become a jailing offense? With the backing of the federal Court?

LOOKING BACK
For more than two months, I've sought to get the full file of documents and exhibits from Union attorney Anthony Prince without success. Appeals to the Union of the Homeless officials locally had no effect. Without knowing what evidence is being presented to the Court, it's hard for the community, the Park residents, and/or sympathetic activists to create a positive response.

Prince suggested some modifications to City Attorney Tony Condotti's "sweep them away, but look good while you're doing it" order such as having a SC Homeless Union official present if a camper were being expelled from Camp 122. That was rejected by the Judge.

Additionally it is my understanding that Prince, while suggesting, largely unsuccessfully, that a number of provisions be struck from City Attorney Condotti's "move 'em out" order, Prince prepared no separate alternative order emphasizing the past false promises of City for alternative shelter and services, the lack of shelter services in the City, and the implications of the Martin v. Boise decision.

Nor did Prince mention, as far as I know from listening to the two hearings, the infamous TOLO law banning day-camping most everywhere in town, now on the books and likely to be ratcheted up even tighter.

Most important, it's not clear how fully the proposed Code of Conduct as well as other provisions were raised in group meetings with the San Lorenzo camp residents themselves

None of this is to disparage the importance of Prince taking up the cudgels for homeless people when other attorneys--local and distant--have declined to do so.


WHAT NOW?
Whatever Camp supporters want to do, they had best prepare quickly.

While the work of Prince and the Homeless Union was impressive and timely in securing the TRO and subsequent Injunction this Winter, equally important was the willingness of the supporting community standing up to City Manager-mandated police bullying in late December.

Camp residents spoke out last Sunday in the Park at a meeting chaired by Keith McHenry of the S.C. Homeless Union. Community activists attended and listened, but no proposed plan of resistance was suggested.

The basic issue is--as it has always been--simple. Displacing those without shelter without providing alternative shelter is a form of cruel however usual punishment. It is something at least one segment of the Community has grown weary and angry witnessing. It is also a failed policy.

So one possible path of resistance is for housed individuals to suggest to City authorities that if they move on any homeless encampment in Santa Cruz without offering alternative accommodations, activists will set up a survival encampment at some suitable location (downtown, City Hall, Ross Camp, a park, on the sidewalk outside the Mayor's house) themselves and invite those outside to join them.

If housed individuals announce they will be taking the lead--as they did in San Lorenzo Park in late December, it will not be homeless people on the front line, but "respectable" community members.

These are just my impressions. Read the documents (what few that have been released), listen to the hearing and decide for yourself what's going on here.

However time to organize is short as the City's spring tourist-pleasing juggernaut rolls forward, and nasty neighborhood NIMBY's press forward with their "out of sight, out of town" TOLO law.

Chief Mills continues to receive full-funding for his SCPD--here as elsewhere, toxic in its lack of accountability and reliance on force and fear. Remember, the TOLO law is only one of 7 scummy sins that Mills was parading around town to the applause of neighborhood bigots a year ago. Now that he has a subservient Council majority, it's likely full-steam ahead.

I'll be giving my analysis of the hearing likely on my Sunday netshow at. http://www.huffsantacruz.org/Lostshows.html My preliminary thoughts I've put out in a flyer which I post here. The full hearing can be heard without my commentary at https://www1.huffsantacruz.org/lost/Court%20Hearing%203-30-21.mp3 .under "Latest Show April 4, 2012".

Meanwhile it may give hope to some to know that elsewhere in California, others are resisting the right-wing roll-up of poor people outside: See https://www.indybay.org/newsitems/2021/03/12/18840747.php ("Homeless in Novato: Should They Stay or Should They Go?") 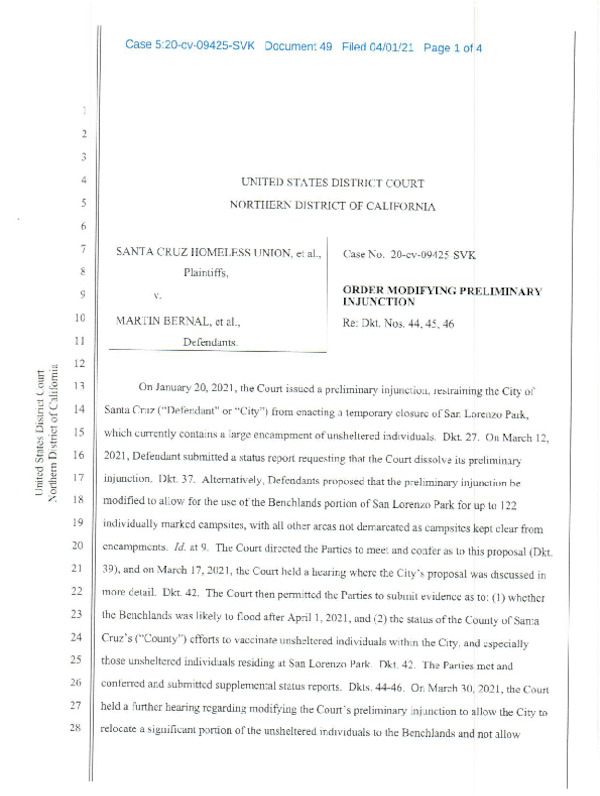 Download PDF (2.5MB)
As with the TOLO law, other than for a very limited period of time, this Order provides no place for the San Lorenzo park and benchlands homeless to go, not to mention the hundreds of other homeless who may be impacted by this Order in other parks and camps.
Add Your Comments
LATEST COMMENTS ABOUT THIS ARTICLE
Listed below are the latest comments about this post.
These comments are submitted anonymously by website visitors.