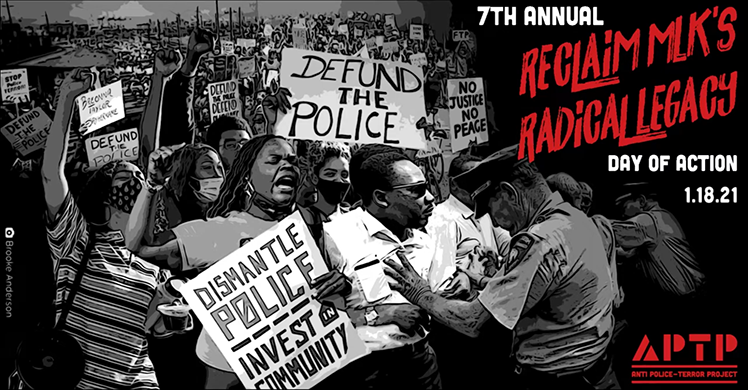 It will culminate on January 18, MLK Day, with a mass car caravan from the Port of Oakland to Eastmont Mall, demanding that we reinvest 50% of the Oakland Police Department’s dollars to community supports and services that actually keep us safe.

The people’s demands for the weekend & caravan are:

• Discontinue unauthorized overtime by OPD; and

• An immediate response to the violence in our streets that is NOT rooted in the carceral state.

The weekend of events leading up to Monday’s caravan include:

• A virtual press conference on Friday, January 15 at 9 am with the Defund Police Coalition.

• Several workshops and trainings, including Know Your Rights trainings for tenants at risk of eviction and a creative writing workshop for Black youth.

• A virtual wailing ceremony by Black women in response to the tragic increase in gun violence on Sunday, January 17 at 1 pm.

MLK’s legacy has been whitewashed for many decades. The truth is he was a radical leader, unshakable in his demands to end capitalism, war, empire, poverty, and white supremacy. We take this opportunity every year to celebrate his true revolutionary spirit.

James Burch, Policy Director of the Anti Police-Terror Project, said, “The work to REfund, REstore, and REimagine our communities is a natural evolution of King’s work, legacy and unfulfilled dream. Dr. King said, ‘A nation that continues year after year to spend more money on military defense than programs of social uplift is approaching spiritual death.’ That describes Oakland’s budget every year, as OPD devours half of our general fund while housing and social services receive next to nothing. As we REimagine what public safety means in Oakland, we are making King’s Dream a reality.”

MLK Day falls right before Inauguration Day and amidst a backdrop of extreme white supremacist mob violence in which law enforcement — including a former Oakland officer — were complicit.

“Police do not prevent or interrupt violence — they respond after the violence happens or commit the violence themselves,” said Cat Brooks, co-founder of the Anti Police-Terror Project and executive director of Justice Teams Network. “We have a dream that one day we will break the cycle of militarized policing and mass incarceration and invest in things that actually keep us safe. We have a dream that we will get to the gun before the bullet flies rather than watch one more mother bury her child. It is time for the city to invest in support services and social programs with the same ferocity it has invested in the failed mechanism of violent policing. We cannot incarcerate our way to wholeness.”

For more information and the current schedule of events, visit: