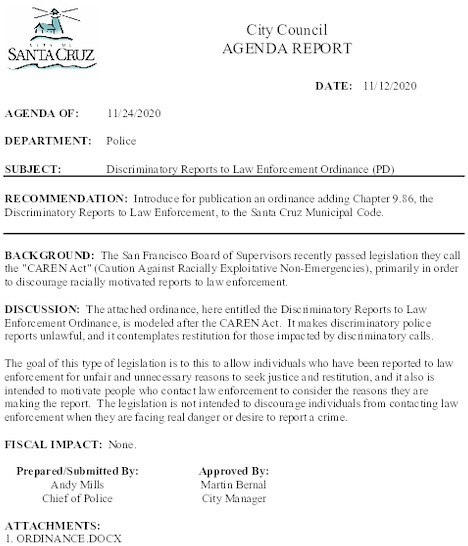 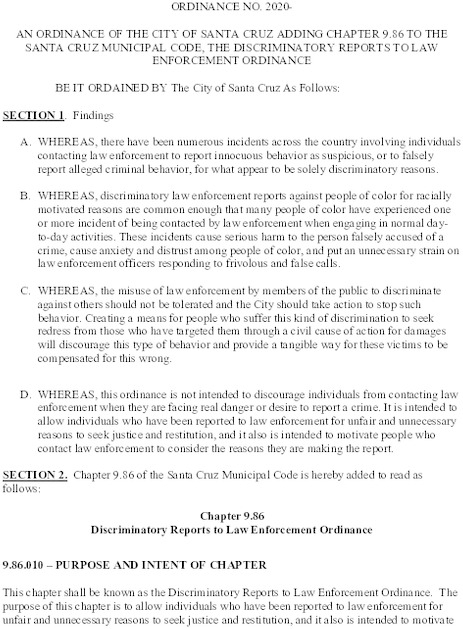 9.86.010 – PURPOSE AND INTENT OF CHAPTER
This chapter shall be known as the Discriminatory Reports to Law Enforcement Ordinance. The purpose of this chapter is to allow individuals who have been reported to law enforcement for unfair and unnecessary reasons to seek justice and restitution, and it also is intended to motivate people who contact law enforcement to consider the reasons they are making the report. This ordinance is not intended to discourage individuals from contacting law enforcement when they are facing real danger or desire to report a crime.

9.86.020 – DISCRIMINATORY REPORTS PROHIBITED
(a) It shall be unlawful to knowingly cause a peace officer to arrive at a location to contact a person, with the specific intent to do any of the following on the basis of the person’s actual or perceived race, color, ancestry, ethnicity, national origin, place of birth, sex, age, religion, creed, disability, sexual orientation, gender identity, weight, or height:
1. Infringe upon the person’s rights under either the California Constitution or the United States Constitution;
2. Discriminate against the person;
3. Cause the person to feel harassed, humiliated, or embarrassed;
4. Cause the person to be expelled from a place in which the person is lawfully located;
5. Damage the person’s reputation or standing within the community; or
6. Damage the person’s financial, economic, consumer, or business prospects or interests.
(b) Any aggrieved person may enforce the provisions of this Section 9.86.020 by means of a civil action.
(c) A person found to have violated subsection (a) in a cause of action under subsection (b) shall be liable to the aggrieved person for special and general damages, but in no case less than $1,000 plus attorneys’ fees and the costs of the action. In addition, punitive damages may be awarded in a proper case.
(d) Nothing in this Section 9.96.020 shall preclude any person from seeking any other remedies, penalties, or procedures provided by law.

9.86.030 INTERPRETATION OF CHAPTER.
(a) If any section or portion of this chapter is found to be invalid by a court of competent jurisdiction, such finding shall not affect the validity of the remainder of the chapter, which shall continue in full force and effect.
(b) Nothing in this ordinance shall be interpreted or applied so as to create any requirement, power, or duty in conflict with any federal or state law.
(c) In enacting and implementing this ordinance, the City is assuming an undertaking only to promote the general welfare. It is not assuming, nor is it imposing on its officers and employees, an obligation for breach of which it is liable in money damages to any person who claims that such breach proximately caused injury.
§Agenda Report: Policy Changes Related to Racial Equity and Social Justice
by Santa Cruz Police News
Saturday Nov 21st, 2020 12:33 PM 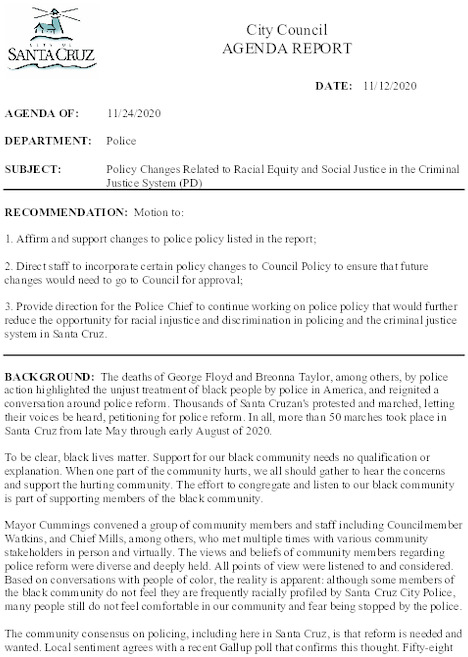 Download PDF (95.2KB)
After collecting information from community members, police officers, and elected representatives, there are 23 changes to policing and police policy that we are requesting to be affirmed, approved, or be considered for further direction for improvement. Council has made some specific changes earlier this year and we are currently asking Council to continue its commitment to making changes to police policy to ensure that all members of our community are provided with safety and treated equally under the law.

A. The following policies have either been in place or have recently been amended by the Police Chief, and we are requesting council affirmation and support:

1. Ban carotid restraint hold: The carotid restraint is a technique used to render a person unconscious. The state Commission approved carotid restraint through the Police Officers Standards and Training (POST) curriculum. The danger of the carotid restraint maneuver slipping into a chokehold is too great of a risk. SCPD banned it on June 3, 2020.
2. Ban "No Knock" warrant service: On August 18, 2020, a directive was distributed to all staff members excluding No Knock search warrants. The caveat is for hostage rescue only. The Chief of Police must approve all No-Knock entries.
3. Limit of dynamic entry on search warrants: The police use dynamic entries to force entry on a building and enter rapidly. Dynamic or explosive entries are inherently risky for the officers and community members. A Deputy Chief of Police must approve a dynamic entry in advance, and only after other options are exhausted. The policy also dictated a uniformed police officer and marked vehicle be present and visible at the service of search warrants to reduce confusion.
4. Require a verbal warning prior to the use of deadly force: "When feasible, the officer shall, before the use of force, make a reasonable effort to identify themselves as a peace officer and to warn that deadly force may be used…"
5. Prohibit shooting at or from moving vehicles: Generally, Santa Cruz police officers are prohibited from shooting at or from moving vehicles. Rarely are they effective, and officers are directed to move out of the path of a vehicle. The only exceptions to this policy are vehicles intended as a weapon of mass destruction (Nice', France), a person in the vehicle is using lethal force against you, or there are no other options to avert serious injury or death - i.e., a vehicle has you pinned against a wall and continues to crush you.
6. Require de-escalation when possible: We require officers to de-escalate volatile situations when feasible. We have equipped every police car with less than lethal weapons, provided enhanced training, and conduct regular tactical debriefs on internal and external incidents. We also reward those who successfully de-escalate potentially deadly incidents.
7. Develop a Use of Force Matrix: SCPD developed a Use of Force Matrix for illustrative purposes. The matrix is approximate and demonstrates for officers a reasonable proportionality when using force. Officers must justify, in writing, all uses of force. Force is not linear, in that an officer must systematically reach a lower level before increasing to the next. Events may evolve rapidly and violently. Officers must respond to that threat. Our goal always is to use the least amount of force possible in every situation.
8. Duty to intercede policy: In the Use of Force policy, officers must intercede if they witness excessive force used. Our mantra is, "If you see it, you own it."
9. Provide independent oversight: OIR Consulting Group's principal partner Michael Gennaco was selected as the City's Independent Police Auditor in a competitive request for proposal process and approved by City Manager Martin Bernal.
10. Provide feedback email address on business cards and citations: Some wish to give the department feedback on the performance of officers, for good or bad behavior. We are putting our contact information within the immediate reach of community members to understand better how we might improve our service level.
11. Provide procedural justice and police legitimacy training: When people understand they are being listened to, heard and treated fairly, and we are transparent in our actions, and impartial in our decision making, it lends toward increased legitimacy. This training is ongoing.
12. Release of officer involved shootings video within 72 hours: When possible, our goal is now to, within 72 hours, release video we have that depicts critical incidents where the use of force by an officer caused death or great bodily injury. Current law, AB 748, gives the police 45 days to release video with possible extensions. SCPD will release the video unless there are extenuating circumstances.
13. Examine and adjust hiring practices that could have excluded candidates based on race, gender, orientation, or economic disparity: SCPD believes it is imperative to recruit, hire, and train capable people from all social sectors. Currently, 58% of our department are members of the LatinX, Asian, Black, or LGBTQ communities. It’s possible that some of our previous interview questions or policies could prevent some from inclusion. For example, previous policy prevented hiring applicants with a tattoo, branding, poor credit, or a history of being charged of certain crimes likely to be implemented with bias. These barriers could have prevented some groups from being a part of the organization.
14. Publish non-confidential records requests to the transparency portal: Greater transparency leads to increased trust. SCPD receives, on average, 54 California Public Records Act (CPRA) requests a month. Many are crime cases that cannot and will not be released. Many others have a broader interest in the public square. Staff members put a great deal of time is put into retrieving CPRA data. If the request has broader utility for the community, it should be posted for all to read.
15. Collect and publish all stop data: In the past, SCPD has published citation data. This direction would publish all police enforcement contacts with the community. This is a California requirement beginning 2022, but the County plan is to have it running in 2021.
16. Develop a positive recruitment video: Develop, write, and film a professionally made recruitment video to attract an individuals sensitive to race, ethnicity, and culture. A theme of the recruitment video should be community policing and racial diversity.
17. Change the standard of when to use lethal force from imminent to immediate: As part of the agreement with the estate of Sean Arlt, Santa Cruz police agreed to change the standard of when lethal force can be used from imminent to an immediate threat. Immediate threat means the person has the present ability, opportunity, and apparent intent to cause death or serious bodily injury immediately. An officer's subjective fear of future harm alone is insufficient.

B. We are requesting that the following be incorporated to Council Policy to ensure that future changes would need to go to Council:
1. Change the standard of substantiating complaints against police personnel from "clear and convincing" to the preponderance of the evidence: Include this new standard in Council Policy to put our standard in line with other city departments, most other law enforcement agencies in the state, and among the best practices. The Independent Police Auditor and the NAACP recommend the evidentiary change.
2. Institute a Council Policy that the Council will approve the acquisition of all military surplus: Council should direct staff to create a Council Policy that requires any department who desires to acquire military surplus, to get Council approval first. This Council Policy would prevent any department from acquiring equipment inconsistent with the elected representatives' norms and values.
3. Publish Public Standard Unit (PSU) findings to the transparency portal: Through a Council Policy, direct the Police Chief to publish Public Standard Unit investigations to the transparency portal. PSU findings are vetted first by the department, Independent Oversight, and then the Public Safety Committee. The City Attorney would overview the privacy of persons reporting complaints and adherence to the Police Officers Bill of Rights. Once reviewed, the results, minus the names, would be posted.

C. We are requesting council direction to work on the following items:
1. The Council could pass a local ordinance, similar to the Caution Against Racially Exploitative Non-Emergencies (CAREN) Act in San Francisco, to discourage people from making discriminatory reports to law enforcement. (See separate agenda item.)
2. Improve diversity training for police and city employees: Several members felt the quality of diversity training is insufficient. SCPD is currently searching for vendors who might provide the best training possible, to be observed by members of our local community to ensure it meets our community's standards.
3. Assist with research into local incarceration rates: Many community members were concerned over a disproportionate representation of people of color in the local jail system. A study should be commissioned to understand the disparity of incarceration rates. The cost is unknown.

FISCAL IMPACT: None.
Add Your Comments
LATEST COMMENTS ABOUT THIS ARTICLE
Listed below are the latest comments about this post.
These comments are submitted anonymously by website visitors.