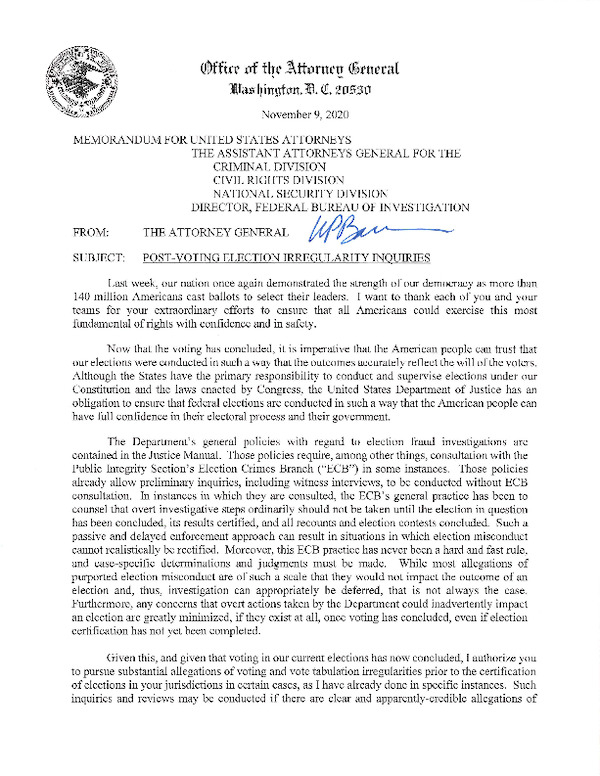 Earlier today, the impeached President Donald J. Trump’s pitbull, Attorney General William Barr, has authorized the Justice Department to open-election fraud investigations based on Trump’s false allegations that the election was stolen from him, and that he won the re-election campaign, not President Elect Joe Biden.

Attorney General William Barr is meddling in the November 3, 2020, election on behalf of Trump. The intent of the investigation is to impact the outcome of the election. To overturn the will of the people who voted Trump out of office. Additionally, for personal reasons Barr’s authorization for the Justice Department to investigate the recent election may result in his saving his own job in the process. Especially if the investigation results in overturning the election that President Elect Joe Biden has clearly won.

It is highly unusual for the Justice Department to investigate a number of recent elections across the nation and to probe unsupported allegations of voting irregularities before the election results have actually been certified by the appropriate persons or agencies. This is the case, with Barr’s meddlesome interference of the election on behalf of his boss, the impeached President Donald J. Trump.

In part, William Barr’s memo states, “The Department's general policies with regard to election fraud investigations are contained in the Justice Manual. Those policies require, among other things, consultation with the Public Integrity Section's Election Crimes Branch ("ECB") in some instances. Those policies already allow preliminary inquiries, including witness interviews, to be conducted without ECB consultation. In instances in which they are consulted, the ECB' s general practice has been to counsel that overt investigative steps ordinarily should not be taken until the election in question has been concluded, its results certified, and all recounts and election contests concluded. Such a passive and delayed enforcement approach can result in situations in which election misconduct cannot realistically be rectified. Moreover, this ECB practice has never been a hard and fast rule, and case-specific determinations and judgments must be made. While most allegations of purported election misconduct are of such a scale that they would not impact the outcome of an election and, thus, investigation can appropriately be deferred, that is not always the case. Furthermore, any concerns that overt actions taken by the Department could inadvertently impact an election are greatly minimized, if they exist at all, once voting has concluded, even if election certification has not yet been completed.”

Barr’s attempt to meddle in the recent election’s across the nation is so outrageous that reportedly in protest, Richard Pilger, the Justice Department's top election crimes prosecutor resigned his position today, and refuses to have any part of the sham investigations intended to interfere, and overturn the will of the people who voted the impeached President Donald J. Trump out of office.

Reportedly, according to CNN, “Richard Pilger, director of the elections crimes branch in the Justice Department's Public Integrity Section, told colleagues in an email that the attorney general was issuing "an important new policy abrogating the forty-year-old Non-Interference Policy for ballot fraud investigations in the period prior to elections becoming certified and uncontested." Pilger also forwarded the memo to colleagues in his resignation letter.”

Additionally, the Trump regime is trying to sabotage the Biden-Harris transition team, in addition to refusing to commit to a peaceful transfer of power while refusing to admit that President Elect Joe Biden won the election with .