Protestors rallied today in Sacramento as Donald Trump met with Gavin Newsom in McClellan Park (formerly the McClellan Air Force Base). Throughout the demonstration, "Trumpers" drove aggressively at protestors. Witnesses say there were five incidents in four hours.

People gathered at the intersection of Airbase Drive and Watt Avenue. They held signs, chanted and blocked traffic in one direction as California Highway Patrol officers monitored the demonstration. Suddenly and unprovoked, at about 1:00pm, a CHP officer began driving through a line of protestors that were chanting "You can't stop the revolution!" As one person crawled onto the car's hood, the CHP officer hit the gas and sped away. The demonstrator fell to the ground and sustained injuries.

At around 1:30pm, an ambulance arrived on scene and took the demonstrator away. At this time, there have not been any updates on this person's status.
§Longer Video
by Shut Down Trump
Monday Sep 14th, 2020 3:41 PM
Copy the code below to embed this movie into a web page:
Download Video (98.4MB) | Embed Video
24:10 minute video.

This longer video shows more of the protest against Donald Trump on September 14, 2020. 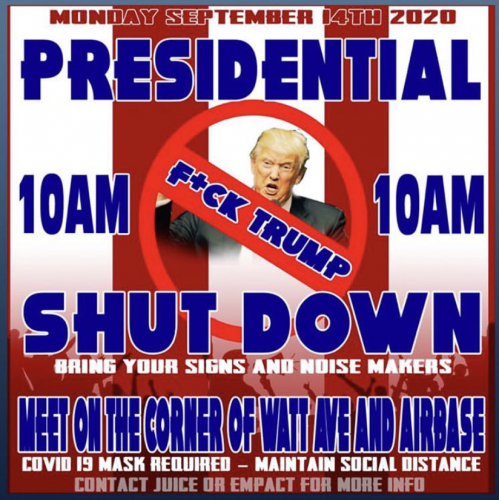 original image (824x824)
A flyer for the demonstration.
Add a Comment
§Cal Democratic Party Should Never Have Invited Trump to Cal
by Read the 2016 Election Results
Monday Sep 14th, 2020 4:24 PM
The California Democratic Party had no business inviting Republican Trump to California as they knew that anger in this overwhelmingly Democratic state against Nazi Trump is now boiling over. They also knew, as we have seen all across the nation including right here on the Golden Gate Bridge, the California Highway Patrol and all other police are usually pro-Trump. Looking at the California election results of 2016 at the Secretary of State's website at https://www.sos.ca.gov/elections/prior-elections/statewide-election-results/general-election-november-8-2016/statement-vote or https://elections.cdn.sos.ca.gov/sov/2016-general/sov/17-presidential-formatted.pdf, we can see that California voted only 31% for Trump and in Sacramento County, Trump's vote was only 33%. In San Francisco, only 85 miles from Sacramento, the vote for Trump was 9%; Alameda County (Berkeley-Oakland), it was 14%, Marin County (north side of Golden Gate Bridge), 15% and similar low figures for Republican Trump in the Bay Area. This was a provocation by the Democratic Party as they knew Nazi Trump was coming to a state that has absolutely no Electoral College votes for him or any Republican since 1992.

Trump could receive all the information on the fires via phone, Email and/or Skype or Zoom, complete with the crackling sound of the trees being burned in pictures of past and current fires and the exact figure of the pollution caused by the massive amounts of smoke in every County from https://www.sparetheair.org/ and http://www.sparetheair.com/aqi.cfm ever since these fires started in the middle of August 2020. 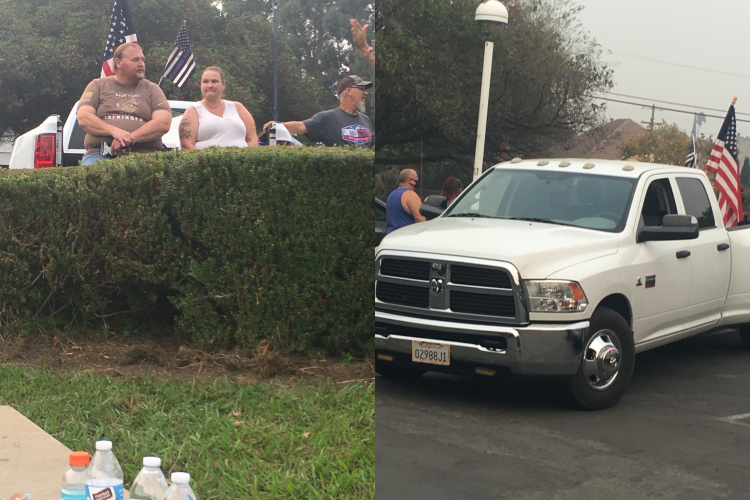 original image (1500x1000)
There were at least five different incidents where vehicles driven by Trump supporters and a CHP cop plowed into protesters today in Sacramento causing several injuries.

https://twitter.com/heresysquad/status/1305721050668302337
Add a Comment
Support Independent Media
We are 100% volunteer and depend on your participation to sustain our efforts!