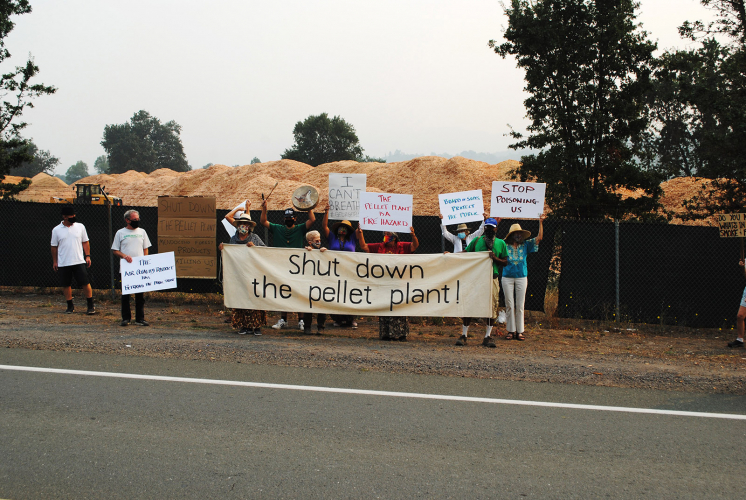 original image (1600x1071)
On August 28, tribal members and local residents protested outside the Mendocino Forest Products (MFP) wood pellet plant in Calpella, near Ukiah, calling for suspension of the plant’s operations during the Covid pandemic, now compounded by recent fires and extremely poor air quality. Organizers say the protest is needed to bring attention to demands for public transparency on air pollution and fire safety issues presented by the plant’s operations to date and especially under present conditions.

Following a Prayer to the Seven Directions, demonstrators walked a short distance from the post office to MFP’s distribution center and wood pellet plant. They carried a white banner with a statement in black declaring, “shut down the pellet plant!” Other folks held signs with messages such as, “We Demand Clean Air,” “The Pellet Plant is a Fire Hazard,” “Our Children Can’t Breath,” and “The Air Quality District Has Betrayed The Public Trust.”

Recent Harvard studies have shown a strong correlation between high levels of particulate matter and toxic substances in the air, and dramatically higher rates of Covid infection. Those most affected are Native Americans, essential workers living in low income communities, the elderly and those with disabilities and breathing difficulties such as asthma and COPD (Chronic obstructive pulmonary disease).

Coyote Valley tribal elder Priscilla Hunter waited 7 ½ months for a response from county counsel to her request for information under the CA Public Records Act on the pollution history of the plant. When the Air Quality Management District (AQMD) finally responded, all the readings from the pollution monitoring gauges in the factory furnaces were redacted. Data on the plant’s history of permit violations have still not been provided. In June, the State Air Quality Control Board issued a Complaint against the local AQMD for its opacity and slow response.

For over 2 and ½ years after opening the Calpella plant in August 2017, Mendocino Forest Product (MFP) was unable to pass source tests for permissible levels of pollution, finally passing a source test in November of 2019. However, AQMD only requires the company’s emissions be tested annually. Given the plant’s past pollution history, protestors say this is unacceptable and demand more monitoring.

On August 16, a fire ignited in the plant yard which engulfed heavy machinery (front loader) and wood chips, in close proximity to huge piles of sawdust and bags of wood pellets. According to the AQMD this is the second fire at the plant. The Redwood Valley area has been hit by two recent fires and residents say they cannot ignore the increased risk to fire safety posed by the hot furnaces at the wood pellet plant and the well documented danger of self-combustion in the large sawdust piles heaped up in the plant’s yard.

Two plumes of smoke are visible daily from the plant: a white one that appears to be steam and a grey one. Coyote Valley resident and SEIJ (Social Environmental Indigenous Justice, pronounced Sage) member, Polly Girvin, who has been documenting the plumes, says she believes the grey smoke is attributable to a wood burning power generator and that this smokestack is the most likely to release harmful particulate matter. “It is not just steam, as the company CEO has said. There are ongoing daily dark grey smoke emissions as well” said Girvin.

A Waldorf School, located right across the road from the pellet plant, is holding classes outside due the Corona pandemic and is getting toxic drift from the diesel trucks bringing mountains of sawdust in and taking loads of pellets out. Many in this predominantly Hispanic neighborhood that includes a Tribal Health Center and nearby Coyote Valley Reservation wonder how, why and when their school or home ended up in an industrial zone and whether it should be zoned industrial at all. No public notice was given before the permit was issued.

During this week’s fire in Calpella the plant continued operating for hours. “I just cannot believe that an Air Quality Management District allows the plant to get away with the belching of so much grey smoke from its wood burning furnace merely a day after the local fire a few blocks away from the plant and when air quality is so poor. Please close the plant down during this time of very poor air quality, fire season and a pandemic. We do not need the company’s grey smokestack emissions further polluting the air at this time”, Girvin urged.
§Fire at Calpella Wood Pellet Plant on August 16, 2020
by Bradley Allen
Friday Aug 28th, 2020 6:29 PM 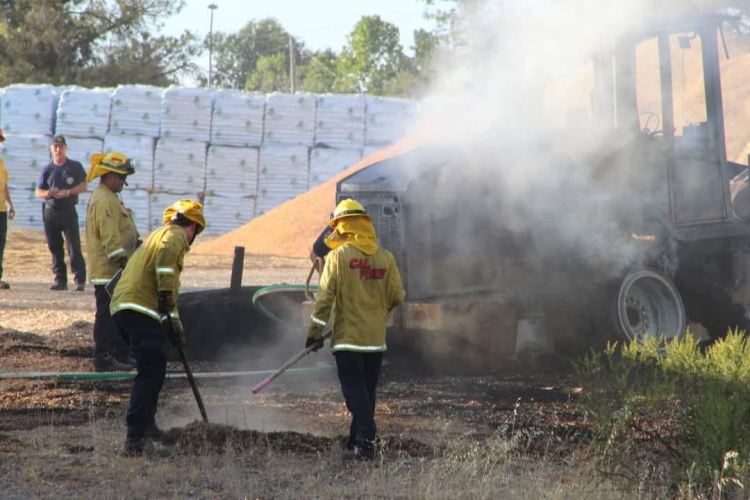 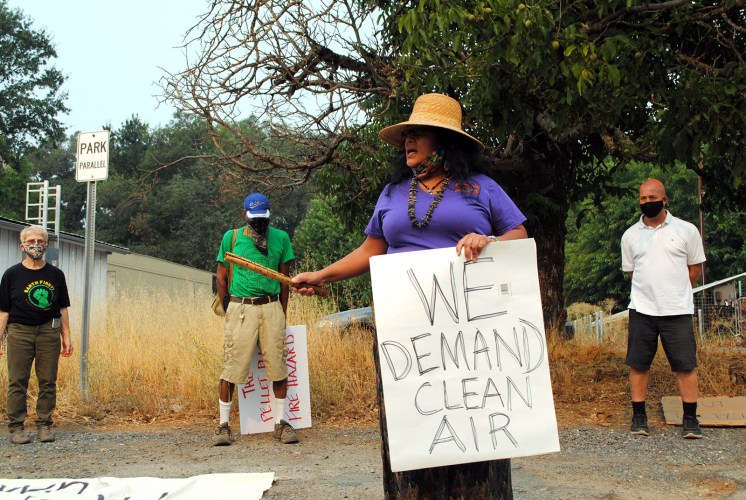 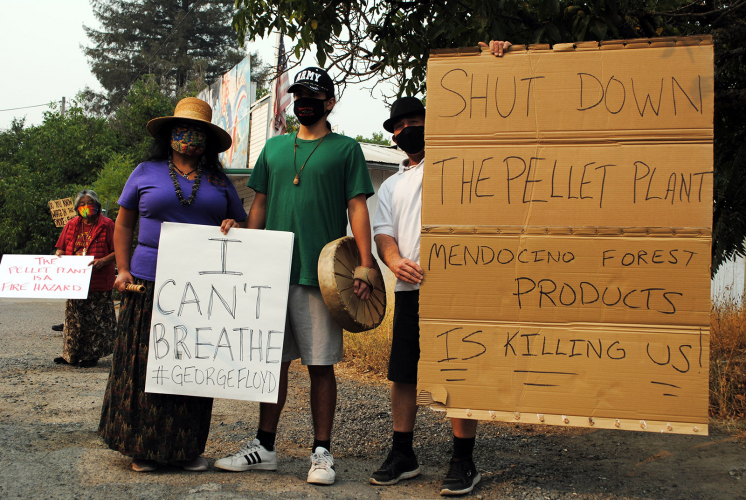 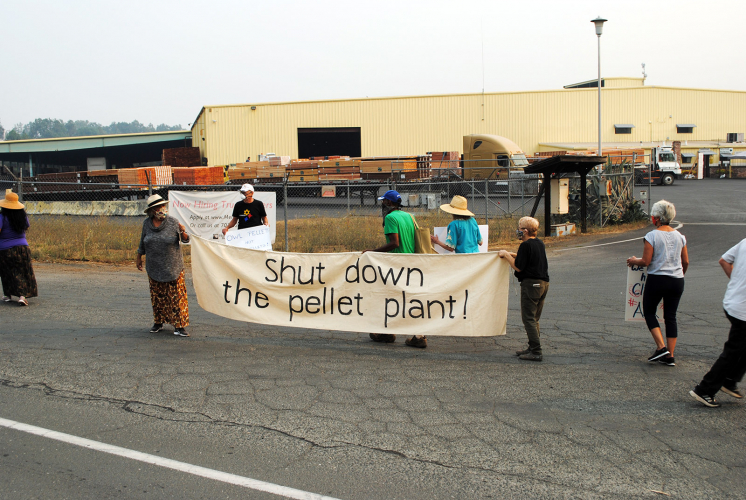 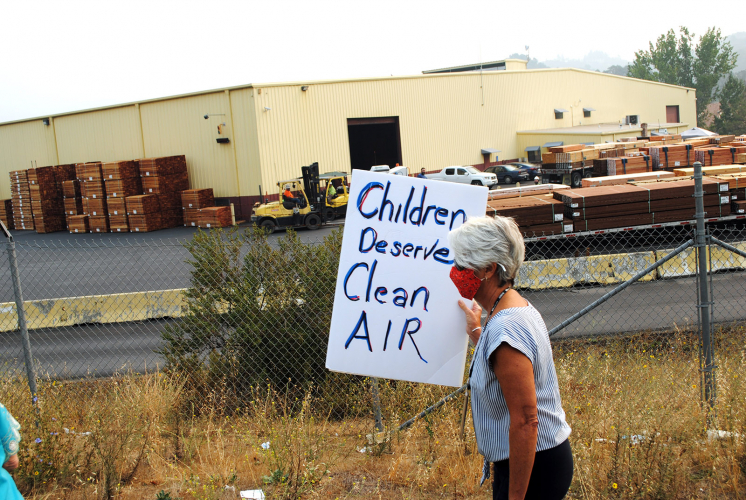 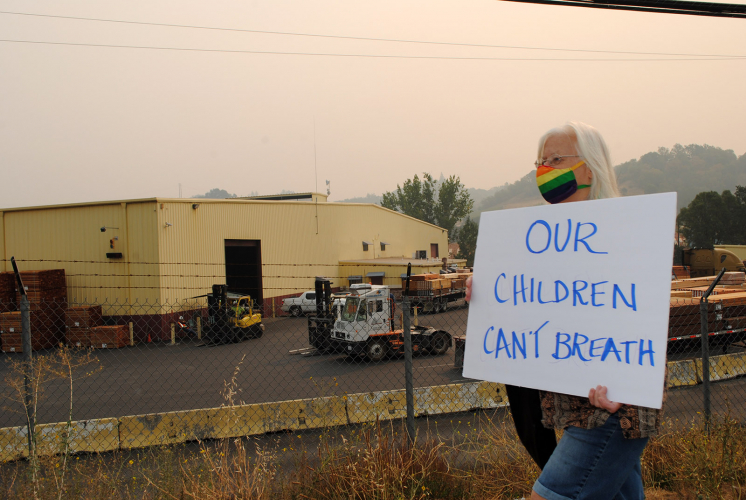 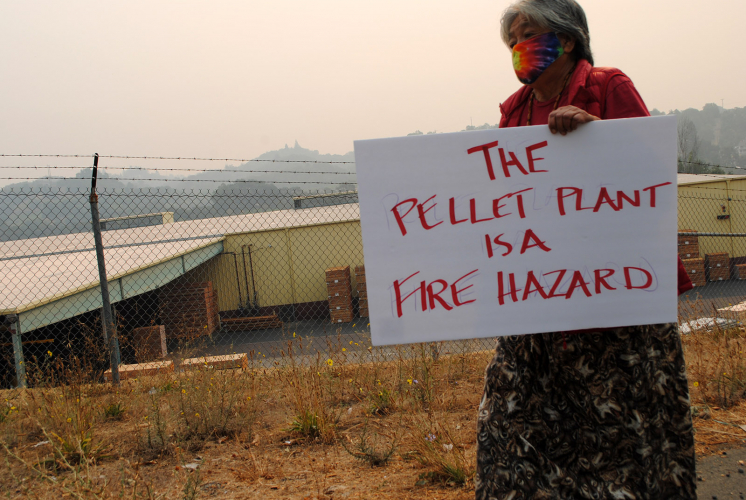 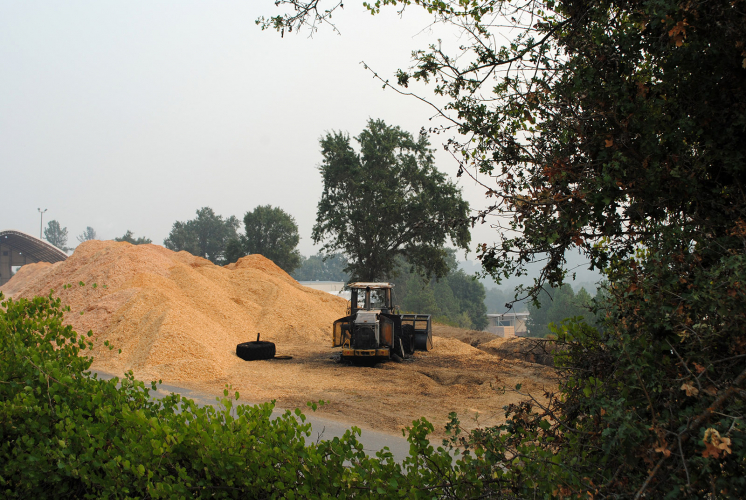 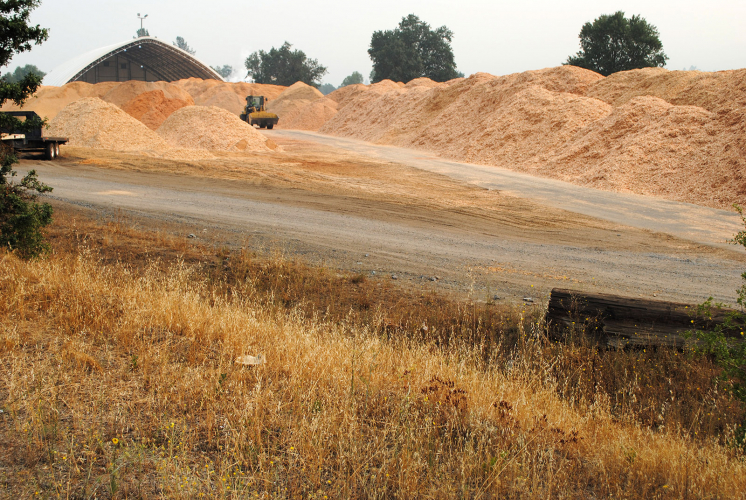 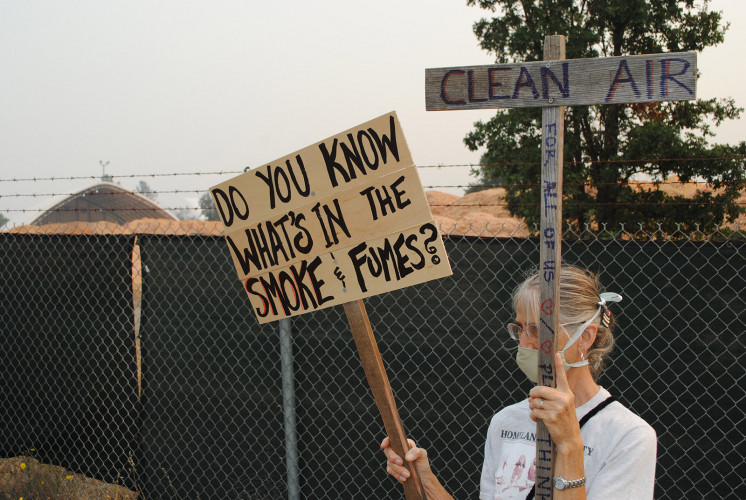 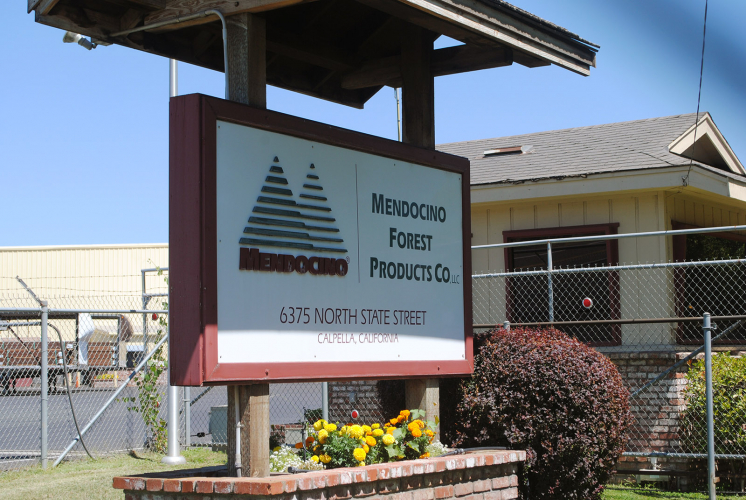 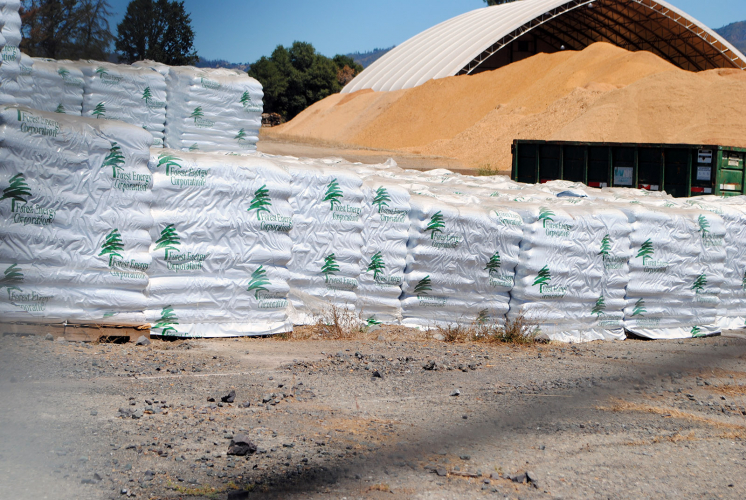 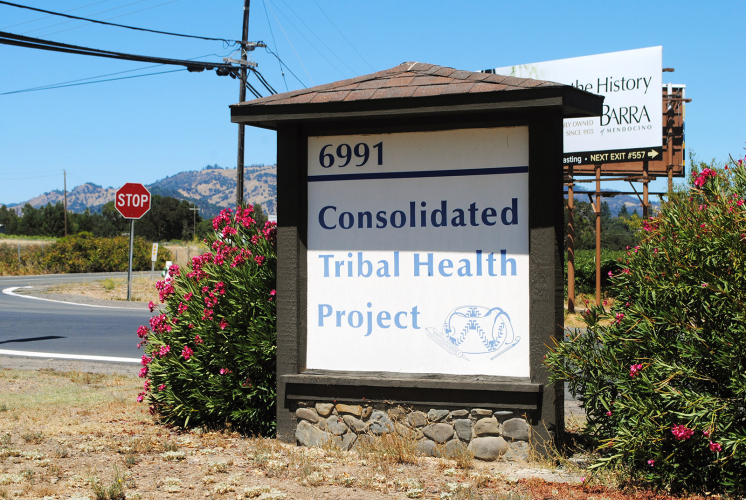 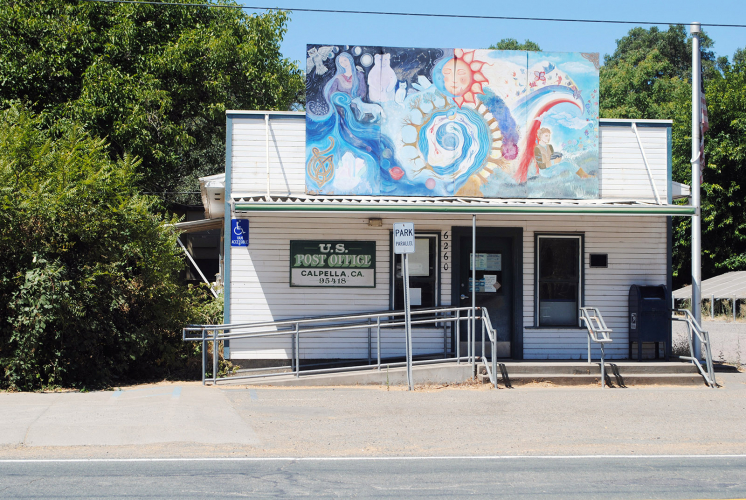 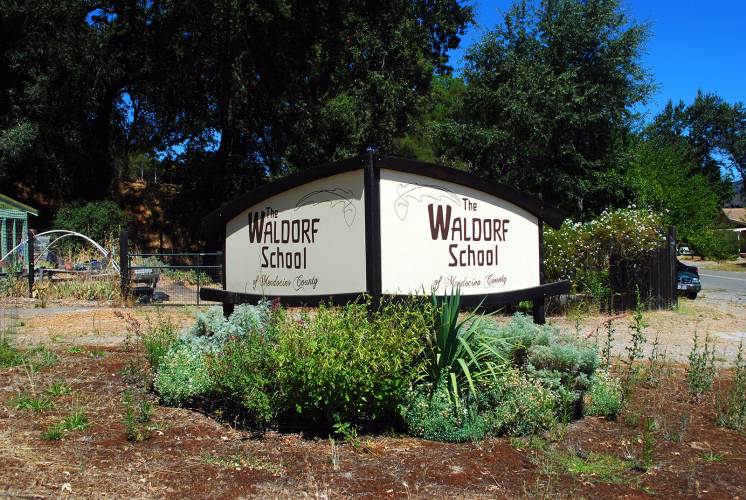 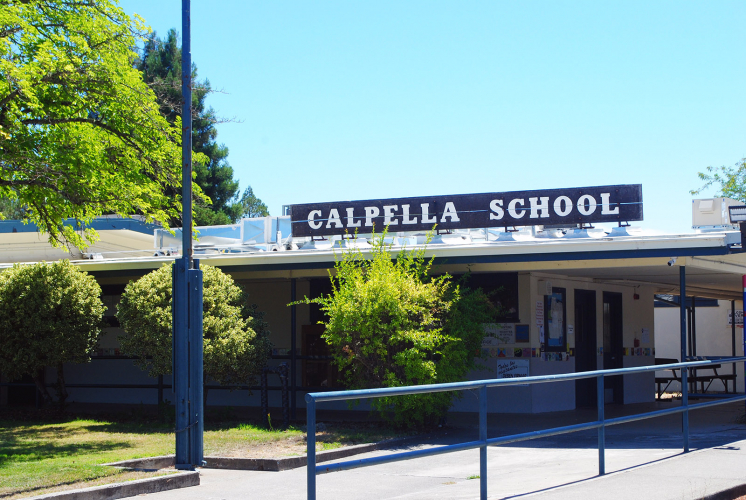 original image (1600x1071)
August 13, 2020
Add Your Comments
Support Independent Media
We are 100% volunteer and depend on your participation to sustain our efforts!