by Hotels Not Graves
Who Created A Successful Covid19 Hotel Pilot Program for Unhoused Residents in Oakland? Unhoused Leaders & Grassroots Advocates Did

original image (1600x705)
OAKLAND CA — Since April 24, 2020, three grassroots homeless advocacy groups have been raising money to move unsheltered Oakland residents into hotels, in an attempt to prevent the spread of COVID-19. Through crowdfunding and social media, the volunteer-run effort has raised nearly $123,000 in donations, and has housed 43 unsheltered Oakland residents in total across two hotels. The program currently has a waiting list of unhoused residents interested in moving in.

Fill Hotels not Graves is the innovative collaboration of The East Oakland Collective, Love and Justice in the Streets, and The Village in Oakland. Relying on a GoFundMe campaign, and without support from any government agencies or figures, they have sheltered vulnerable folks, prioritizing elders, the immunocompromised, and families with infants and small children. The goal is to give unhoused Oaklanders a site to Shelter In Place before they contract the deadly virus.

“We currently have 33 residents, ages 1 month to 78 years old, safely Sheltering in Place through this program,” said Needa Bee, founder of The Village and site coordinator for one of the hotels. “We have been able to get our folks with dire medical conditions stabilized. We have been able to get folks much needed medical care, support with paperwork, connections to counselors. Most importantly we have been able to provide a place where folks can get a peace of mind, ability to protect themselves from Covid19, and hope for the future.”

The organizers believe their efforts have not just proven successful, but are demonstrating that mutual aid and grassroots solutions are more effective than state programs. Hotels Not Graves debunks the ungrounded belief that only “professionals” can effectively do this work. The program is run by, and was created by, two unhoused Black and Brown woman leaders of The Village, who are sheltered through the program.

“We both have lived experiences of being unhoused ourselves. And we are professionals. I am a licensed EMT, Needa has been working with homeless Oaklanders for two decades. We are able to do what the government and non-profit homeless industrial complex cannot accomplish. Our lived experience makes all the difference,” said Aiyannah Johnson, an essential worker with The Village, and site manager for one of the hotels. “The City of Oakland is doing nothing to help unhoused folks shelter in place. And Alameda County and the state’s hotel program is primarily for people who have COVID19 or have been exposed. It’s not about prevention.”

Homeless advocates have criticized Project Roomkey and other initial government programs designed to provide shelter to unhoused folks for their high barriers to entry. According to recent reports from CBS San Francisco and Salon, hotel rooms leased for unhoused people have sat empty for the duration of shelter in place.

Last week, Alameda County began soliciting non-profits to expand their Safer Ground Covid19 hotel program. Under this new program, the County will pay for 150 hotel rooms for unhoused residents who are vulnerable to being infected with the virus. Partner organizations are tasked with replicating infrastructure and programming Hotels Not Graves has implemented. These organizations will also enforce County rules, which have been criticized repeatedly by advocates for high barriers to entry, preventing unsheltered folks from utilizing the existing hotel program.

“We have said repeatedly that waiting for our people to get sick to shelter them makes no sense. We are happy that the government is finally listening to us,” Bee said. “Coming up with effective, humane solutions is something we are good at.”

Hotels Not Graves hopes to raise more money to move in more residents and intends to keep all residents in the hotels until they can properly exit into a stable situation. “We can’t let folks go back to tents or their passenger vehicles. All the healing and stability folks have been able to achieve will go right out into the streets,” said Candice Elder, Founder and Executive Director of The East Oakland Collective. “We are open to working with The County as partners on their new hotel voucher program, but not if we have to enforce barriers, treatment and conditions that harm not help our brothers and sisters.”

The Hotels Not Graves effort is the local manifestation of the #NoVacancyCA campaign. This statewide campaign is organized by unhoused leaders and homeless advocates, mobilizing to demand that mayors across California commandeer the thousands of empty hotels during the pandemic for the immediate shelter of unhoused folks.

The Village is a grassroots movement of housed and unhoused volunteers advocating for the rights of our unhoused community members and build autonomous solutions to this crisis. The East Oakland Collective is a grassroots organization dedicated to racial and economic equity in Deep East Oakland. Love & Justice in the Streets is a grassroots group that provides support and advocacy to Oakland’s unhoused. The #NoVacancyCA campaign is a statewide campaign of unhoused leaders and homeless advocates mobilizing to demand mayors across California commandeer the hundreds of thousands of empty hotels during the pandemic to allow unhoused folks to shelter-in-place properly.
END_OF_DOCUMENT_TOKEN_TO_BE_REPLACED
§Patricia and daughter
by Hotels Not Graves 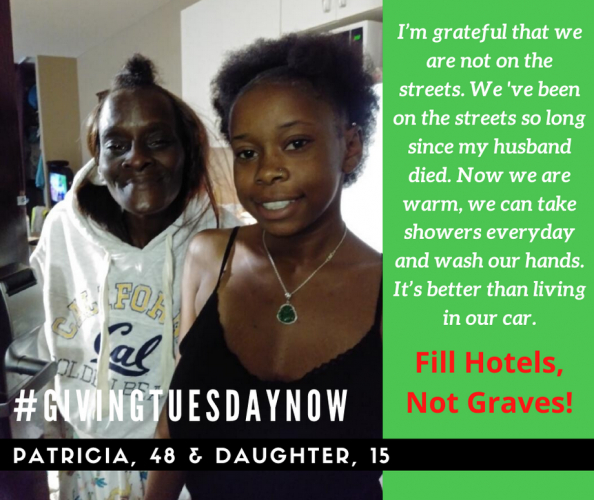 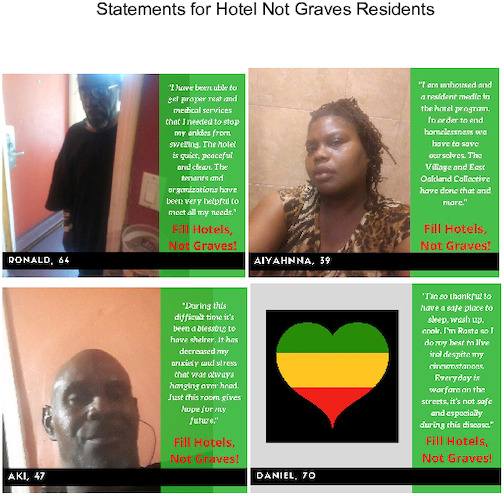 Download PDF (922.4KB)
END_OF_DOCUMENT_TOKEN_TO_BE_REPLACED
Add Your Comments
Support Independent Media
We are 100% volunteer and depend on your participation to sustain our efforts!