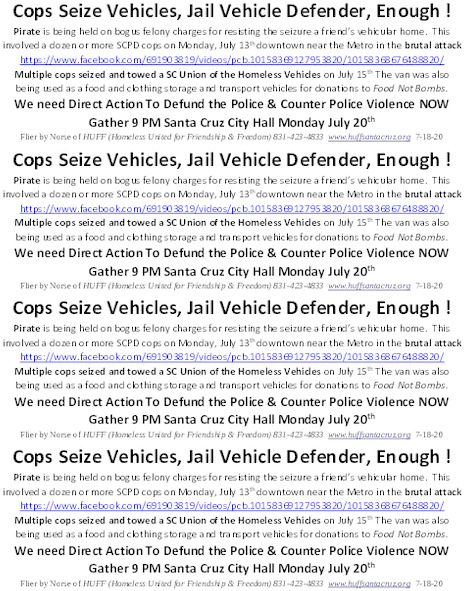 Download PDF (553.6KB)
I'm told Marty faces at least four felonies for objecting strenuously to the police theft of his friend's car. Police have apparently stepped up their attacks on some vehicular homes, ignoring the COVID-19 CDC guidelines for shelter-in-place "leave those outside alone".

SCPD homesnatchers took the Santa Cruz Homeless Union clothes-and-food storage vehicle and had it towed away from the Food Not Bombs meal on Wednesday. Police accepted no responsibility for finding the displaced man living within an alternate place.

On the positive side, it only took six of them and three police vehicles, as distinguished from the 10-15 cops who appeared on the scene last week near the Metro to drag away Marty and the vehicle he was defending.

There has been no local accounting of state and federal funds (under Project Roomkey) with motel rooms left vacant. Meanwhile vulnerable homeless folks continue to struggle outside or risk infection in the ill-advised group shelters (Veteran's Hall, Armory, Laurel St., Housing Matters).

Tonight's event will reportedly address the issue of over-militarized and misdirected SCPD resources through peaceful Direct Action since authorities have yet to respond to reasoned discourse.

The Speak-Out (or Shriek-Out) outside the residences of Councilmember Mathews and Police Chief Mills went on for a total of several hours with little sight of the SCPD. They kept at least a one block distance from the 50-75 demonstrators. Mills and Mathews never appeared to answer the angry questions of the crowd.

At the last three Council meetings, calls for defunding the police were almost completely ignored, though the public calls for action and specific demands took up the majority of the Oral Communications or Public Comment time. There is no Council meeting scheduled until the 2nd Tuesday in August.

The focus of the protest was the brutal overkill of the arrest of Pirate (Marty Mirabel) Monday before last, who was copnapped and held on high bail, finally reduced to $25,000 for the crime of resisting the dangerous seizure of another homeless man's car/lodging. Pirate faces a Preliminary Hearing on cooked-up felonies 11 AM Monday July 27th.

Fascist overkill tactics by police and courts aren't unique to Trump's DHS or Portland's police but are on display here as the COVID-19 hits the Watsonville group homeless shelter while authorities refuse to provide protective motel rooms.

I'll be posting audio of the protest speakers, including a visiting relative of Stephon Clark from Sacramento, on Thursday evening (7-23) during my evening Free Radio Santa Cruz netcast at 6 PM.

The show will be archived at http://www.huffsantacruz.org/Lostshows.html .

Another "comfort the disturbed; disturb the comfortable" protest is planned for 7 PM Wednesday July 22nd at the Wharf round-about. See "Defund the Santa Cruz Police - End the Seizure of Vehicular Homes " at https://www.indybay.org/newsitems/2020/07/21/18835215.php
http://www.huffsantacruz.org
Add Your Comments
LATEST COMMENTS ABOUT THIS ARTICLE
Listed below are the latest comments about this post.
These comments are submitted anonymously by website visitors.