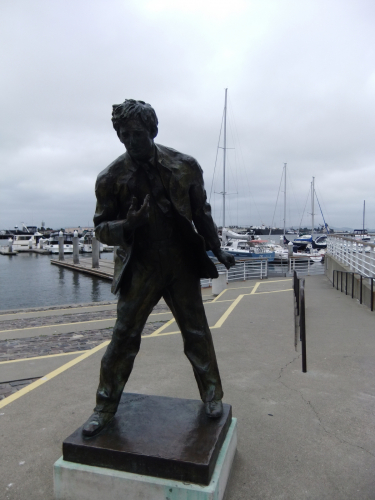 Oakland - During 1996, a monument in Oakland to the famed writer Jack London was created by Cedric Wentworth, and it helps to bring in many tourists to the tourist trap known as Jack London Square.

However, it was also during that same year in 1996, that a feud erupted in the City of Whitehorse, Yukon, Canada, when the Whitehorse City Council wanted to change the name of a road called Two Mile Hill into Jack London Boulevard. The City Council ran into fierce resistance by Joe Jack, chief of the Kwanlin Dun First Nation, and its 1,300 members at the time who opposed the road name change because of the racist activities of Jack London.

The story about Joe Jack, chief of the Kwanlin Dun First Nation, and the victory of its 1,300 members to oppose the proposed road name change in Whitehorse made headlines around the world, including in the City of Oakland.

According to a November 20, 1996, article in the San Francisco Chronicle East Bay Bureau, in part it read, “Indigenous residents of a small Yukon Territory town have blocked the naming of a street after Jack London because they say he was a racist who was vehement in his belief that "black and brown" people were inferior.

The controversy comes as London scholars and other lovers of his work prepare to mark the 80th anniversary of his death on Nov. 22, 1916. The Bay Area native's classic adventure stories about the Klondike, inspired by the year he spent gold mining in the frigid region, made him a celebrity throughout the Yukon settlements.

The road-naming battle in the town of Whitehorse, however, unleashed old animosities between the natives and settlers, who streamed into the area searching for gold during the latter part of the 19th century.

The decision by the Whitehorse City Council to drop the issue of turning Two Mile Hill into Jack London Boulevard was considered a victory by the 1,300 member Kwanlin Dun First Nation, but the issues raised during the controversy have yet to die out.”

That’s right. It was well known that Jack London was a very controversial figure during the time in 1996 that the monument to Jack London was created for Jack London Square, and city officials knew it. Especially after November 20, 1996, when the feud in Whitehorse was reported on by the Chronicle and other newspapers around the world.

The Chronicle newspaper with the story about the feud over Jack London in Whitehorse landed at the homes of thousands of people in Oakland, including city officials.

London reportedly was also known for ranting and raving against the so-called “Yellow Peril.”

Additionally, it has been reported that Jack London openly spoke out against black and brown people, and was a strong believer in eugenics. Reportedly, London wrote to Frederick H. Robinson of the periodical Medical Review of Reviews, stating, "I believe the future belongs to eugenics, and will be determined by the practice of eugenics."

Jack London Square is Oakland’s tourist trap, and is owned by the Port of Oakland.

In addition to the controversial tourist trap called Jack London Square, Oakland has many streets named after slaveholders, and supporters of slavery.