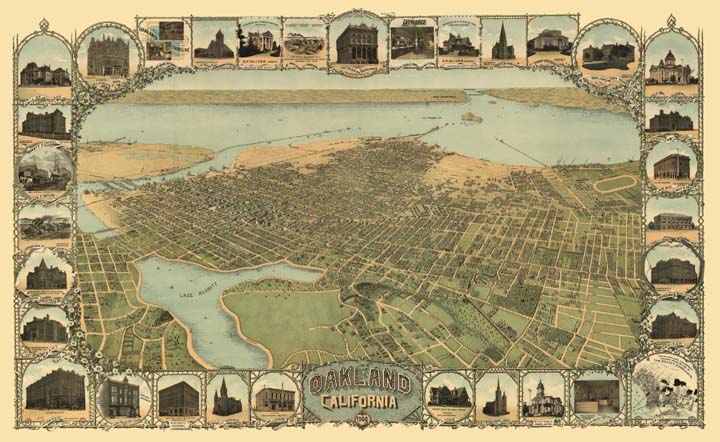 Oakland streets named after slave owners and supporters of slavery

Oakland - As thousands of Black Lives Matter protesters have been protesting downtown Oakland recently, often they are traveling on, or are crossing numerous streets that have been named after some historical notorious slave owners from the past.

Just try to imagine this tyrannical figure from the trash bins of history who owned 200 slaves or more. Reportedly, Jackson used to have Native Americans skinned so he could use their flesh as bridle reigns for horses.

Jackson is the impeached President Donald J. Trump’s favorite former white supremacist president, and recently protesters in Washington D.C., have been battling with the cops while trying to tear down the statue of Andrew Jackson in Lafayette Park, near the White House. The same White House that was built with slave labor, and used slave labor as servants in the White House years ago.

More Streets Named After Slave Owners Or Supporters Of Slavery:

Washington St., located downtown Oakland near the courthouse, was named after George Washington, another notorious slave owner who reportedly owned around 317 slaves, or more. At the least, Washington was known to buy and sell slaves, and reportedly he would even use young slaves (children) as prizes in a lottery.

There is Franklin St., named after former President Benjamin Franklin, who reportedly owned slaves, and would offer slaves for sale in advertisements in a newspaper that he owned.

And what about Jefferson St., named after former President Thomas Jefferson, who reportedly owned over 600 slaves in his lifetime?

During times like these as people across the nation are tearing down statues of glorified slave owners and statues of some notorious pricks who are known for killing off and enslaving the Native Americans, one can only wonder why Oakland has so many streets named after so many notorious slave owners.

Webster St., was named after Senator Daniel Webster, who reportedly was known for attacking so-called radical abolitionists. He is also known for stating that fugitive slaves should be returned to their owners, and that people in the north should respect slavery in the southern states.

Another road in Oakland named after a historical notorious slave owner includes Taylor Ave., named after President Zachary Taylor, the owner of 145 slaves, or more.

Madison St., is named after President James Madison, another slave holder who owned 118 slaves, or more.

Van Buren St., is named after President Martin Van Buren, a slave owner, and former Vice President to Andrew Jackson. In his March 4, 1837, inaugural address, Van Buren said, "I must go into the Presidential chair the inflexible and uncompromising opponent of every attempt on the part of Congress to abolish slavery in the District of Columbia against the wishes of the slaveholding States, and also with a determination equally decided to resist the slightest interference with it in the States where it exists."

Clay St., located downtown near the Federal Building is named after a slave owner named Henry Clay, who lost his bid to become president of the United States in a failed campaign.

Adams St., is named after President John Quincy Adams. Reportedly, as a U.S. Senator, Adams assisted slaveholders to recover fugitive slaves, and he fought to oppose any efforts to bar slavery or the importation of slaves into the the Louisiana Territory.

Furthermore, Pierce St., is named after President Franklin Pierce. In regards to his beliefs about slavery, during his inaugural address in 1853, Pierce stated, “I believe that involuntary servitude, as it exists in different States of this Confederacy, is recognized by the Constitution. I believe that it stands like any other admitted right, and that the States where it exists are entitled to efficient remedies to enforce the constitutional provisions. I hold that the laws of 1850, commonly called the "compromise measures," are strictly constitutional and to be unhesitatingly carried into effect. I believe that the constituted authorities of this Republic are bound to regard the rights of the South in this respect as they would view any other legal and constitutional right, and that the laws to enforce them should be respected and obeyed, not with a reluctance encouraged by abstract opinions as to their propriety in a different state of society, but cheerfully and according to the decisions of the tribunal to which their exposition belongs.”

The above mentioned streets of Oakland are a stark reminder of the notorious slaveholders and supporters of slavery that are still being glorified by city officials, and the mayor, in a time when Black Lives Matter.

Some people may wonder if the stench of a sulphurous contract with the devil can still be detected in City Hall, after someone decided years ago to name some of the streets in Oakland after the notorious slaveholders, who are still being glorified by city officials at this very moment.

Some people believe that the brutal Boogaloo Boys (movement), and the violent Atomwaffen Division got its start with the fascist neo-Nazi group called Iron March, in their secretive online chats.

Pro-Publica was threatened by some members of Atomwaffen for exposing some of its membership, and leaders.

Hopefully, the Boogaloo Boys (movement) will not try to frame the Black Lives Matter movement in Oakland again, and perhaps the time is ripe for the City Council to rename the streets that glorify the slaveholders, and those who supported slavery.