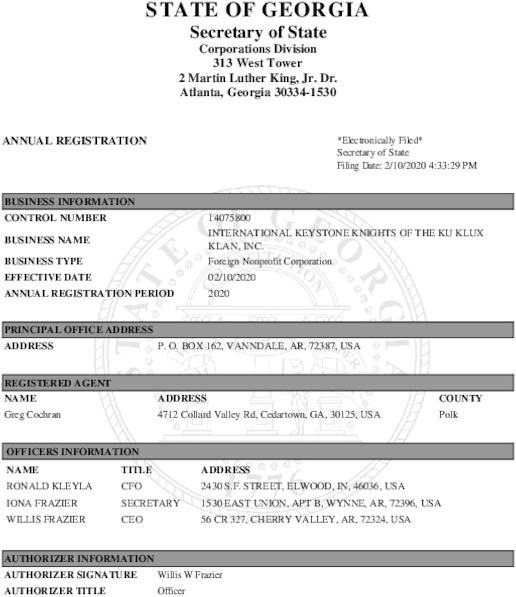 In response to the murder of George Floyd by murderous cops in Minneapolis, and the constant threat of white supremacists, neo-Nazis and the Ku Klux Klan, a 15-year old girl came up with a petition that people can sign in an effort to make the Ku Klux Klan illegal. It has been signed by nearly 2 million people.

The petition states, “Sign this petition to make the KKK illegal. The Ku Klux Klan is a white supremacist hate group with historic background of terrorism, including countless physical assaults and murders. The KKK is still active in certain parts of the country and has public rallies. Hate should not be a way to bring communities together, nor should it be allowed or tolerated.”

Jordan Crisp signed the petition yesterday, and as a reason for signing the petition he wrote, “The KKK is applicable to nothing but terrorism. In order for there to be peace, MURDEROUS GROUPS must be stopped.”

Feel free to click here if you are interested in signing the petition against the Ku Klux Klan.

Reportedly, it was back in June of 1964 in Mississippi that James Chaney, Andrew Goodman, and Michael Schwerner were abducted and murdered by members of the Klan during the civil rights movement while working with the Freedom Summer campaign.


The tentacles of the KKK and their members have stretched through time to affect us in ways that we may not even be aware of.

As an example, Truman Ave., in Oakland, California, was named after President Harry S.Truman, a short time member of the KKK before he became president. Reportedly, Truman wanted the votes of the KKK for a judgeship before he became president. This is the same fellow who had some atomic weapons dropped on Japan at the tail end of World War ll, and many critics still claim that it was not necessary for him to do so.

Reportedly, the Ku Klux Klan used to be very active in Oakland.

And years ago in nearby Piedmont according to Wikipedia, Burton F. Becker was a Republican who used to be the Police Chief of Piedmont, and a member of the KKK. Becker was elected as Sheriff of the Alameda County Sheriff’s Office, and landed in San Quentin Prison for a number of illegal activities.

During August of 2017, David Duke, a former Grand Wizard of the Knights of the Ku Klux Klan, praised the impeached President Donald J. Trump for supporting the fascists, neo-Nazis, KKK and the white supremacists who brought blood and violence to the streets of Charlottesville that month.

In a press conference, in response to what happened the day Heather Heyer died at the protest in Charlottesville where David Duke was to be a guest speaker for the neo-Nazis and white supremacists, Trump said, “you also had people that were very fine people, on both sides.” Heather Heyer died and 19 others were injured by the driver of a car after being run over by a white supremacist.

The story went viral and resulted in the boycott and closure of the O’mei restaurant in Santa Cruz, owned by Roger Grigsby at the time.

Then shortly after, I wrote a follow up article exposing some more campaign contributors to David Duke in Minneapolis and beyond, that also went viral.

The story resulted in the boycott and closure of a nightclub called Clubhouse Jager in Minneapolis, owned by Julius DeRoma.


The recent legal document at the top of the page from Georgia, for the International Keystone Knights of the Ku Klux Klan (IKKKKK), an active Klan, reveals that Ronald Kleyla is the Chief Financial Officer for the IKKKKK, and that he resides in Elwood, Indiana.

A Best Places review of Elwood, Indiana, posted by someone in 2019, mentioned that the Klan is very active in that city, and that the police have been involved in passing out KKK flyers there.

There are many factions of the terrorist KKK - Klans that have been feuding with one another through the years for leadership all across the nation. For those of you who may want to see how the Klan (terrorists) may or may not still be functioning through the years, feel free to click here for the Kloran of the White Knights of the Ku Klux Klan, in Mississippi.

It also appears that the Ku Klos Knights used to be, or may still be the supplier of robes and other items for the KKK, and its various factions.


The Murder Of George Floyd By Killer Cops:


After George Floyd was murdered by some killer cops around a month ago in Minneapolis, there have been thousands of protests, demonstrations, direct-action, and many other activities by millions of people all across the nation in response to the murderous activities of the police. Millions have united in an incredible effort to bring an end to police brutality and to defund the police, so the money can be shifted to other programs meant to assist African-Americans, and people of color.

With police brutality running rampant as the hate groups and white supremacists have recently been appearing at state capitals with their automatic weapons demanding that the economy must be reopened, for the most part the police stood idly by.

Meanwhile, as the reports continue to reveal that the white supremacists, neo-Nazis, and hate groups including the Ku Kulx Klan are the real apparent threats to our country, the Trump regime wants to have antifa designated as a terrorist organization.

Antifa is short for antifascist, and when the white supremacists, neo-Nazis, and the Ku Klux Klan hear the words antifa or antifascist, what they are really hearing is “anti-white.” They fully believe and have convinced themselves that antifa means “anti-white.” This may be the real reason why the impeached President Donald J. Trump, and the Attorney General William Barr, are so anxious to label antifa as a terrorist organization.

>>>>>>>
Add Your Comments
LATEST COMMENTS ABOUT THIS ARTICLE
Listed below are the latest comments about this post.
These comments are submitted anonymously by website visitors.