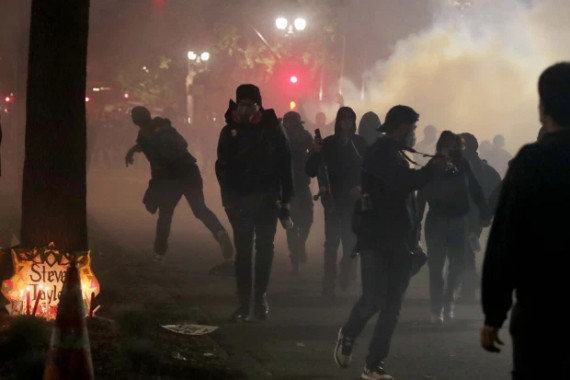 This initial victory is part of a larger lawsuit by the attorneys on behalf of two organizational plaintiffs, Anti Police-Terror Project and Community Ready Corps, and individual plaintiffs, Oakland Tech student Akil Riley and protestors Ian Mcdonnell, Nico Nada, Azize Ngo, and Jennifer Li on behalf of themselves and similarly situated individuals.

As described by Dan Siegel, "The temporary restraining order issued by the court at 6pm tonight is an important victory for the people of Oakland and the struggle against police terror. Less than a day after we filed our request for the TRO, along with a mountain of evidence demonstrating police violence against people protesting racial violence, [US District] Judge Joseph Spero called the attorneys together and then issued the order forbidding police use of tear gas, rubber bullets, and flash bang grenades against protestors, effective immediately. This is the first major step in our lawsuit. We will soon ask the Court to issue a preliminary injunction, with broader provisions, and will prepare for a trial, where we will seek major changes in the operations of OPD and damages for people injured by police violence."

IT IS HEREBY ORDERED, pending further hearing and the Court’s Order, that defendants City of Oakland, Police Chief Susan Manheimer, et al., and all persons acting on their behalf and under their supervision are forbidden from:

1. Using tear gas or any other chemical weapons against persons taking part in a protest or demonstration.

2. Firing rubber bullets or similar projectiles at persons taking part in a protest or demonstration.

3. Firing flash bang grenades at persons taking part in a protest or demonstration.

5. In all actions in which the Oakland Police Department calls in police personnel from other jurisdictions under mutual aid agreements, to the fullest extent possible OPD personnel shall endeavor to assume front line positions between mutual aid officers and demonstrators.

This Order shall remain in effect until further Order of the Court. This matter shall be heard by the Court on July 2, 2020, on Plaintiffs’ motion for a preliminary injunction.

In the words of NLG-SF Counsel James Burch, “This is an important victory in the movement for police accountability - a step towards the larger victories that the people are demanding and that are on the way.”
https://nlgsf.org/victory-for-people-of-oa...
§Full Text of Temporary Restraining Order
by NLG-SF
Thursday Jun 18th, 2020 10:26 PM 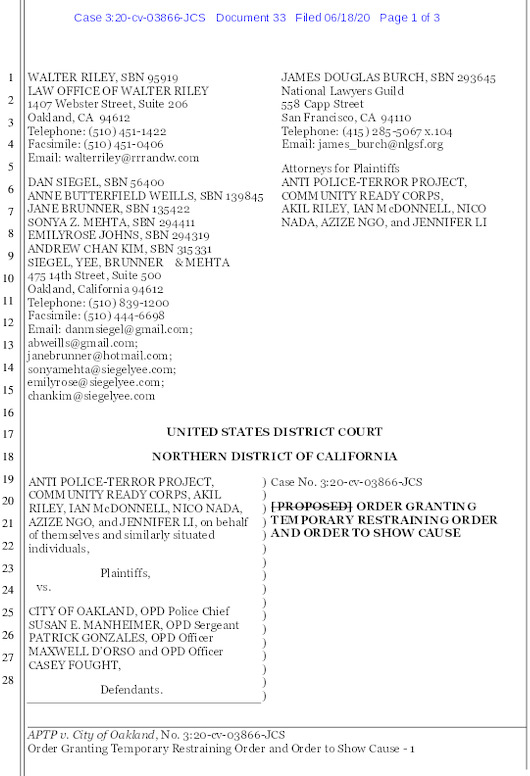 https://nlgsf.org/victory-for-people-of-oa...
Add Your Comments
Support Independent Media
We are 100% volunteer and depend on your participation to sustain our efforts!