Add an Event
Newswire
Calendar
Features
Home
Donate
From the Open-Publishing Calendar
From the Open-Publishing Newswire
Indybay Feature
Related Categories: East Bay | Government & Elections | Police State & Prisons | Racial Justice
Civil Rights Class Action Filed in Reponse to Oakland Police Abuses of George Floyd Protesters
by NLG-SF
Monday Jun 15th, 2020 7:21 PM
"It was so heartening to see so many young Black people expressing their outrage and wanting to be part of the change, and they were attacked by our police department, that tells them 'don't come out here, because we will make your life hard, we will hurt you if you organize, we will hurt you if you say that there is anything wrong with society.'"
— Walter Riley

"I've seen the brutality of OPD firsthand, and I think something needs to be done," said Akil Riley. In these moments of high visibility of police violence, it is critical to "remind everyone that police violence is a daily occurrence in the City of Oakland. So when they kill us tear gas us, respond violently to our protests - those are the most egregious forms. In the Oakland community people are beaten, people are profiled, people are harassed, people are targeted; for women of color, we are sexually assaulted and raped...this is a daily, lived experience of Black and Brown bodies who live in the city of Oakland," said Cat Brooks.

The objectives of this new class action are to enforce accountability and to stand in solidarity with people in the streets. "We demand that the City of Oakland finally be held accountable," said Dan Siegel. "When we see the statue of Robert E. Lee which stands six stories high in Richmond, Virginia, being slated to be taken down, we know we have an opportunity to make change and that is primarily because of the millions of people in the street." He notes that this new lawsuit makes many of the same legal claims as Allen v. City of Oakland, which was settled in 2003 and resulted in a seventeen-year period of federal oversight over the Oakland Police Department.

None of the settlement agreements with the City of Oakland and OPD have prevented what's been happening in Oakland for the past two weeks, says Siegel, but this lawsuit will succeed where others have failed because plaintiffs in the case are not figureheads, but activists who will make sure that lawyers will hold the city accountable. "The NLG-SF takes direction from the movement and from those on the front lines for the changes we are demanding and litigating," said James Burch.

The class of plaintiffs currently consists of two organizations - Anti Police-Terror Project, Community Ready Corps and five individuals, but will grow to include a wide cross-section of impacted people. This diverse class of plaintiffs will "take on the effort to divide the movement" through the use of racist tropes and the "outside agitator" narrative, says Dan Siegel.

"We here at the NLG are doing work to support those who are courageously protesting the brutal and racist system of oppression that we see in Oakland," said James Burch, NLG-SF President and APTP Policy Director. "In this instance it was the Black youth who took to the streets to demand justice for George Floyd, Tony McDade, Breonna Taylor, Steven Taylor, and countless others who have been victims to police violence."

Youth organizer Akil Riley says that the conduct of the police is evidence that they stand with the officer who killed George Floyd. "Emotionally, I don't need to go to a protest to feel a knee on my back," he said. Riley would like to see Oakland Police Department funds reallocated toward education. Oakland is currently facing a $15.1 million cut to its education budget. The Anti Police Terror Project has been advocating to defund OPD for five years and to put those funds toward mental health services.

The lawsuit will also address the use of mutual aid between law enforcement agencies who were present in Oakland in the last two weeks, such as San Francisco PD, Cororan PD, and California Department of Corrections and Rehabilitation. This mutual aid allows the Oakland Police Department to evade accountability for operations it is otherwise prohibited to undertake.

"I'm pleased that we can stand together today and demand a better tomorrow. And we know that a better tomorrow is informed by our youth and the people who have hit the streets."
— James Burch

"This lawsuit is an attempt to join with community forces. We want to push against this narrative that law enforcement is trying to carry out across the country and specifically in Oakland that there are violent demonstrators, and that [OPD] is at war with people who want change. The people who want change represented here want to see structural change in the nature of racism...the racism that comes with housing, healthcare, jobs, and every aspect of our lives. And when they demonstrate their outrage after the brutal murder of George Floyd...they are met with violent, repressive force." The Sheriff's forcible eviction of Moms 4 Housing earlier this year, he says, is "part and parcel of the political outlook that exists in our law enforcement agencies."
— Walter Riley

In March of 2003, the US District Court in San Francisco approved the Negotiated Settlement Agreement in Allen v. City of Oakland, which arose from a pattern of abuse by police officers who called themselves the "Riders." These officers harassed, set up, robbed, and physically abused people in West Oakland. The City of Oakland agreed to pay $10.9 million in damages and attorneys’ fees as part of the settlement. In addition, the city required the OPD to comply with a series of reforms.

In October 2012, plaintiffs in the "Oakland Riders" case petitioned the judge for a receiver to be placed over the Oakland Police Department due to their continued failure to implement reforms. The City of Oakland reached a deal which ceded extensive authority of the department to a court-appointed compliance director. As of 2020, the Oakland Police Department has been under federal oversight for seventeen years.

"The longest-running settlement agreement in the history of the United States is still unfulfilled, and since this time ther have been at least 3 other class actions brought against OPD. None of those agreements prevented what's been happening in Oakland for the past two weeks," says Dan Siegel.

In 2011, the federal government increased its efforts to influence and coordinate local police by creating fusion centers to share intelligence between state, local, and territorial law enforcement as well as the Department of Homeland Security. Sheriff Ahern and DA Nancy O'Malley sit on the board of the Northern California Regional Intelligence Center. Officers from Alameda County provided mutual aid for repression and raids against Occupy Oakland.

In 2018, Joshua Pawlik was killed by OPD, The Alameda County District Attorney’s Office, which reviews all fatal shootings by police, concluded that no crime was committed by the officers. All five were reinstated earlier this year.
http://nlgsf.org
§Legal Compaint filed June 11, 2020
by NLG-SF
Monday Jun 15th, 2020 7:21 PM 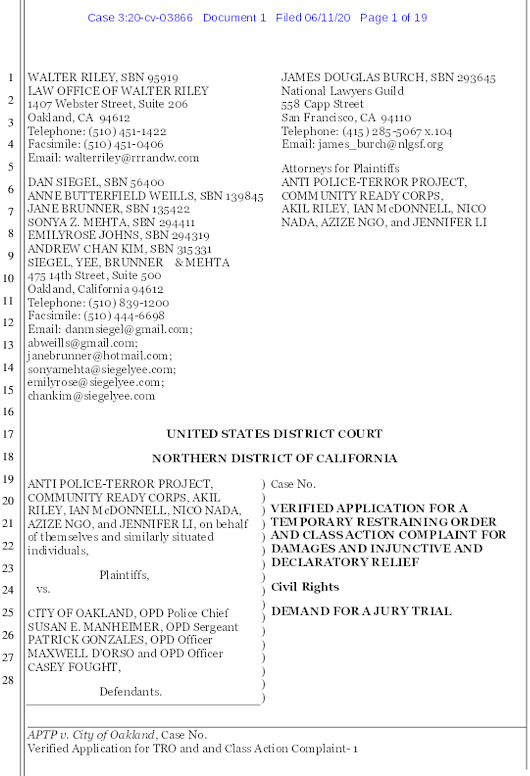