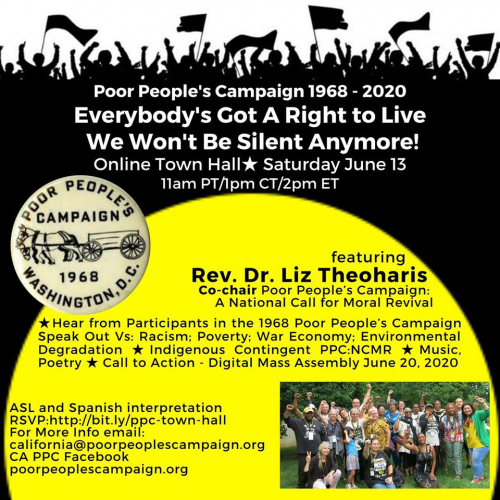 Spanish and ASL interpretation will be provided.

In the context of the uprisings across the country against police killings of Black people and the devastation of COVID-19, people will come together across movements at a virtual town hall titled, "Poor People's Campaign 1968-2020: Everybody's Got A Right to Live! We Won't Be Silent Anymore", which will be held on Saturday, June 13th at 11am Pacific time.

Rev. Liz Theoharis, co-chair of the Poor People’s Campaign: A National Call for Moral Revival, will be the keynote speaker. The town hall is part of the efforts of California PPC to expand the campaign in the state and build towards the Digital Mass Poor People’s Assembly and
Moral March on Washington happening online on June 20, 2020.

The program includes the Rev. Annie Chambers and others who participated in the first Poor People’s Campaign held in 1968 in Washington DC. Additionally, those impacted by the pillars of the Poor People's Campaign: A National Call for Moral Revival — racism, poverty, the war economy, environmental devastation, and the distorted moral narrative — will share their personal stories and how they and their communities are fighting back.

Local Indigenous leaders will open the event, and will also speak about the on-going oppression and denial of rights for Indigenous peoples, and what they are doing to resist.

Music and poetry are part of the program.

For more information, email the Poor People's Campaign in your region:

On June 20th, the Poor People's Campaign will hold the largest digital and social media gathering of poor and low-wealth people, moral and religious leaders, advocates, and people
of conscience in this nation’s history.