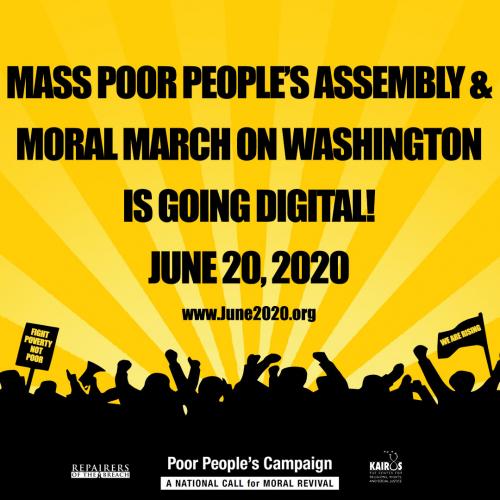 Where: Online via livestream https://www.facebook.com/anewppc/

On June 20th, the Poor People's Campaign will hold the largest digital and social media gathering of poor and low-wealth people, moral and religious leaders, advocates, and people
of conscience in this nation’s history.

A global pandemic is exposing even more the already existing crisis of systemic racism, poverty, ecological devastation, the war economy and militarism, and the distorted moral narrative of religious nationalism.

It’s Time to RISE UP and DO MORE Mobilize, Organize, Register, Educate people for the movement who will use their VOICE and VOTE!

We demand that the nation stop listening to the lies, stop moralizing to the poor about personal responsibility and stop blaming the poor. Instead, we demand that the nation finally address the scandal and immoral reality of structural poverty, systemic racism, ecological devastation, militarism and the war economy, and the distorted narrative of religious nationalism that existed before COVID-19.

We demand that the Moral Agenda and Moral Budget of the Poor People’s Campaign: A National Call for Moral Revival be enacted. After seeing trillions of dollars transferred
to corporations and the wealthy, we will not tolerate the lies of scarcity and the refusal to fully address systemic poverty and its interlocking injustices.

In 1968, Rev. Dr. Martin Luther King Jr. and many others called for a “revolution of values” in America. They sought to build a broad, fusion movement that could unite poor and impacted communities across the country. Their name was a direct cry from the underside of history: The Poor People’s Campaign.

Today, the Poor People’s Campaign: A National Call for Moral Revival has picked up this unfinished work to confront the interlocking evils of systemic racism, poverty, ecological devastation, militarism and the war economy, and the distorted moral narrative of religious nationalism.

We understand that as a nation we are at a critical juncture — that we need a movement that will shift the moral narrative, impact policies and elections at every level of government, and build lasting power for poor and impacted people.

The Poor People’s Campaign: A National Call for Moral Revival is made up of people of all backgrounds, we are Black, Brown, White, Native, and Asian; we are old and young; we are Christian, Sikh, Jewish, Buddhist, Hindu, Muslim; we are people of faith and not of faith; we are people of all sexual orientations and gender identities; we are led by poor people and we are a cross-class movement; we are people of all abilities; and we live across this nation, from Alabama to Alaska, from Maine to California to Mississippi.

https://www.poorpeoplescampaign.org/june2020/mobilizing-partners/
END_OF_DOCUMENT_TOKEN_TO_BE_REPLACED
Added to the calendar on Sun, May 17, 2020 11:51AM
§FLYER: Mass Poor People’s Assembly & Moral March on Washington 2020
by Poor People's Campaign

Download PDF (671.3KB)
END_OF_DOCUMENT_TOKEN_TO_BE_REPLACED
Add Your Comments
Latest Comments
Listed below are the latest comments about this post.
These comments are submitted anonymously by website visitors.
TITLE
AUTHOR
DATE
Opinion Piece: GOP Vote Suppression is a 2020 Scandal
Rev. Dr. William Barber & Tom Steyer
Please Join in Signing an Open Letter to Our Nation’s Lawmakers on Ending Systemic Racism
Poor People's Campaign
Support Independent Media
We are 100% volunteer and depend on your participation to sustain our efforts!