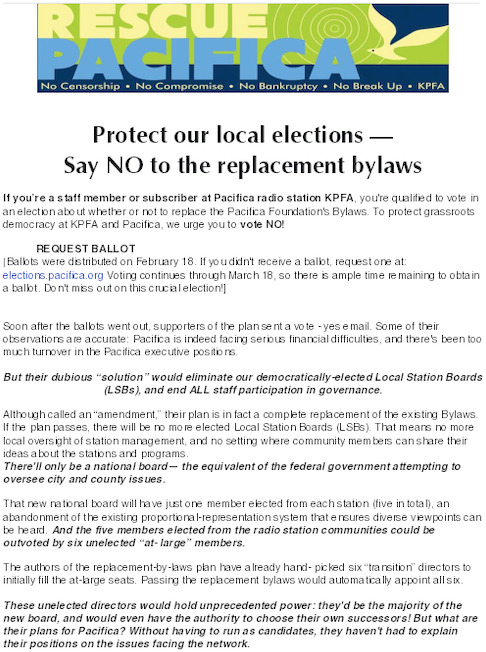 These bylaws would eliminate the local and democratic governance of the 5 nationwide Pacifica radio stations, and replace them with an autocratic, self selecting Pacifica National Board, presently staffed by Directors chosen largely by the local boards plus 2 Directors chosen from the 240 small local stations which are Pacifica affiliates.

The claim is that the democratically elected boards are contentious, unskilled, and ineffective, and have brought Pacifica to the brink of disaster.
Note that:
This system was set up in the early 2000s to prevent an autocratic takeover of Pacifica, and has been preventing a similar takeover since - such as the one being attempted by promulgators of these "new" bylaws!

Note that -
- Democratic governance means debate and discussion, out of which sound decisions can be made;
- The parties which never wanted democracy have purposely blocked such reasoned decision making on the boards by using tactics of disruption;
- and nevertheless this Pacifica Foundation has persisted under these bylaws for around 20 years now!

Along with obstructionism at the boards, financial ruin has been a key tactic of the robber barons now pushing for these bylaws. We have seen financial malfeasance to such an extent that many of us observing these deadly shenanigans have to conclude them purposeful, rather than just stupid and inept.
Not everyone on the side of the raiders now attempting this hostile takeover is guilty of this maneuvering; it is their leadership, which has them deceived. How could such stellar leftists do such a thing? They do it with secrecy and manipulation.

Note these quick points -
PLEASE VOTE NO! BECAUSE:
1. The proposed new bylaws will eliminate the Local Station Boards at all 5 Pacifica stations;
2. The members of each Pacifica station would only be allowed to elect ONE member to the Pacifica National Board (PNB);
(and these reps will not be allowed to be either the Chair or the Treasurer);
3. The other six PNB members shall be appointed and will have the majority control of the PNB;
4. There will be NO staff representatives on the PNB; (now 25% are staff reps)
5. There will be NO Pacifica Affiliate reps on the PNB;
6. The new proposed bylaws will make it easier to sell or trade a Pacifica station and/or a Pacifica radio license;
7. Membership fees will increase to $50/yr or require volunteers to work 15 hours per year to be eligible to vote;
8. The new bylaws will open the door to corporate sponsorship and mainstream political programming;
9. The new bylaws will be easier to amend to enable the break-up of Pacifica and the selling of its assets.

WHAT HAVOC HAVE THE SUPPORTERS OF THESE BYLAWS CREATED SO FAR?
• Secretly formed a KPFA Foundation in 2013 with plans to grab the licenses of KPFA and/or KPFK once bankruptcy is filed;
• Advocated for selling WBAI and/or WPFW;
• Some of these supporters have urged Pacifica to file for bankruptcy and to shut down Pacifica stations (as was tried recently at WBAI);
• Blocked the filing of audits making Pacifica ineligible for Corporation for Public Broadcasting funding;
• Not paid KPFA's real estate taxes for 6 years making the building vulnerable to foreclosure.
[NOTE: Specialist lawyers hired by the PNB have been negotiating this last problem and the station will not be sold.]

NOT SURE HOW TO VOTE?
A No vote will preserve the option to meet current challenges with democratic input.
The network needs more, not less democracy, more informative elections and open governance, and more tools to prevent takeover attempts.
A Yes vote would end democratic governance, likely handing the station over to the raiders, and ending the only unbought unbossed radio network left in the US.

Preserve our democratically-elected governance process!
VOTE NO, by 8pm March19th!

http://www.pacificafightback.org
Add Your Comments
§This got left out
by Longtime listener
Friday Mar 13th, 2020 9:50 PM

Download PDF (35.6KB)
Sorry about the strange format - not what I intended with 1/2 flyer at the top.
Oh well - here's page 2 , the other half, which did not copy:
http://RescuePacifica.net
Add a Comment
§Accountability Is No Joke
by Babble
Friday Mar 13th, 2020 10:15 PM
Those who think accountability to the community and democratic input into a community-based institution is a "buzzword" are pretty dangerous people.

Aki Tanaka is a KPFA local station board member. He is the dysfunction he is complaining about and he could stop acting dysfunctional at any time.

What he is saying here is that he won't stop acting dysfunctional unless all power over the institution is consolidated with his hand-picked choices and he no longer has to attempt to democratically prevail within a diverse elected body based on the merit of his arguments.

Add a Comment
§For democracy, vote NO -- For elitism, vote Yes
by Recent Listener
Friday Mar 13th, 2020 10:20 PM
The Local Station Boards (whose members were all elected) are standing up for democracy by "voting NO", because they know that the proposed Bylaws simply eliminate democracy. So obviously, if you're in favor of democracy, then you too should vote "NO".

However, if you instead prefer for hand-picked elites who are NOT accountable to anyone to be allowed to govern a "progressive radio station", then sure, go ahead and vote "yes". (And for those who weren't aware of it, there was no public process for selecting these "hand-picked directors", let alone for the new Bylaws that we're voting on).
Add a Comment
§Been there, done that
by Akio Tanaka
Friday Mar 13th, 2020 10:32 PM
I was the Secretary of both the PNB and the Audit Committee in 2017.
I think I saw as much as one needs to see.
Add a Comment
Support Independent Media
We are 100% volunteer and depend on your participation to sustain our efforts!