Add an Event
Newswire
Calendar
Features
Home
Donate
From the Open-Publishing Calendar
From the Open-Publishing Newswire
Indybay Feature
Publish to Newswire
Add an Event
Related Categories: Santa Cruz Indymedia | Government & Elections
Big Money: Campaign Finance Totals for the Recall in Santa Cruz
by Santa Cruz News Network
Saturday Feb 22nd, 2020 1:25 PM
Groups in support of the recall in Santa Cruz have raised $176,408 total in cash donations, while groups opposing the recall have only taken in $31,804, according to the current campaign finance reports available on the City's website which reflect contributions and expenditures made through February 15. Of the City Council replacement candidates, Renée Golder raised the most in cash donations at $28,426, Don Lane follows her with $12,253, Katherine Beiers raised $10,499, and Tim Fitzmaurice raised $6,838. Big money has never entered a City Council election in Santa Cruz like it has in the campaign to recall Councilmembers Drew Glover and Chris Krohn, which was organized to break up the new Progressive majority on the Council, the first of its kind in 16 years. Santa Cruz News Network has previously published an itemized list that shows real estate interests accounted for more than half of the total monetary contributions supporting the recall campaign, as reported to the City through January 18. (Photo: Santa Cruz City Councilmembers Drew Glover and Chris Krohn.) 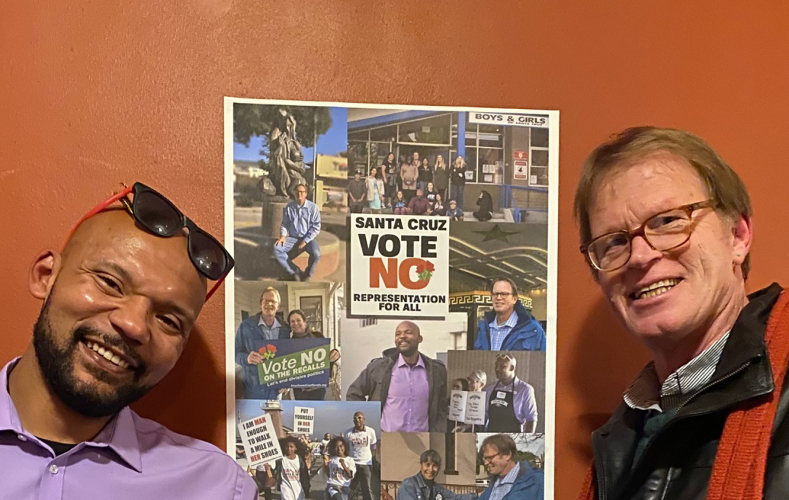 Two groups have been raising funds to support the recall: Santa Cruz Together raised $131,153, and Santa Cruz United raised $45,255, out of the $176,408 in total raised through February 15. Additionally, Santa Cruz Together began 2019 with a balance of $29,528, which was left over from funds the group raised to fight Measure M and rent control in the City of Santa Cruz in 2018.

Two groups have been raising funds to oppose the recall: the Stop the Recalls group raised $28,466, and a group organized by Erica Aitken raised $2,618, out of the $31,804 in total raised through February 15.

Councilmember Chirs Krohn has not had an open campaign committee since 2017.

Current campiagn finance forms filed with the City of Santa Cruz can be found: here.