Add an Event
Newswire
Calendar
Features
Home
Donate
From the Open-Publishing Calendar
From the Open-Publishing Newswire
Indybay Feature
Publish to Newswire
Add an Event
Related Categories: U.S. | Health, Housing & Public Services
The unhoused continue to have protections for sleeping on public property
by Lynda Carson (tenantsrule [at] yahoo.com)
Monday Dec 16th, 2019 5:18 PM
A 2008 photo of some low-income tenants in front of the California Hotel in Oakland, fighting back against their evictions by the John Stewart Company & the now dissolved Oakland Community Housing, INC. (OCHI), that would have made them homeless! Photo by Lydia Gans 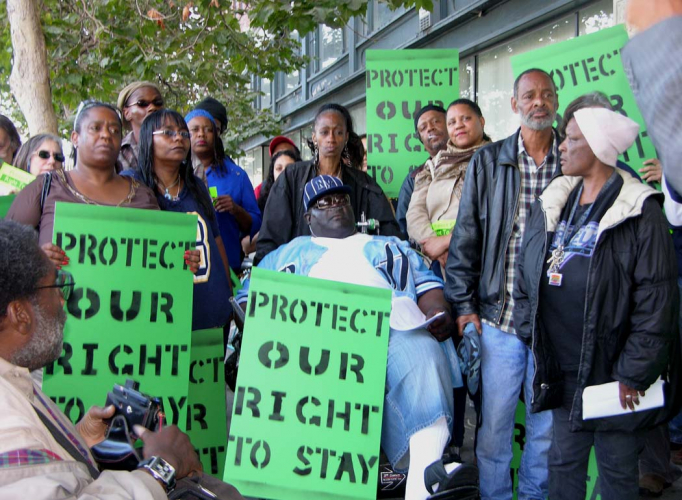 In a case known as Boise, Idaho v Robert Martin, et al, earlier today the U.S. Supreme Court denied to hear a case that would ban the homeless (the unhoused) from sleeping in public spaces when they have no place to go. Over 2,000 years ago, reportedly even Joseph and Mary, the parents of Jesus were unhoused and stayed in a stable when the birth of the Christ occurred.

If Boise, Idaho had it their way, Boise and other cities backing their case attacking the unhoused including Los Angeles known as Boise, Idaho v Robert Martin, et al, they would all make it a crime for the unhoused to sleep in public spaces even when there is no place to go, which is a clear violation of the 8th amendment and the U.S. Constitution’s ban on cruel and unusual punishment. What a world.

According to NPR, “The decision to let a ruling from the 9th Circuit Court of Appeals stand is a setback for states and local governments in much of the West that are grappling with widespread homelessness by designing laws to regulate makeshift encampments on sidewalks and parks.”

As reported last year on the IndyBay News Wire, “In a wide sweeping victory for the homeless/houseless people of Oakland, California, Idaho, and other Western states, on Tuesday September, 4, 2018, the 9th Circuit Court of Appeals declared that prosecuting homeless/houseless persons for sleeping on public property when there is no shelter available to them is a violation of the 8th amendment and the U.S. Constitution’s ban on cruel and unusual punishment.”

Thanks to six brave homeless or formerly homeless souls including Robert Martin, Lawrence Lee Smith, Robert Anderson, Janet F. Bell, Pamela S. Hawkes, and Basil E. Humphrey, who fought back against an inhumane system of cruel and unusual punishment, yesterday’s ruling will protect the vulnerable homeless population from vicious anti-homeless ordinances that many Cities use to punish poor people for being unable to find shelter.

A Release From The National Coalition for the Homeless:

In a release today from the National Coalition for the Homeless, “NATIONAL COALITION FOR THE HOMELESS WELCOMES SUPREME COURT DECISION TO ALLOW MARTIN V. BOISE CASE STAND.  CALLS FOR NEW INVESTMENTS TO ADDRESS THE UNDERLYING CAUSES OF STREET HOMELESSNESS.”

“The National Coalition for the Homeless applauds the decision of the U.S. Supreme Court to deny a review of the Martin v. Boise case, leaving in place the decision by the 9th Circuit that people experiencing homelessness cannot be punished for camping or sleeping on public property where there are no adequate alternatives.

The Boise decision remains the law, at least in the states within the 9th U.S. Circuit.  Criminalizing homelessness, in absence of reasonable and acceptable alternatives to sleeping on the streets, is unconstitutional, and cities and states must act to develop adequate shelter and affordable to address homelessness in their communities.

“Today is a victory for people experiencing homelessness”, said John Parvensky, Acting Executive Director of the National Coalition for the Homeless.  “It is not a victory because people can legally sleep on the streets.  Rather it is a victory because it will force communities to address homelessness proactively – through the development of an adequate supply of affordable housing, while providing safe and appropriate emergency shelter in the interim”.

NCH calls of the Federal Government to immediately and significantly increase its investment in both housing and services for those experiencing homeless as well as in broader pubic and affordable housing for those at risk of becoming homeless.”

The Further Criminalization Of The Unhoused:

Things are so bad for the unhoused that Oakland and San Francisco have been named as human rights violators.

Making matters worse for the unhoused, some of the latest so-called affordable housing lists for December 2019 in San Francisco continue to reveal the nonprofit housing organizations and their on-going cruel policies of “minimum income requirements,” that exclude much of the poor from their housing projects, including Martin Luther Towers managed or owned by the John Stewart Company (JSCO), Yerba Buena Gardens, The Knox (JSCO), Bayanihan House, 1601 Mariposa, and 2100 Market.