Add an Event
Newswire
Calendar
Features
Home
Donate
From the Open-Publishing Calendar
From the Open-Publishing Newswire
Indybay Feature
Publish to Newswire
Add an Event
Related Categories: East Bay | Health, Housing & Public Services
Homeless/houseless people may not face prosecution for sleeping on public property
by Lynda Carson (tenantsrule [at] yahoo.com)
Wednesday Sep 5th, 2018 1:45 AM
A 2008 photo of some tenants of the California Hotel, with help from Just Cause Oakland, protesting against the illegal mass evictions of the tenants by Oakland Community Housing, Inc., and the John Stewart Company, that threatened the tenants with homelessness. Photo by Lydia Gans. 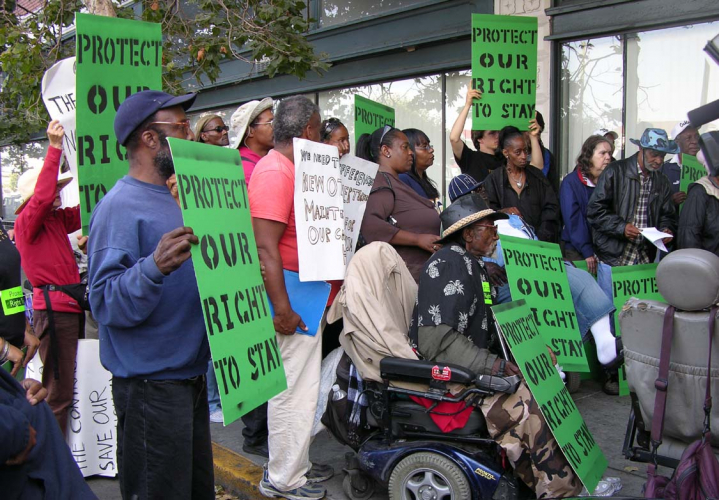 Oakland - In a wide sweeping victory for the homeless/houseless people of Oakland, California, Idaho, and other Western states, on Tuesday September, 4, 2018, the 9th Circuit Court of Appeals declared that prosecuting homeless/houseless persons for sleeping on public property when there is no shelter available to them is a violation of the 8th amendment and the U.S. Constitution’s ban on cruel and unusual punishment.

During 2017, a homeless count in Alameda County revealed that on January 30, 2017 there were 5,629 persons experiencing homelessness. This included 3,863 living souls that were unsheltered living in tents, parks, vehicles, vacant buildings, underpasses, etc. Homelessness was up by a shocking 25% in Oakland during the past year. Oakland has the fastest pace for gentrification and displacement in the Bay Area. Greedy landlords, realtors, and developers are spending a fortune against Proposition 10, the Affordable Housing Act, so that they can continue with their eviction-for-profit schemes, and never ending rent increases. The median monthly rent in Oakland during July 2018, was a whopping $3,200.

A ‘YES’ vote for Proposition 10 in November, the Affordable Housing Act, would help to address the on-going homeless crisis in Oakland, and never ending extreme rent increases throughout California.

Thanks to six brave homeless or formerly homeless souls including Robert Martin, Lawrence Lee Smith, Robert Anderson, Janet F. Bell, Pamela S. Hawkes, and Basil E. Humphrey, who fought back against an inhumane system of cruel and unusual punishment, yesterday’s ruling will protect the vulnerable homeless population from vicious anti-homeless ordinances that many Cities use to punish poor people for being unable to find shelter.

Reportedly, 10 cities in the United States of America with the most homelessness in 2017 include New York, Los Angeles, Seattle, San Diego, District of Columbia, San Francisco, San Jose and Santa Clara, Boston, Las Vegas, and Philadelphia.

Homeless Deaths On The Rise:

In a recent attack on the homeless population in California, reportedly the state Assembly passed an Orwellian bill to expand conservatorship rules allowing city officials to have more control over homeless persons who can be involuntarily held for mental-health treatment. Anti-homeless person politician Sen. Scott Weiner (D- San Francisco) is already promoting SB 1045 as a fascist vicious assault on the homeless population in San Francisco, San Diego, and Los Angeles counties to fund five-year pilot programs to enforce conservatorship rules on the homeless. These are draconian punitive programs threatening to take control over the lives and activities of the homeless, including control of their income. This bill is an expansion of the tyrannical Laura’s Law.

A ‘YES’ vote for Proposition 10 in November, the Affordable Housing Act, would help to address the on-going homeless crisis in Oakland, and never ending extreme rent increases throughout California. Vote ‘YES’ on Prop. 10 in November to repeal the extreme Costa-Hawkins Act.