Add an Event
Newswire
Calendar
Features
Home
Donate
From the Open-Publishing Calendar
From the Open-Publishing Newswire
Indybay Feature
Publish to Newswire
Add an Event
Related Categories: Santa Cruz Indymedia | Health, Housing & Public Services | Media Activism & Independent Media
'Santa Cruz Keepin' it Real' Blogger Apologizes for Creating Fake News Posts
by Santa Cruz News Network
Monday Aug 26th, 2019 6:12 PM
Joe Netro, who authors the Santa Cruz, CA: Keepin' It Real hate blog anonymously as 'Big Joe 77', has admitted to creating a fake news story over the course of multiple blog posts about California State Assembly Bill 516 (AB 516). Netro apologized to his followers on August 22 for the "confusion", calling the multiple false posts he made a "mistake". "If you have lost the trust and would like to track this Bill for yourself, here's the link," Netro wrote. (Photo: Joe Netro aka 'Big Joe 77' speaks at the Santa Cruz County Board of Supervisors meeting on May 14, 2019.) 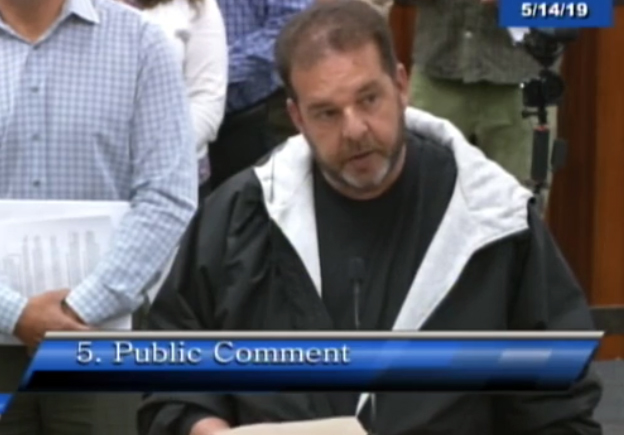 Assembly Bill 516 is a state bill which would amend the California vehicle code to extend the amount of time before local authorities may legally tow a vehicle parked in public, and would also prevent the sale of vehicles after they are impounded to cover towing expenses. The bill is seen as a much needed protection for low income residents in the state; having a vehicle towed can devastate lives, including those of struggling families and homeless people who live in their vehicles.

Santa Cruz City Staff authored a letter opposing AB 516 and placed it on the consent agenda prior to the City Council meeting on August 13, in hopes it would be approved by the Council and sent on to State Legislators. At that meeting, however, Councilmembers Drew Glover, Chris Krohn, Sandy Brown, and Justin Cummings voted not to send the letter due to concerns for low income and homeless residents.

In a post on Santa Cruz, CA: Keepin' It Real dated August 14, Joe Netro claimed that AB 516 was "dead", and in another post on the blog dated August 15, he lambasted the city council for not knowing the bill was dead, and for not reading his email sent anonymously to them as 'Big Joe 77' on August 12, which stating essentially the same (see photos).

"Senate Appropriations Committee Meeting Update: This committee Heard AB 516 on 8/12. The whole thing takes about 15 seconds. They threw this Bill in the trash."

"So, 1 day AFTER the Senate Appropriations committee threw AB 516 in the trash...The Santa Cruz City Council drafted a letter in opposition to 516, and placed it in their consent agenda. Not one person on the council, even the ones that said they were "following this Bill closely," even knew that the Bill was dead. Not one person on the council even bothered to read their agenda packets. Our dysfunctional local government in action."

Netro did not simply make one reporting "mistake" (as he phrased it) about AB 516; he created two separate posts centered on the fake news, he contacted the Santa Cruz City Council and presented it as legitimate news, he attempted to rally the community to contact the City Council, and he admonished Councilmembers for not reading the fake news he sent them.

Retractions are rare for Joe Netro; he does not fact check his work, and his one-sided and often anti-homeless blog is the source of constant misinformation about everything he "reports" on, including issues related to low income individuals living in recreational vehicles, crime, and the court cases he posts about. Netro regularly posts inaccurate and or completely false information that is left to stand on the blog, and community members who call him out for posting false information are censored and blocked. One reason Santa Cruz, CA: Keepin' It Real has been identified as a hate blog by the public is because Joe Netro uses the platform to wage extreme personal attacks on his political targets. Increasingly, however, individuals interested in breaking news related to crime and public safety are turning to heavily biased hate blogs for information and reporting.

Along with his friend, Santa Cruz Republican Party Central Committee member Paige Concannon, who is an avid Donald Trump supporter, Joe Netro has also been responsible for spreading misinformation about Santa Cruz City Councilmembers Chris Krohn and Drew Glover. Netro is an avid supporter of the recall effort in Santa Cruz, and he endorsed losing candidate Concannon for the 2018 Santa Cruz City Council election that she lost to Glover. Netro describes himself as a life-long Democrat, however he has endorsed other Republicans for office, and his political views are generally very extreme. 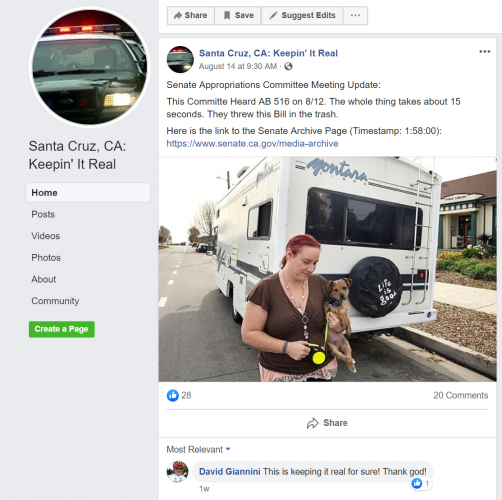 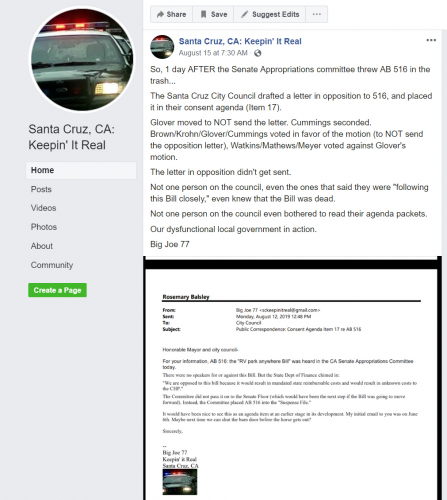 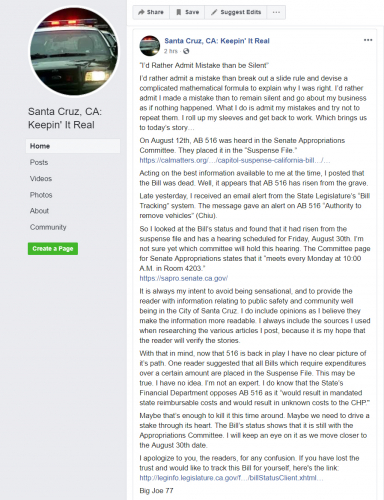 original image (897x1165)
Add Your Comments
Support Independent Media
We are 100% volunteer and depend on your participation to sustain our efforts!