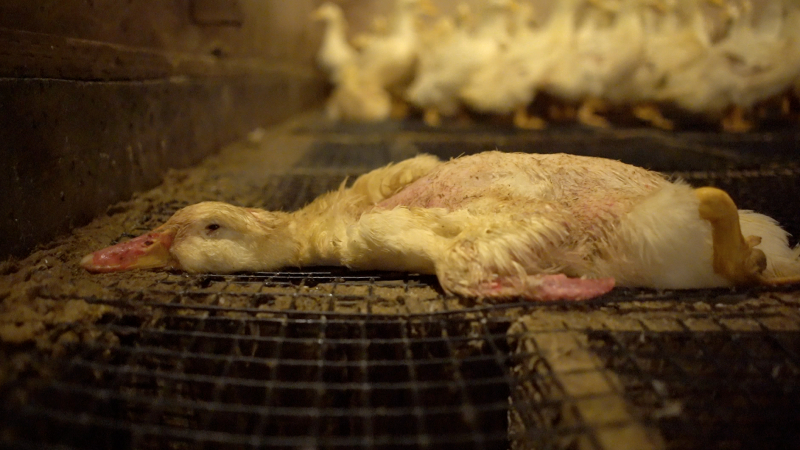 original image (1886x1062)
The facility, which has ties to farm-to-table pioneer Alice Waters and slaughters 1 million ducks annually, has been the subject of numerous reports of animal cruelty, including birds with gaping wounds and collapsed on the wire floor. Despite these complaints -- and damning opinions by a prominent veterinarian and a former federal prosecutor -- local authorities have failed to take action against the company. The activists, who donned veterinarian-approved biosecurity gear as they entered the facility to give aid to sick and injured animals, say their actions are a necessary response to a pattern of corporate and government misconduct.

“The conditions are not normal, accepted industry practice,” former assistant US Attorney Bonnie Klapper, who reviewed undercover footage and veterinarian reports regarding the facility, said. “They are evidence of severe neglect and lack of treatment rising to the level of animal cruelty.”

Former Baywatch actress Alexandra Paul will attempt to negotiate for the rescue of any animals in need of medical care.

In the past year, dozens of activists have been arrested and charged in relation to nonviolent animal rights activism in Sonoma County. The activists say the prosecutions, which have been pushed by elected officials who take donations from agribusiness interests, are examples of the improper use of government resources to defend corporate interests. Now both a prominent criminal law scholar, UC Hastings scholar Hadar Aviram, and former federal prosecutor agree.

“The government is protecting powerful corporate interests, even where those companies are engaged in unlawful, fraudulent, and tortuous practices,” DxE co-founder and former law professor Wayne Hsiung, a defendant in the Petaluma Poultry case, said. “We’re merely asking the elected officials in Sonoma County to enforce the law -- including against animal-abusing corporations.”

original image (2626x1302)
In the original post by DxE, they write, "The facility, which has ties to farm-to-table pioneer Alice Waters and slaughters 1 million ducks annually ..." and hotlink 'Alice Waters' to an article about Liberty Ducks, published on September 16, 2011 in Edible Marin & Wine Country.

The supposed connection between "Alice Waters" and a facility which "slaughters 1 million ducks annually" is not explained in the original post by DxE.

Jennifer Reichardt, in an email on behalf of Sonoma County Poultry, Liberty Ducks, explains, "There are two different duck farms in Petaluma. The protest farm today (6/3/19), Reichardt Duck Farm, and our duck farm, Sonoma County Poultry, Liberty Ducks. We are the farm that supplies to Alice Waters and we have not been associated with the protest farm for over 25 years."

On June 4, 2019, a statement on the homepage of Liberty Ducks states, "Please note that the current press regarding a duck farm in Petaluma is not associated with Liberty Ducks. We are a separate farm. For more questions, please email libertyducks [at] gmail.com
Thank you."
Add Your Comments