Add an Event
Newswire
Calendar
Features
Home
Donate
From the Open-Publishing Calendar
From the Open-Publishing Newswire
Indybay Feature
Publish to Newswire
Add an Event
Related Categories: Santa Cruz Indymedia | Health, Housing & Public Services
City Council May End Enforcement of Overnight Parking Restrictions on Delaware
by Santa Cruz News
Sunday Feb 24th, 2019 8:10 PM
On Tuesday, February 26 at 7pm, the Santa Cruz City Council will discuss the declaration of a homeless shelter crisis, and act on a motion directing the city manager to end enforcement of overnight parking restrictions on Delaware Avenue between Swift Street and Shaffer Road, where parking is currently prohibited between the hours of 12am and 6am. A comprehensive set of policy and action items are scheduled to be discussed during the council's evening agenda that are intended to ease the impact on the homeless community that will result when authorities clear, by March 15, the large homeless encampment called the "Heroes Camp", which is located between Highway One and Gateway Plaza in Santa Cruz. Photo: Heroes Camp. Credit: Santa Cruz City Councilmember Drew Glover. 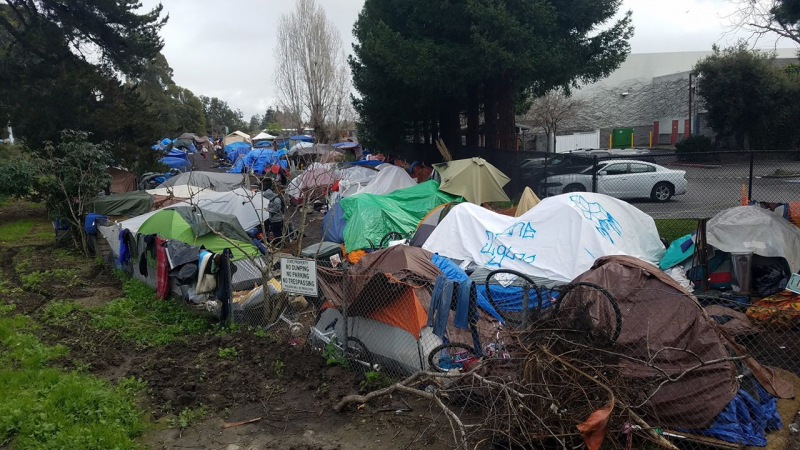 original image (1280x720)
A robust anti-homeless NIMBY campaign urging the council to oppose the easing of parking restrictions on Delaware has been launched by residents on the Westside, including former Santa Cruz Chief of Police Kevin Vogel.

One fear-mongering flyer being distributed on social media warns that RVs will be allowed to park without restriction on Delaware avenue "24/7", which will lead to "crime, drugs, pollution, and toxic waste".

Personal injury attorney Marc C. Schwartz wrote a letter to the city council threatening that if overnight parking were allowed to occur on Delaware, "lawsuits will follow".

The politically conservative Scontriano's have as an entire family publicly opposed the easing of parking restrictions on Delaware. Failed city council candidate Ashley Scontriano, who is a Republican and rabidly anti-homeless, is using her 2018 campaign website to mobilize opposition to the proposed parking changes, and both of her parents, Marita and Peter, have passed along to the council a chain letter (sent by others as well) that contains a somewhat illogical warning:

"Should council members Krohn and Glover and any others vote in favor of this they will be held in breach of duty, negligence of duty, and the only thing needing further is damages to be resultant from their actions to disregard or suspend current city ordinances City council members are not above the law. They can and will be held civilly and criminally liable for any damages that result from their actions to waive, suspend or amend any state, city, or county ordinances that they have taken an oath/are sworn to uphold."

Opposition to easing the parking restrictions has also been heard from more moderate members of the community. Local artist Janet Allinger sent a strong anti-homeless message to the council:

"We are opposed to the intentions of council members Krohn and Glover concerning parking for transients on Delaware Avenue. I ride my bike down Delaware often when heading to or from Wilder Ranch and it is a mess! Tired of seeing RV owners leaving garbage, human waste, working on their broken down vehicles and drug use/sales. I, along with many neighbors do not feel comfortable walking down Delaware anymore. I’m sure visitors who come to enjoy the beach or Natural Bridges park feel the same way. I’ve lived her in SC for over 20 years and I think it’s the worst it’s ever been. So sad."
§Agenda Report
by Santa Cruz News Sunday Feb 24th, 2019 8:10 PM 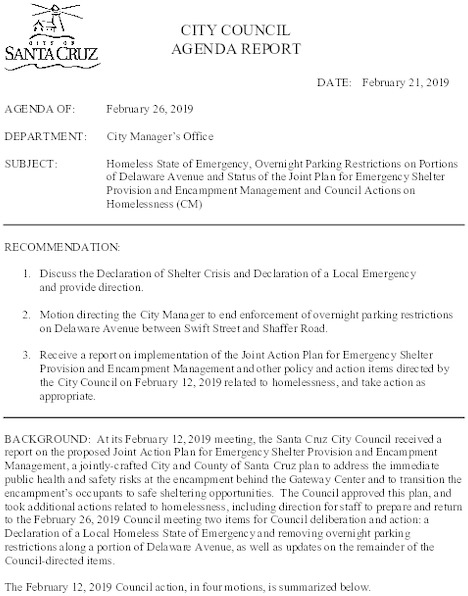 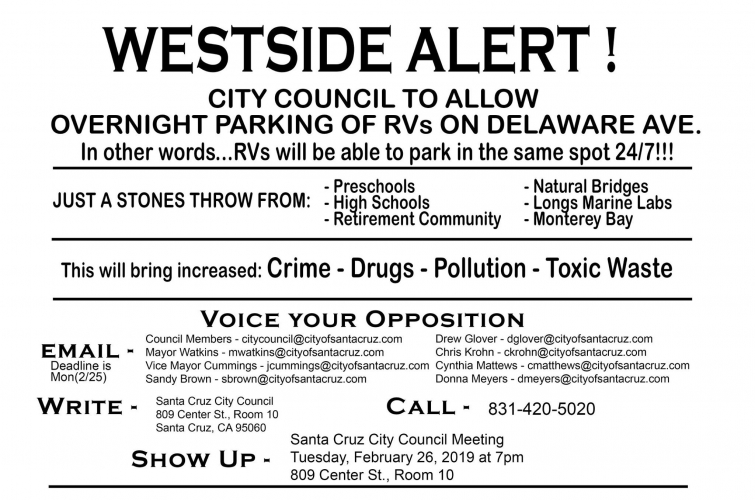 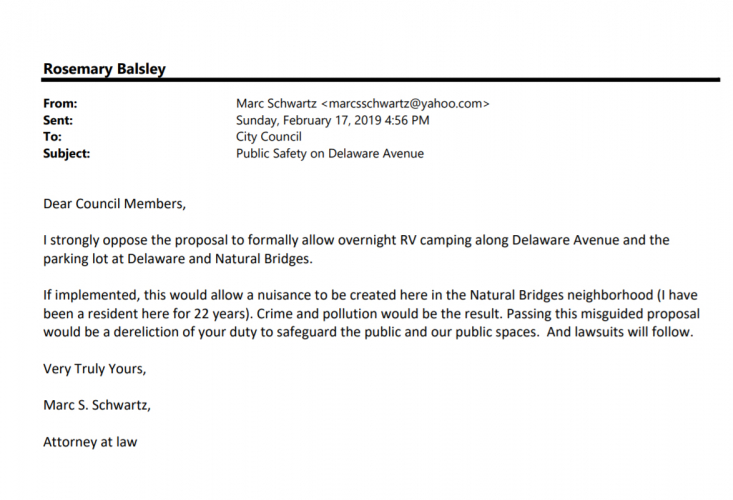 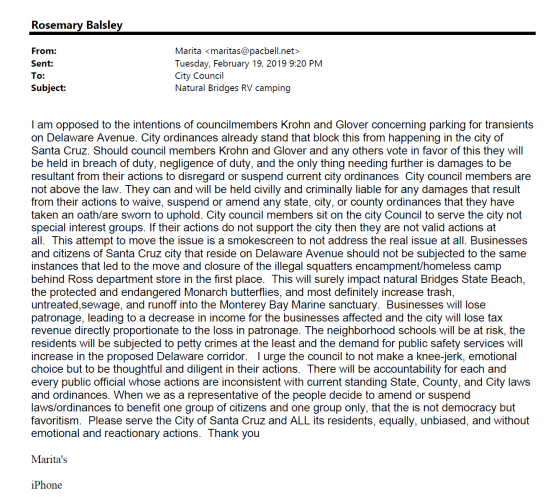 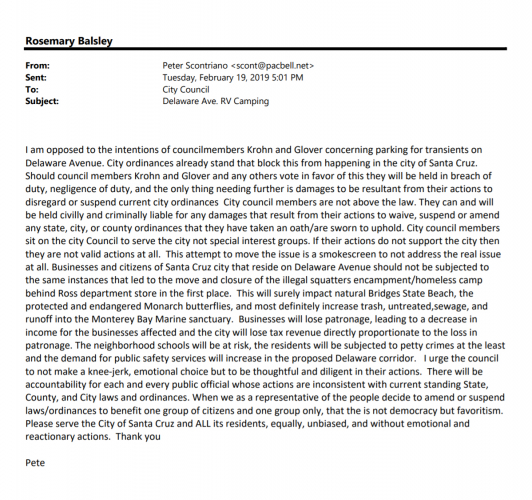 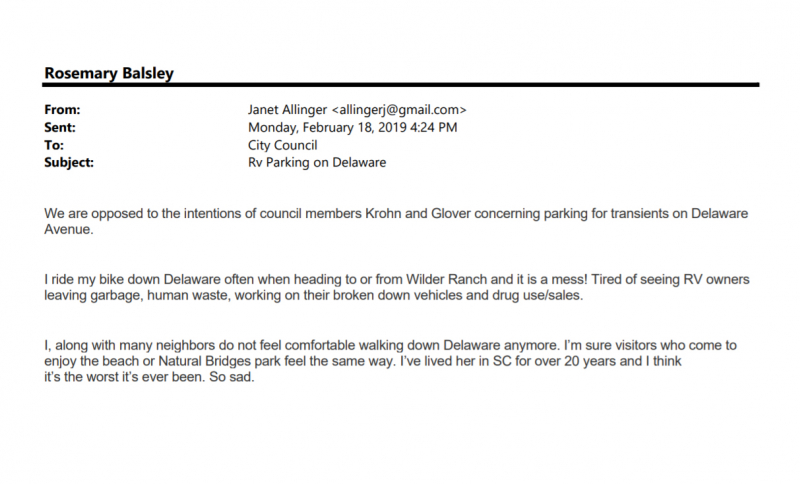 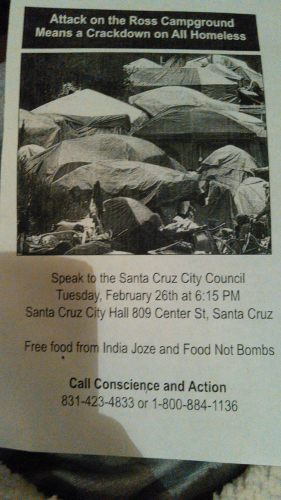 original image (1152x2048)
"Attack on the Ross Campground Means a Crackdown on All Homeless"
§Take Back Santa Cruz Wants to Block Homeless Advocates out of Council Chambers
by Santa Cruz News Monday Feb 25th, 2019 11:45 AM

Take Back Santa Cruz member Steve Schlicht who is "Ben Dover" of the Santa Mierda hate blog is calling for people to block homeless advocates from entering city council chambers on Tuesday night. 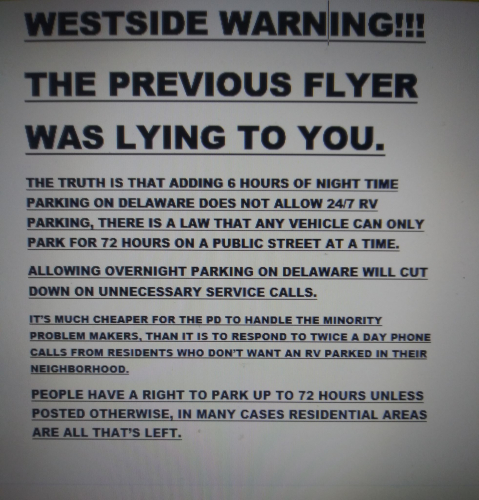 original image (1963x2048)
Homeless advocates are distributing this flyer in response to the anti-homeless one.
§Update: Heroes Camp to remain open, Parking on Delaware not Addressed by Council
by Santa Cruz News Sunday Mar 3rd, 2019 1:07 AM
In a 4-3 vote, the city council decided to lift the March 15 closure date for the Heroes Camp until more people from the camp are found housing. The issue of parking restrictions on Delaware was not heard by the council. The issue may come back at a later date.

Here is an article about the meeting. There is an interesting quote about vigilantism in it as well.

"Any end or closure date for the Ross homeless encampment has been put on hold for now as Santa Cruz city leaders discuss how to transition those living at the camp site into shelters."

"Both say some "vigilantism" from residents is making it harder to live at the encampment but they're doing what they can to begin the transition into a shelter."

§Flyer of Interest To Those Interested in Restoring Rights and Services to the Unhoused
by Robert Norse (rnorse3 [at] hotmail.com)
Monday Feb 25th, 2019 7:53 PM 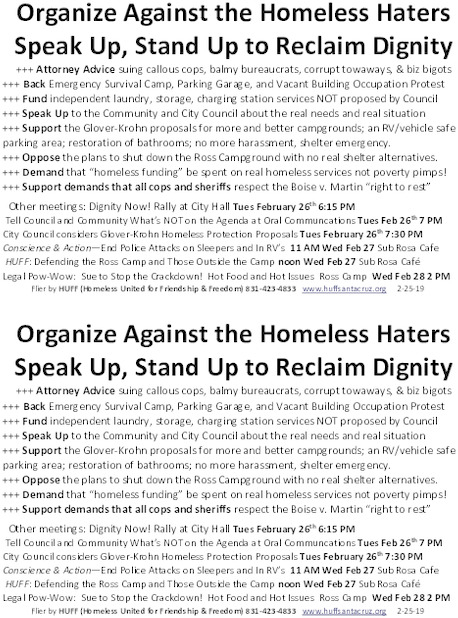 Download PDF (524.4KB)
Download and distribute widely
http://www.huffsantacruz.org
Add a Comment
§Overnight RV restrictions not permitted by CCC
by John Cohen-Colby
Monday Feb 25th, 2019 8:17 PM
The California Coastal Commission never permitted the overnight RV parking restrictions on Delaware (which is in the Coastal zone). They directed the City of Santa Cruz to take down the illegal parking signs. The Santa Cruz Police Department has been committing fraud (on a vast scale) by illegally ticketing and seizing RVs on Delaware and in other parts of the Coastal zone.
Add a Comment
§Council has no say, the CA Coastal commission already allows it
by Pat Colby
Monday Feb 25th, 2019 8:32 PM
It is already legal to park overnight in many places being mentioned. All the places within the Coastal Zone have been legal for over four years since CA Coastal Commission denied the permit to allow the City of Santa Cruz to ban over night parking for RV and other vehicle dwellers.

Victims of illegal overnight tickets need to come together to sue the City of Santa Cruz. If you have received these false tickets or had your vehicle illegally towed or taken because of these illegal tickets you need to sue to get back your money, vehicle plus damages. You can get copies of all your parking tickets if you lost your originals. First you have to band together to standup against the illegal actions by the SCPD and the City.

The SCPD and sheriff have been violating the state of CA by giving out these false tickets. It isn't just a matter of permission. Again if you are packing in the Coastal Zone you can't be ticketed for over night parking.
Add a Comment
§Working woman living in RV
by Sheryl Fry
Wednesday Feb 27th, 2019 2:18 PM
I am new to Santa Cruz and currently living in my RV. I have been issued a ticket for parking over night on Delaware Ave. I don't do drugs don't dump trash and I go to Seabright every 2 weeks to dump my sewage. Allowing overnight parking is good. I work for UberEats and I'm disabled. I can't get into a park because my RV is older than a 2002. I just want to have a place to sleep instead of driving out past Davenport round trip daily.
Add a Comment
Support Independent Media
We are 100% volunteer and depend on your participation to sustain our efforts!