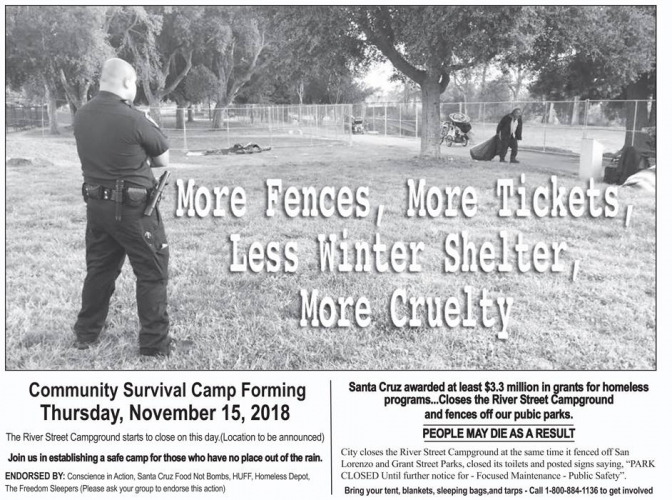 The River Street Campground starts to close on this day.(Location to be announced)

Santa Cruz awarded at least $3.3 million in grants for homeless programs...Closes the River Street Campground and fences off our pubic parks.

PEOPLE MAY DIE AS A RESULT

Join us in establishing a safe camp for those who have no place out of the rain. 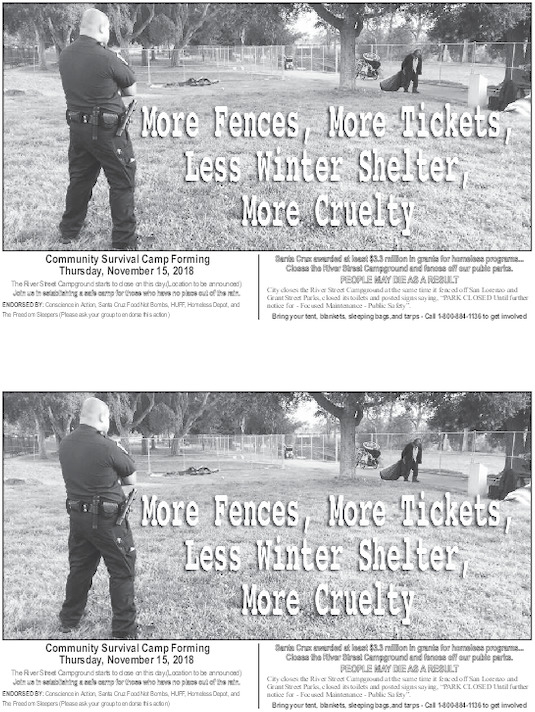 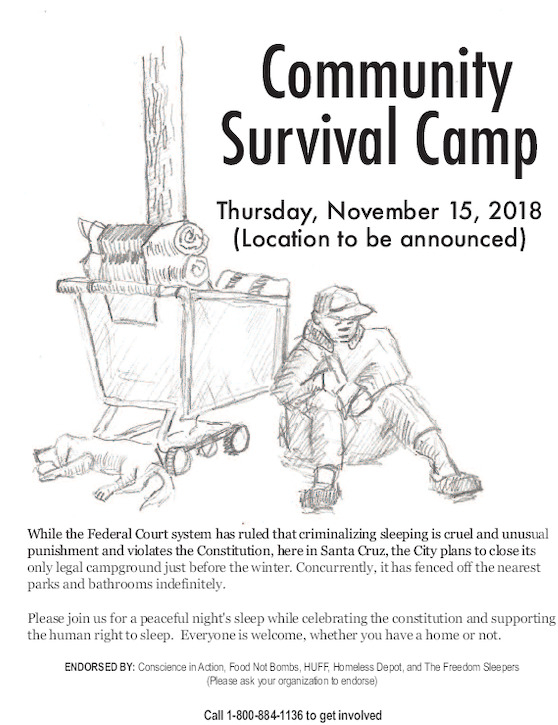 A small group of housed and unhoused folks met to plan strategies to counter the closing of the River St. Campground and the continued busting of homeless folks outside.
Add a Comment
§Background to the Community Survival Camp Decision
by Robert Norse
Wednesday Oct 31st, 2018 9:18 AM 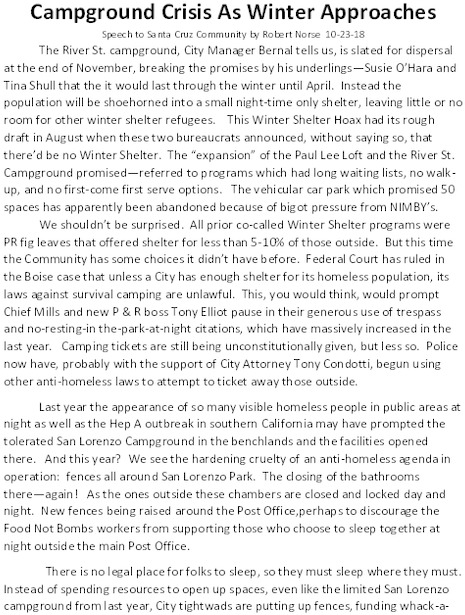 The River St. campground, City Manager Bernal tells us, is slated for dispersal at the end of November, breaking the promises by his underlings—Susie O’Hara and Tina Shull that the it would last through the winter until April. Instead the population will be shoehorned into a small night-time only shelter, leaving little or no room for other winter shelter refugees. This Winter Shelter Hoax had its rough draft in August when these two bureaucrats announced, without saying so, that there’d be no Winter Shelter. The “expansion” of the Paul Lee Loft and the River St. Campground promised—referred to programs which had long waiting lists, no walk-up, and no first-come first serve options. The vehicular car park which promised 50 spaces has apparently been abandoned because of bigot pressure from NIMBY’s.

We shouldn’t be surprised. All prior co-called Winter Shelter programs were PR fig leaves that offered shelter for less than 5-10% of those outside. But this time the Community has some choices it didn’t have before. Federal Court has ruled in the Boise case that unless a City has enough shelter for its homeless population, its laws against survival camping are unlawful. This, you would think, would prompt Chief Mills and new P & R boss Tony Elliot pause in their generous use of trespass and no-resting-in the-park-at-night citations, which have massively increased in the last year. Camping tickets are still being unconstitutionally given, but less so. Police now have, probably with the support of City Attorney Tony Condotti, begun using other anti-homeless laws to attempt to ticket away those outside.

Last year the appearance of so many visible homeless people in public areas at night as well as the Hep A outbreak in southern California may have prompted the tolerated San Lorenzo Campground in the benchlands and the facilities opened there. And this year? We see the hardening cruelty of an anti-homeless agenda in operation: fences all around San Lorenzo Park. The closing of the bathrooms there—again! As the ones outside these chambers are closed and locked day and night. New fences being raised around the Post Office,perhaps to discourage the Food Not Bombs workers from supporting those who choose to sleep together at night outside the main Post Office.
There is no legal place for folks to sleep, so they must sleep where they must. Instead of spending resources to open up spaces, even like the limited San Lorenzo campground from last year, City tightwads are putting up fences, funding whack-a-mole type operations, and endorsing the Downtown Association’s private downtown snitch program which it pompously calls Ambassadors.
These visible attacks on poor people outside are risky for authorities given the 9th Circuit Court’s latest action. All that’s needed is for a few savvy attorneys, looking to make a few bucks, file a lawsuits—as is happening in other cities. And homeless folks who have finally had enough and decide to resume sleeping together where they can and where they must. As the temperatures drop and tempers rise, these prospects become more likely. Particularly if the Community supports them.
Supports real homeless people—not the Pathway to Poverty programs . When will the Homeless (Lack of) Services Center restore meals it traditionally provided, remove its gates, ID checks, guards, and “Low Impact” zone? When will groups like the “Smart Solutions” take real action to demand those outside not be treated like pariah’s fleeing police, faceing locked facilities, and braving nighttime vigilante surveillance and harassment? Agencies receiving the big bucks and city recognition but not providing the vital services need to be seen for what they are. Those who care can then support homeless people directly or through agenices that actually provide more than closed waiting lists, phone numbers that don’t answer, and “pathway to housing if you have a funding source’ “solutions”.

There is plenty of campground space in Santa Cruz, if the bleating of bigots is ignored. And that is what the overwhelming majority of homeless folks will be doing tonight and throughout the winter. Right now, the question on the minds of many is where to establish campgrounds immediately or how to support those who camp where they must.
Conscience in Action and HUFF meet tomorrow at the Sub Rosa Café at 11 AM. Come to a Food Not Bombs meal Saturday or Sunday at 4 PM outside the Post Office—if there’s any sidewalk left that’s not fenced off. Support the Day/Night Shelter program of Brent Adams. Keep your ears open for the call to support the next steps towards a meaningful immediate emergency shelter alternative.
This may mean a coalition with Renters, Students, the Disabled, the Elderly, and other marginalized groups. One thing is sure. It’s not coming from the City Council.