Newswire
Calendar
Features
Home
Donate
From the Open-Publishing Calendar
From the Open-Publishing Newswire
Indybay Feature
Publish to Newswire
Add an Event
Related Categories: Santa Cruz Indymedia | Police State & Prisons
Mother Calls Out Santa Cruz Police for Publicly Humiliating People with 'Serious Life Problems'
by Santa Cruz Police News
Saturday Oct 20th, 2018 2:35 PM
Community members continue to complain about the Santa Cruz Police Department policy of allowing violent and vigilante types of comments from the public to remain visible on their social media accounts, however few avenues are available for them to pursue their complaints. Recently the mother of an individual targeted by SCPD spoke out on social media, accusing the department of bias for selectively posting mugshots and other photos of individuals they have arrested, which she says results in violent comments made towards those individuals by the public. 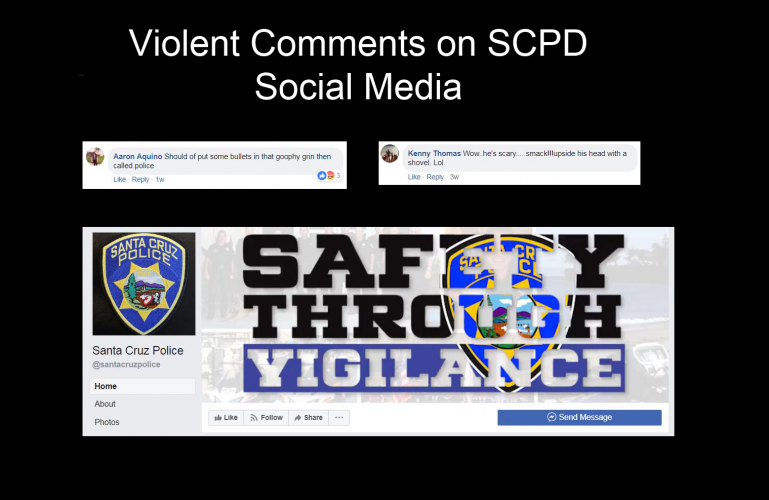 original image (1519x987)
On October 12, the mother of a person whose mugshot was posted on the SCPD Facebook page spoke directly to police in the comments section of another arrestee's photo who was unrelated to her son's case:


"You are inciting violence. People on your websites SCPD are saying violent things. About wanting to hurt these people you post. Who are not actually charged or sentenced at all. You are creating more crime with this site."

"Not cool shaming people and making it impossible to get fair treatment in court. You are biasing the narrative before someone is even charged. This is likely illegal."


She also wrote the following statement on her Facebook page on October 16:

"Make state wide news out of ...Not much. Not sure how they pick and choose who to feature on their social media pages and leak news out through the state?

"I see a trend. They are targeting the mentally ill, the homeless and non-white people

"It is really sick. Am not even sure they realize they are this f'ed. This biased.

"Homeless are being targeted in town by people seeking vigilante "justice." being violent.

"The SCPD leave up comments on their social media pages advocating harming people!

"I called a sergeant and asked that they start moderating their boards! Have an admin that actually deletes comments and people who suggest violence against people.

"I had to report multiple people and comments."
§A recent violent comment made on SCPD social media
by Santa Cruz Police News Saturday Oct 20th, 2018 2:35 PM 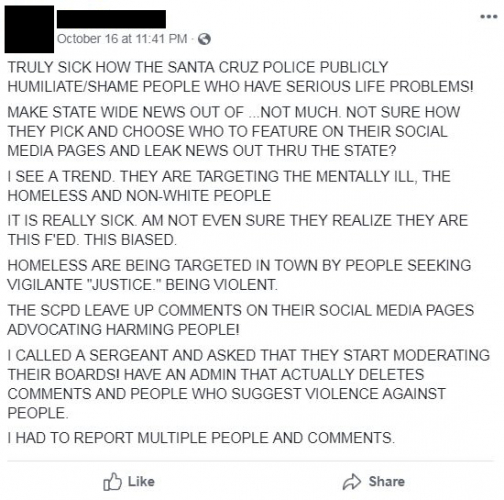 original image (550x545)
Add Your Comments
LATEST COMMENTS ABOUT THIS ARTICLE
Listed below are the latest comments about this post.
These comments are submitted anonymously by website visitors.