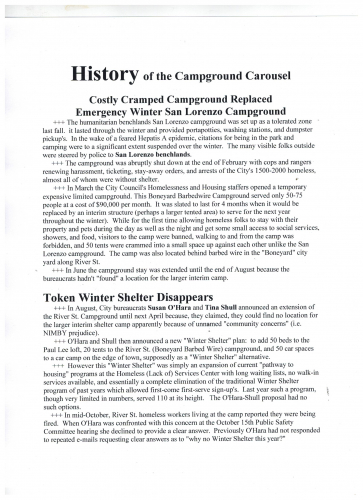 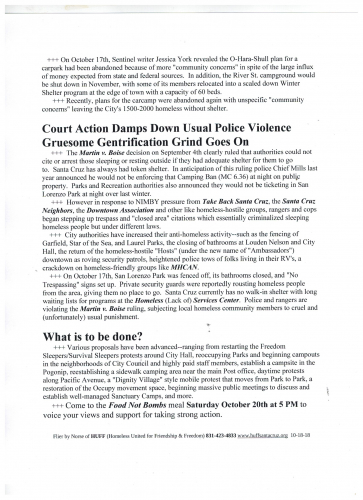 Costly Cramped Campground Replaced Emergency Winter San Lorenzo Campground
+++ The humanitarian benchlands San Lorenzo campground was set up as a tolerated zone last fall. it lasted through the winter and provided portapotties, washing stations, and dumpster pickup's. In the wake of a feared Hepatis A epidemic, citations for being in the park and camping were to a significant extent suspended over the winter. The many visible folks outside were steered by police to San Lorenzo benchlands.
+++ The campground was abruptly shut down at the end of February with cops and rangers renewing harassment, ticketing, stay-away orders, and arrests of the City's 1500-2000 homeless, almost all of whom were without shelter.
+++ In March the City Council's Homelessness and Housing staffers opened a temporary expensive limited campground. This Boneyard Barbedwire Campground served only 50-75 people at a cost of $90,000 per month. It was slated to last for 4 months when it would be replaced by an interim structure (perhaps a larger tented area) to serve for the next year throughout the winter). While for the first time allowing homeless folks to stay with their property and pets during the day as well as the night and get some small access to social services, showers, and food, visitors to the camp were banned, walking to and from the camp was forbidden, and 50 tents were crammed into a small space up against each other unlike the San Lorenzo campground. The camp was also located behind barbed wire in the "Boneyard" city yard along River St.
+++ In June the campground stay was extended until the end of August because the bureaucrats hadn't "found" a location for the larger interim camp.

Token Winter Shelter Disappears
+++ In August, City bureaucrats Susan O'Hara and Tina Shull announced an extension of the River St. Campground until next April because, they claimed, they could find no location for the larger interim shelter camp apparently because of unnamed "community concerns" (i.e. NIMBY prejudice).
+++ O'Hara and Shull then announced a new "Winter Shelter" plan: to add 50 beds to the Paul Lee loft, 20 tents to the River St. (Boneyard Barbed Wire) campground, and 50 car spaces to a car camp on the edge of town, supposedly as a "Winter Shelter" alternative.
+++ However this "Winter Shelter" was simply an expansion of current "pathway to housing" programs at the Homeless (Lack of) Services Center with long waiting lists, no walk-in services available, and essentially a complete elimination of the traditional Winter Shelter program of past years which allowed first-come first-serve sign-up's. Last year such a program, though very limited in numbers, served 110 at its height. The O'Hara-Shull proposal had no such options.
+++ In mid-October, River St. homeless workers living at the camp reported they were being fired. When O'Hara was confronted with this concern at the October 15th Public Safety Committee hearing she declined to provide a clear answer. Previously O'Hara had not responded to repeated e-mails requesting clear answers as to "why no Winter Shelter this year?"
+++ On October 17th, Sentinel writer Jessica York revealed the O-Hara-Shull plan for a carpark had been abandoned because of more "community concerns" in spite of the large influx of money expected from state and federal sources. In addition, the River St. campground would be shut down in November, with some of its members relocated into a scaled down Winter Shelter program at the edge of town with a capacity of 60 beds.
+++ Recently, plans for the carcamp were abandoned again with unspecific "community concerns" leaving the City's 1500-2000 homeless without shelter.

Court Action Damps Down Usual Police Violence Gruesome Gentrification Grind Goes On
+++ The Martin v. Boise decision on September 4th clearly ruled that authorities could not cite or arrest those sleeping or resting outside if they had adequate shelter for them to go to. Santa Cruz has always had token shelter. In anticipation of this ruling police Chief Mills last year announced he would not be enforcing that Camping Ban (MC 6.36) at night on public property. Parks and Recreation authorities also announced they would not be ticketing in San Lorenzo Park at night over last winter.
+++ However in response to NIMBY pressure from Take Back Santa Cruz, the Santa Cruz Neighbors, the Downtown Association and other like homeless-hostile groups, rangers and cops began stepping up trespass and "closed area" citations which essentially criminalized sleeping homeless people but under different laws.
+++ City authorities have increased their anti-homeless activity--such as the fencing of Garfield, Star of the Sea, and Laurel Parks, the closing of bathrooms at Louden Nelson and City Hall, the return of the homeless-hostile "Hosts" (under the new name of "Ambassadors") downtown as roving security patrols, heightened police tows of folks living in their RV's, a crackdown on homeless-friendly groups like MHCAN.
+++ On October 17th, San Lorenzo Park was fenced off, its bathrooms closed, and "No Trespassing" signs set up. Private security guards were reportedly rousting homeless people from the area, giving them no place to go. Santa Cruz currently has no walk-in shelter with long waiting lists for programs at the Homeless (Lack of) Services Center. Police and rangers are violating the Martin v. Boise ruling, subjecting local homeless community members to cruel and (unfortunately) usual punishment.

What is to be done?
+++ Various proposals have been advanced--ranging from restarting the Freedom Sleepers/Survival Sleepers protests around City Hall, reoccupying Parks and beginning campouts in the neighborhoods of City Council and highly paid staff members, establish a campsite in the Pogonip, reestablishing a sidewalk camping area near the main Post office, daytime protests along Pacific Avenue, a "Dignity Village" style mobile protest that moves from Park to Park, a restoration of the Occupy movement space, beginning massive public meetings to discuss and establish well-managed Sanctuary Camps, and more.
+++ Come to the Food Not Bombs meal Saturday October 20th at 5 PM to voice your views and support for taking strong action.

§History of the Campground was written by me
by Robert Norse Friday Oct 19th, 2018 1:32 PM
All opinions and errors are mine. Plus I take credit for anything useful or positive there.
§Correction
by Robert Norse Saturday Oct 20th, 2018 10:38 PM
The number of beds allegedly being added to the Paul Lee loft program is 20 beds, not 50 as written in the flyer. Apologies for the typo.
Add Your Comments
Support Independent Media
We are 100% volunteer and depend on your participation to sustain our efforts!