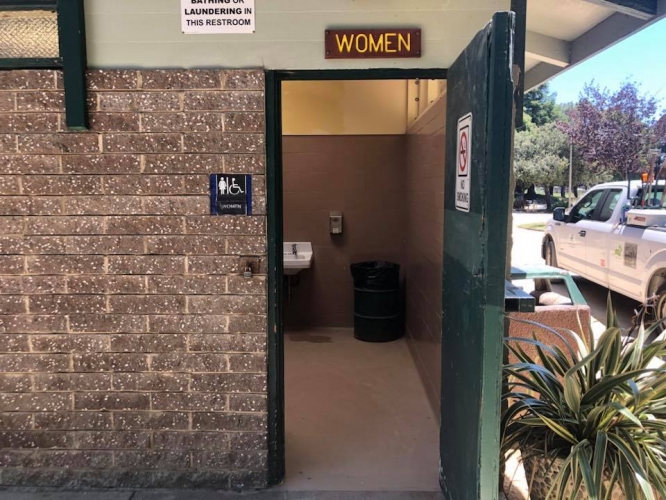 original image (960x720)
A meeting on Friday, June 29 at City Hall between members of Conscience and Action and the City Manager has resulted in the bathrooms at San Lorenzo Park being once again being opened to the public. During the meeting, which addressed the need for basic dignity for every resident of our community, a wide range of issues were discussed. In particular, the issue of the continuing lack of public bathrooms and hand washing stations available for use by houseless residents as well as the new restrictions on use of the public restrooms at Louden Nelson Community Center.

The City Manager, Martin Bernal, was specifically requested to revisit the closure of the public facilities in San Lorenzo Park and seem a little surprised that no recent review of the closure had been undertaken. He responded in no uncertain terms that he would personally look into the matter. Longtime houseless activists have historically been disappointed in the city's reaction to the bathroom issue. But to the surprise of many, and as a response to the Conscience and Action request, the San Lorenzo bathrooms are now once again open to the public. Pictures of the publicly accessible facilities were posted by on Facebook by Brent Adams on July 9 and two of those appear with this report.

For those who have labored long in support of the houseless and poor people generally in our community, this is a small but welcome victory. Progress in our community too often comes slowly, but for those who now have at least one more opportunity to enjoy the basic dignity we all deserve, it is a good moment in time and one that we should all pause to appreciate.
§Photo courtesy of Brent Adams
by Conscience and Action Wednesday Jul 11th, 2018 5:28 PM 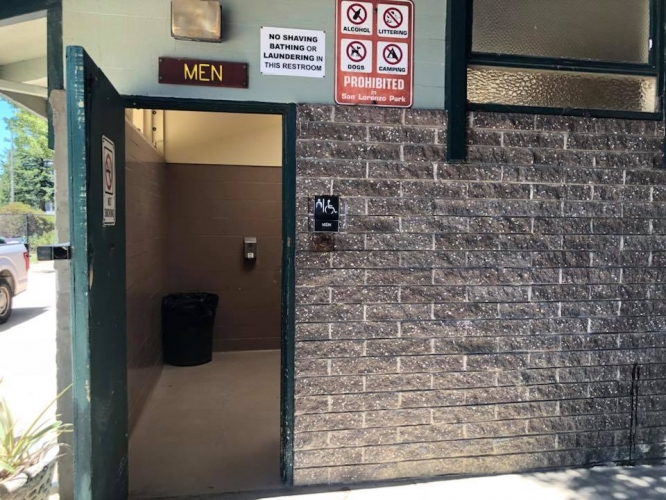 §Documents and Documentation
by Robert Norse (rnorse3 [at] hotmail.com)
Saturday Jul 14th, 2018 10:58 AM
Whoever wrote this analysis has a sunnier view of City Manager Bernal than I experienced. My impression was that he made no strong commitments and did not advise us he was going on vacation the next day. Still whoever made the decision to finally reopen the San Lorenzo bathrooms after a year of closure made the right choice.

Those who want to hear some of the meeting can find its last half at http://radiolibre.org/brb/brb180705.mp3 [12 minutes into the audiofile]. The first half should be available soon.

However, the Louden Nelson bathrooms remain closed to the poor unless they can prove to the satisfaction of the staff there that they are "part of a program" there--something that has never been required in the decades long history of the Center.

The closure prompted the local ACLU (never the most forthcoming in opposing anti-homeless measures) to publicly denounce the bathroom and other recently-instituted abusive policies there (like the iron fence, new "unattended property" rules, and roaming "security" guards). And to move its meetings to the Resource Center for Nonviolence.

See "ACLU Statement of Opposition to Anti-Homeless Measures at Louden Nelson Center and Park" at https://www.indybay.org/newsitems/2018/06/09/18815564.php

HUFF (Homeless United for Friendship and Freedom) voted to begin tabling at Louden Nelson to maintain the focus on the original focus of Conscience and Action's first series of protests.

Our goal: to sample public opinion, determine Louden Nelson exclusionary policy in action, gather signatures opposing the closing of the Louden Nelson bathrooms, and alert the community to the situation and possible alternative solutions...

We'll be tabling at 1:30 PM Tuesday July 17th in back of the Louden Nelson Center (and registering voters as well). Anyone interested can join us.

Recently, after four delays, Parks and Recreation finally forwarded a mass of e-mails, which I'm beginning to go through to determine what the justification (other than prejudice and gentrification) is for closing the bathrooms.

Folks who want to check through these documents on their own can go to https://cityofsantacruz.sharefile.com/share/view/1751d6623671456d
http://huffsantacruz.org
Add a Comment
Support Independent Media
We are 100% volunteer and depend on your participation to sustain our efforts!