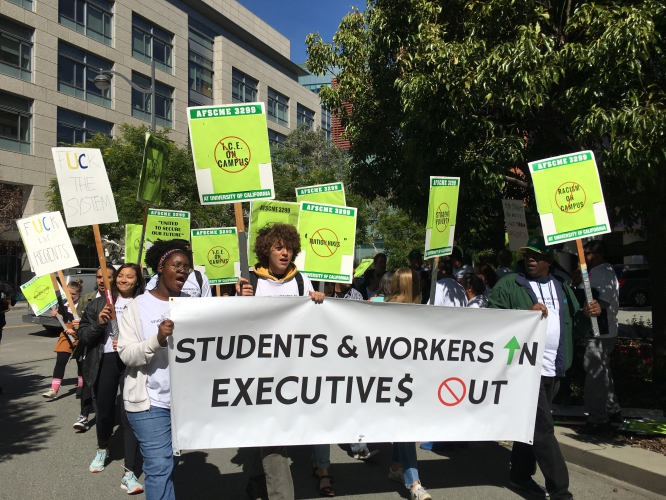 original image (4032x3024)
Dozens of UC workers and students protested at the UC Regents meeting on May 17, 2017 at the UC Mission Bay campus about the growing corruption scandal of UC President Janet Napolitano who engaged in an attempted manipulation of a CA state audit and cover-up of $175 million in public funds that were kept secret.

While conspiring to cover-up this money from the CA State Auditors, she and the UC Regents were increasing the registration fees of students, contracting out and privatizing tech and other services as well as attacking the defined pension plans of UC workers. Some like the clericals represented by IBT 2010 have accepted a two tier pension system forcing newly hired employees into 401K pension plans.

The students and workers talked about their dire economic conditions including some students going hungry in one of the richest places in the world.
Lt. Governor Gavin Newsom who is a UC Regent said the audit was too strict and that UC president Janet Napolitano was doing a good job.

UAW 2865 which represents graduate students has called for the resignation of Janet Napolitano for the manipulation and cover-up that was exposed in the state audit. 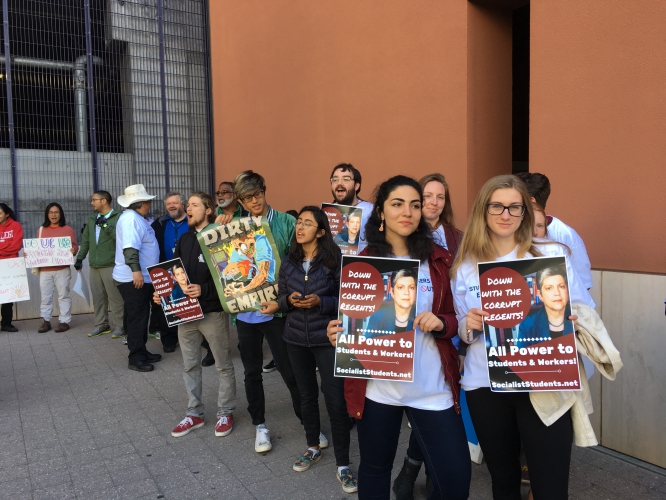 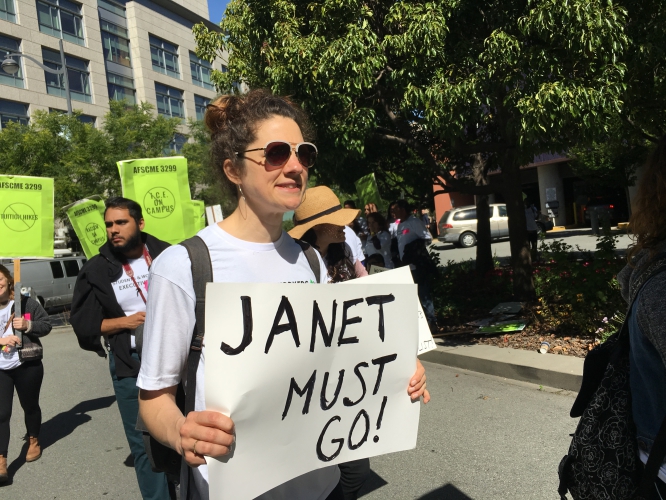 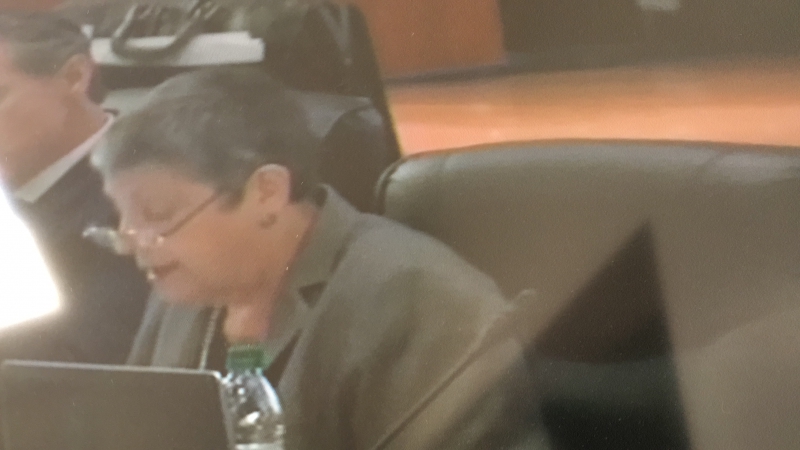 original image (3412x1920)
Janet Napolitano is still defending the corrupt manipulation of the California State Audit and no public officials are calling for her prosecution and imprisonment for falsifying public information and ordering public officials to lie about the real financial facts.
https://www.youtube.com/watch?v=RgQfe1HMWVM
§Poverty Jobs and Student Poverty Protested
by Labor Video Project Wednesday May 17th, 2017 6:46 PM 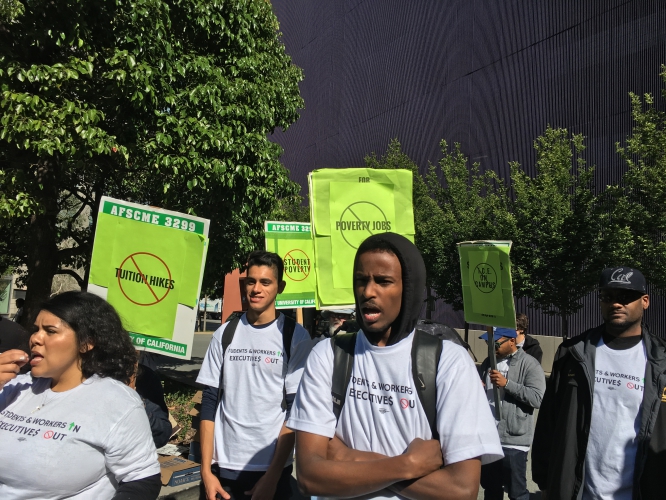 original image (4032x3024)
While the UC Regents and executives spend millions on parties and bonuses for executives poverty grows among students and workers.
https://www.youtube.com/watch?v=RgQfe1HMWVM
§How Much Is My Life Worth
by Labor Video Project Wednesday May 17th, 2017 6:46 PM 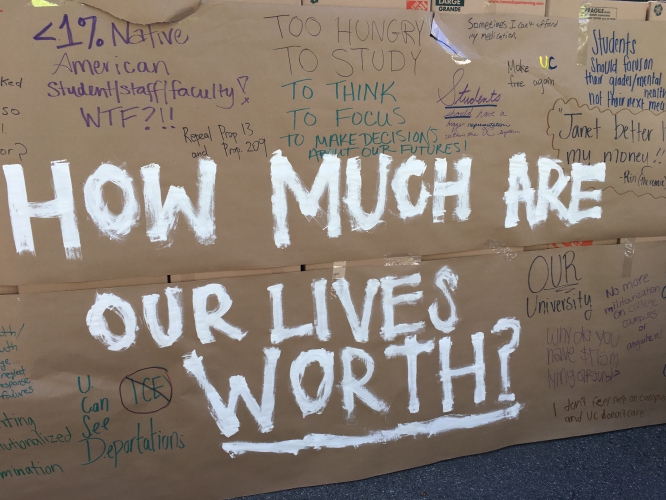 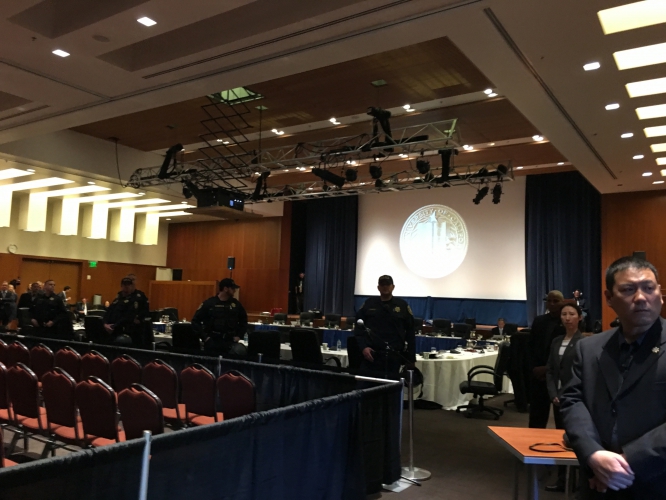 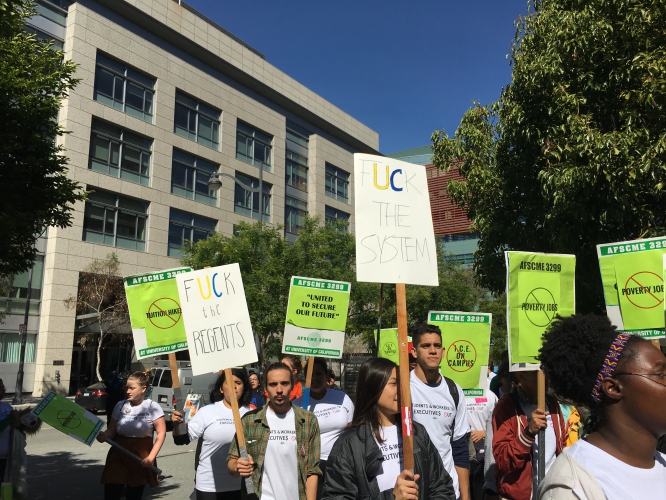 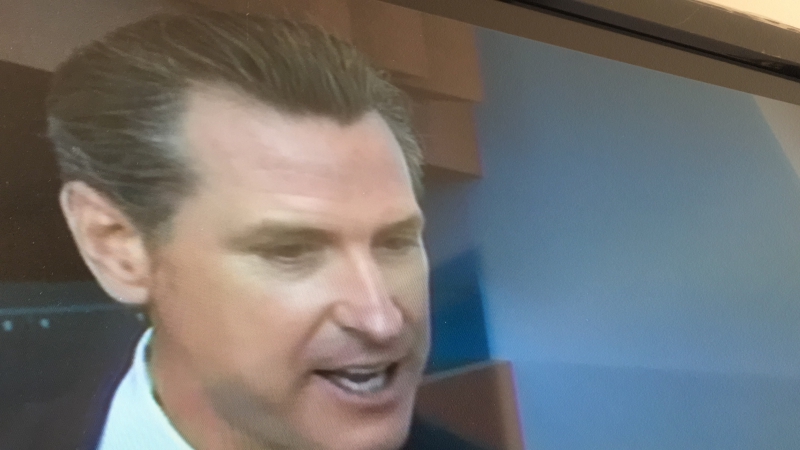 original image (3412x1920)
California Lt. Governor Gavin Newsom and candiate for governor is defending UC President Janet Napolitano saying that the audit was too strict and also she was doing a good job.
https://www.youtube.com/watch?v=RgQfe1HMWVM
Add Your Comments

§Sign the Petition to protest this grand larceny
by Petition for Redress of Grievances
Thursday May 18th, 2017 4:36 AM
Go to https://www.change.org/p/university-of-california-regents-rollback-redistribute-restructure-in-the-u-c
It is addressed to University of California Regents
Governor
Jerry Brown
State Representative
Kevin McCarty
The text is:
On April 25, 2017 the California state auditor released a “scathing” report that revealed the University of California Office of the President (UCOP) keeping $175 million in a hidden fund(1) and engaging in shady book-keeping practices. This report also highlighted that UC executive compensation is excessively high(2). This news is disturbing and betrays the public trust.


Therefore we are making 4 demands:

Given that in January the UC Regents voted to raise tuition for the first time in six years(3), because they claimed to need the $88 million this tuition hike would raise, when the whole time the UC system had more than double this sum, we call for an immediate rollback of the recent tuition hike.

In light of the UC continually not paying livable wages to its students and workers we demand that the UC pay a living wage to all of its workers - not just those working over 20 hours per week, and to not exempt contracted workers from this living wage(4). We also demand the UC build more affordable on-campus housing for both students and workers and lower class sizes. The UC can fund these demands with the remainder of the hidden $175 million, after the tuition rollback is paid for, and by cutting the excessive executive compensation.

We demand Janet Napolitano to resign for this mismanagement of funds, and for lack of transparency and loss of public trust. As Mercury News reported, “Napolitano’s office interfered in a survey of campuses. Campus statements that were initially critical of the Office of the President were revised, the auditor said, and quality ratings shifted to be more positive.”(1)

This $175 million dollar question is the last straw in a long series of UC administrative scandals. Last year UC Davis Chancellor Linda P.B. Katehi resigned under pressure(5) after a thirty-six day long student sit-in outside her office(6) after news about excessive compensation from moonlighting on outside boards and conflicts of interest because of those boards. Despite this, the new UC Davis Chancellor, Gary May, will be making more money from his outside board positions than former Chancellor Katehi(7). There has also been a string of inadequately handled sexual harassment cases that have come to light recently, including top professors from Berkeley(8,9,10)) and UCLA (11), a Dean(12), a UC Regent (13), and many more(14).


We believe that the administration is incapable of holding itself accountable. Unfortunately when students try to hold it accountable, the administration has a history of repressing student activists including but not limited to: beating them with batons(15), pepper spraying them(16), drawing loaded guns on unarmed peaceful students(17), and pressing trumped up charges on them(18).


Therefore we demand structural reform, including:

More oversight power by students and workers - expand the number of student regents (students need more representation than just two representatives for the regents who aren’t even elected by the students) and add union representatives to the board, or abolish the regent system altogether and move toward a more democratic governance by students and workers
No more outside board positions for Chancellors. Our chancellors should be dedicated and focused to their single duty to the UC community, and not allowed to hold outside jobs that would compromise their jobs as chancellor.
Better policies and procedures for preventing and handling sexual harassment.

Our school needs to be a place of higher learning rather than a place of higher profits. We must resist the growing administrative power and the incentive to run the UC like a corporation for their own profit. We call on all residents of California and students involved with the universities to sign this petition and support our efforts for a more equitable and democratic university.

https://www.change.org/p/university-of-cal...
Add a Comment
Support Independent Media
We are 100% volunteer and depend on your participation to sustain our efforts!