Add an Event
Newswire
Calendar
Features
Home
Donate
From the Open-Publishing Calendar
From the Open-Publishing Newswire
Indybay Feature
Publish to Newswire
Add an Event
Related Categories: California | East Bay | Global Justice & Anti-Capitalism | Police State & Prisons | Racial Justice | Womyn
Louise Rosealma on Berkeley and It’s Implications
by It's Going Down
Tuesday Apr 18th, 2017 5:39 PM
In an audio interview with It's Going Down, Louise discusses their anarchist and antifascist beliefs, about being attacked by Damigo, and how they were then literally almost killed by several other Alt-Right supporters, who attempted to slam their head onto rocks and pavement. 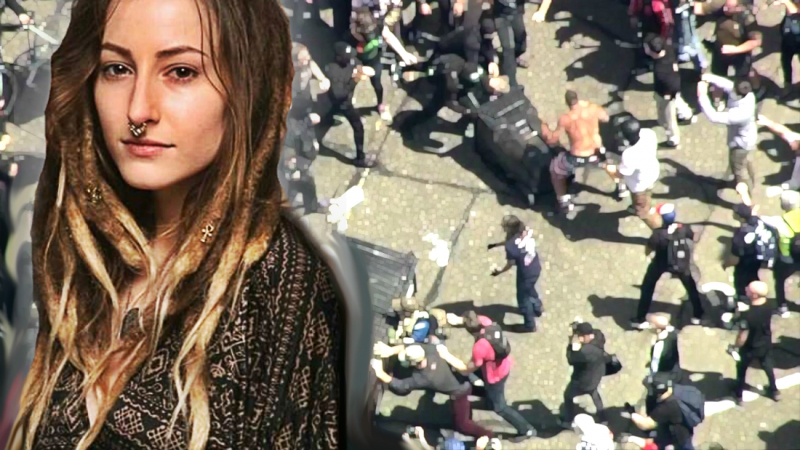 The image of Louise being punched by Nathan Damigo, the neo-Nazi leader of Identity Evropa, has now become the most iconic footage to come out of the clashes between anarchists and white supremacists in Berkeley, CA. Unsurprisingly, the Alt-Right declared victory for the day (as they would have under any context) after police openly helped take away shields and poles from antifascists and effectively enforced a permit that never existed for the fascists. But while police collusion with neo-Nazis and the Alt-Right isn’t surprising, what largely isn’t being talked about in any media is the rising amount of support that is being generated for anarchists and antifascists for having the bravery to confront those on the far-Right for hours upon hours.

In many ways, the outpouring of support for Louise and brewing hatred against Damigo (even Captain America wants a shot!), is a testimonial to this reality. Wanting to set the record straight about what all went down on the 15th, we caught up with Louise to talk about what really happened in the midst of the ongoing media storm. In this interview, Louise discusses their anarchist and antifascist beliefs, about being attacked by Damigo, (who quickly fled as seen in multiple videos), and how they were then literally almost killed by several other Alt-Right supporters, who attempted to slam their head onto rocks and pavement.

In the interview we also talk about the need for people to conceal their identity while engaging in such actions, the barrage of threats of sexual assault and murder they have received from the Alt-Right, and the need for all of us to begin to take training, fighting, and organizing of the utmost seriousness.

It’s Going Down is a network of friends and comrades across so-called North America who have come together to produce a revolutionary anarchist, anti-fascist, autonomous anti-capitalist and anti-colonial media platform. We seek to provide news and analysis of when it goes down: riots, strikes, sabotage, occupations, expropriations, rebellion, revolt, and insurrection. Whether together or alone – we support liberatory revolt.

https://itsgoingdown.org/igdcast-louise-on...
§Audio: Louise Rosealma on Berkeley and It’s Implications
by It's Going Down Tuesday Apr 18th, 2017 5:39 PM
Listen now:
Copy the code below to embed this audio into a web page:
Download Audio (23.2MB) | Embed Audio

We will unite and demolish the fascists!
Add a Comment
§Get the worst taken down.
by DMCA user
Tuesday Apr 25th, 2017 8:19 AM
Hey, Louise: The DMCA is very useful for getting copyrighted images of you taken down. Maybe using the law isn't your thing, but it's something to consider. Though the Streisand effect is a thing. You can file a DMCA yourself. I've done it for a friend, and it worked. See, e.g. here
Add a Comment
Support Independent Media
We are 100% volunteer and depend on your participation to sustain our efforts!