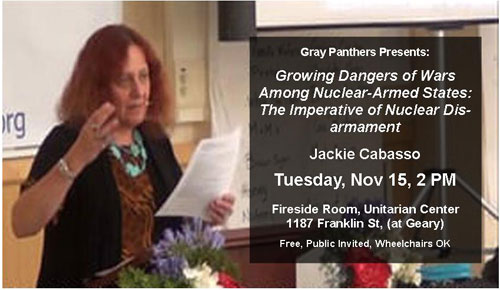 Growing Dangers of Wars
Among Nuclear-Armed States:
The Imperative of Nuclear Disarmament

Jackie Cabasso has been continuously active in nuclear disarmament, peace and environmental advocacy for decades. She has spoken at public hearings, legislative symposia and conferences around the United States, Europe, Asia, and Latin America, and has addressed rallies and gatherings at the Livermore and Los Alamos nuclear weapons laboratories, at US nuclear test sites, and in Hiroshima and Nagasaki.

Jackie is contributing author to a new collection of papers entitled, Rethinking General and Complete Disarmament in the Twenty-First Century, published by the United Nations in October 2016. She received the International Peace Bureau’s 2008 Sean MacBride Peace Award, and the Agape Foundation’s 2009 Enduring Visionary Prize.

Contact:
Denise D'Anne, ddanne1 [at] sbcglobal.net, 415-431-4172, or
Michael Lyon, mlyon01 [at] comcast.net, 415-215-7575
END_OF_DOCUMENT_TOKEN_TO_BE_REPLACED
Added to the calendar on Sun, Nov 6, 2016 12:18AM
Related Categories: San Francisco | Anti-War
Add Your Comments
Latest Comments
Listed below are the latest comments about this post.
These comments are submitted anonymously by website visitors.
TITLE
AUTHOR
DATE
also Nov 15, SF: Stand With Standing Rock
info needed
Support Independent Media
We are 100% volunteer and depend on your participation to sustain our efforts!