Add an Event
Newswire
Calendar
Features
Home
Donate
From the Open-Publishing Calendar
From the Open-Publishing Newswire
Indybay Feature
Publish to Newswire
Add an Event
Related Categories: California | East Bay | U.S. | Government & Elections
Bernie Sanders rallies in Oakland before California primary, 5/30/16
by Dave Id
Monday Jun 6th, 2016 4:39 PM
Democratic Socialist Bernie Sanders has been barnstorming across California, making dozens of campaign appearances in cities throughout the state. The Vermont Senator's heavy play for a majority of California's 475 pledged delegates has brought about a much more competitive race than usual for a state that votes at the very tail end of the presidential primary contest. Hillary Clinton was supposed to have the nomination sown up by this point, but Sanders' efforts in the most populous state in the nation have forced Hillary to campaign more aggressively here than she originally intended. The latest polling shows Sanders and Hillary in a statistical dead heat heading towards the June 7 democratic primary. 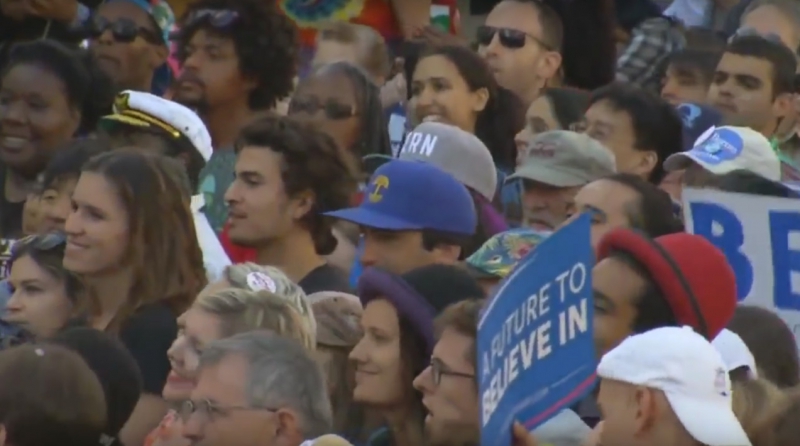 original image (1273x710)
For posterity, here's a record of Bernie Sanders' campaign appearance in front of Oakland City Hall on May 30, 2016 (full audio below), as well as commentary on the current state of the race for the Democratic nomination. All images and audio here from Sanders' campaign video of the event.

Bernie Sanders made his standard stump speech — fighting against income inequality, dialing back mass incarceration and police violence, creating a more inclusive democracy — with a rational added in for why California has an important role to play in his "political revolution." Despite the virtually insurmountable odds he faces to win the Democratic nomination, Sanders emphasized that California voters have a chance to send a huge message to the Democratic Party, and the country, that more radical changes are required than the incrementalist approach promised by Hillary Clinton.

Sanders touted the fact that he's won primaries and caucuses in twenty states, representing over nine million individual votes, but, at this late date, he still runs behind Hillary in number of states won, overall votes, and Democratic Party super delegates, hundreds of elected officials and party insiders who will determine the nominee. After New Jersey's votes are tallied on June 7, before polls even close in California, Hillary looks likely to cross the threshold of 2383 delegates required to become the presumptive Democratic nominee, adding together delegates won in New Jersey along with the 1809 pledged delegates she has already racked up via other primaries and caucuses and the 548 super delegates who long ago declared their support for her. (Sanders has just 46 superdelegates on his side.)

Nevertheless, Sanders continues to insist that he can convince superdelegates to switch allegiance, either before or during the upcoming Democratic presidential convention on July 25-28 in Philadelphia. As recently as this weekend, Sanders was promising a "contested" convention due to the fact that neither candidate will arrive in Philadelphia with enough pledge delegates to meet the 2383 threshold. At a press conference today in Emeryville, Sanders said the future of his campaign will be determined by the results of the California primary. It remains to be seen what Sanders will actually do after voting in the Democratic primary process ends.

With the race for the nomination essentially over after New Jersey, a win in California for Sanders would still stand as yet another blow to Hillary and the cakewalk to the presidency she anticipated before Sanders declared his candidacy and began to resonate with a wide swath of Democratic voters in 2015. Sanders could potentially spin a California win as another sign that he has the momentum heading toward the Democratic convention and is best suited to win over Republican nominee Donald Trump, having consistently polled stronger against Trump than Hillary.

A Sanders win in California would certainly highlight the nagging fact that Hillary has a historically high unfavorable rating for a major party presidential nominee, over 50% negative. The "experience" her campaign trumpets includes a troubling record on foreign policy (Iraq, Libya, Honduras, etc), enriching herself with paid speeches to Wall Street firms and other corporate interests, sketchy donations to the Clinton Foundation made by companies and countries with business before the State Department while Hillary was Secretary of State, advocating for mass incarceration in the 1990s by calling African American youths "super predators," and a general history of lies and avoiding accountability. It's not just Republican loathing that pumps up her unfavorable rating. Independents don't like her, and even Democrats continue to vote against her in large numbers.

Fortunately for Hillary, Trump's negatives are even higher than hers, but polls have begun to show her tied with Trump or losing to him in the general election. If those numbers hold, Democrats have real cause for concern. If Hillary should lose to Trump in November, there is little doubt that party loyalists will blame Sanders and his insurgent campaign for daring to challenge her.


[Disclosure: This reporter has been registered Green for two and a half decades and will not vote in the California Democratic primary, a modified-closed presidential primary open only to registered Democrats and No Party Preference voters.]
§Full audio of Sanders' Oakland rally
by Dave Id Monday Jun 6th, 2016 4:39 PM
Listen now:
Copy the code below to embed this audio into a web page:
Download Audio (27.3MB) | Embed Audio
Full audio 1:15:29 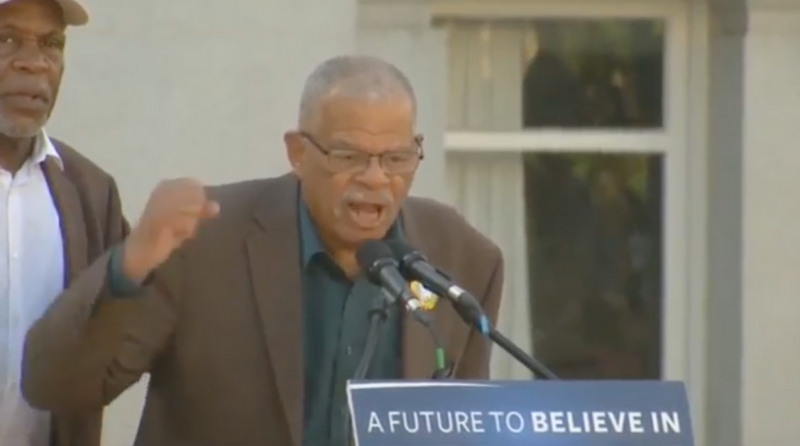 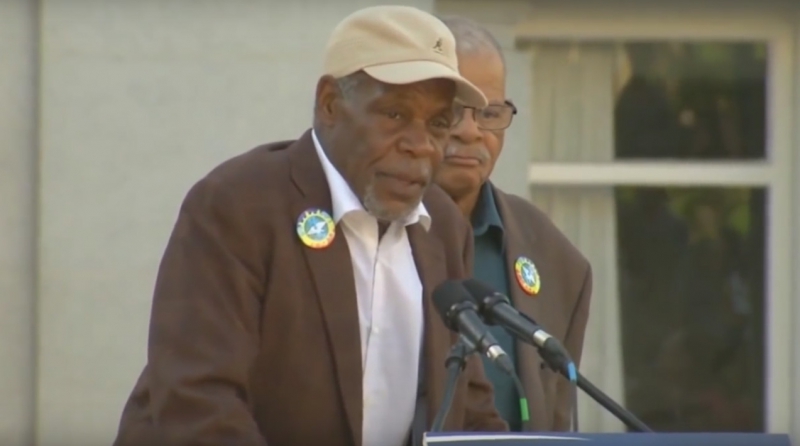 original image (1273x710)
Danny Glover is a long-time Bay Area activist. He was involved with the original 1968 struggle to establish an Ethic Studies program at San Francisco State University and recently spoke up during the SFSU hunger strike in May. https://www.indybay.org/newsitems/2016/05/10/18786256.php
§Robert Reich
by Dave Id Monday Jun 6th, 2016 4:39 PM 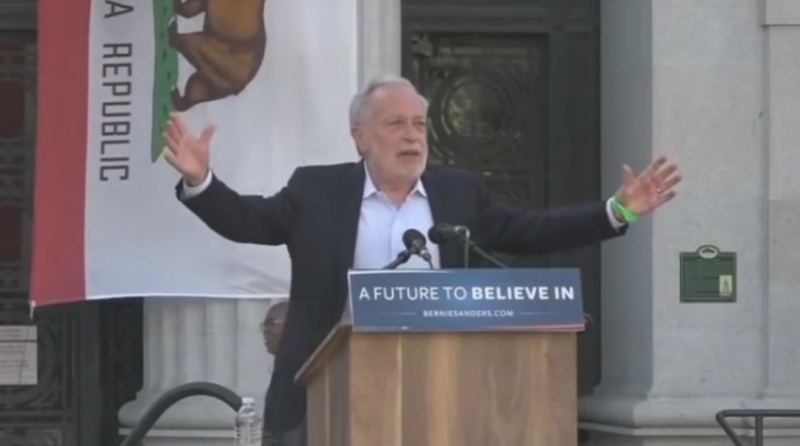 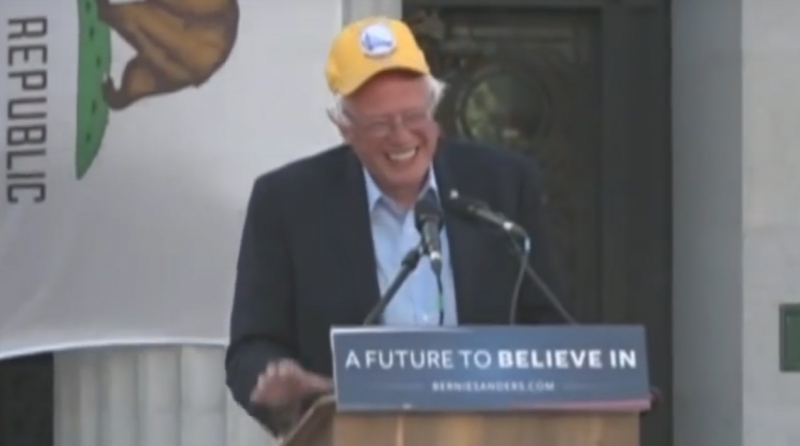 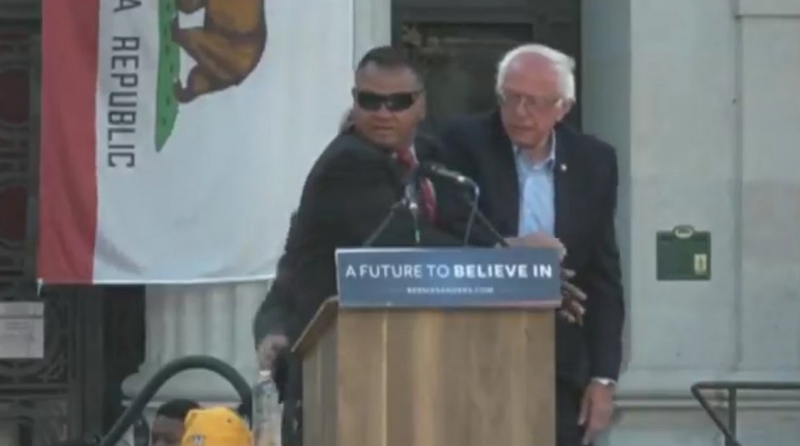 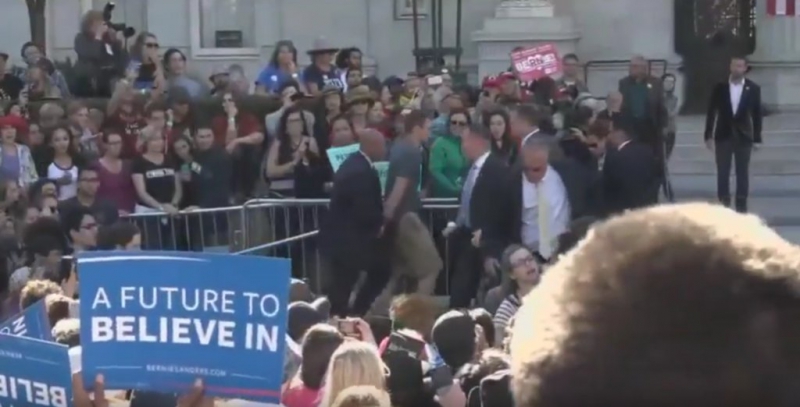 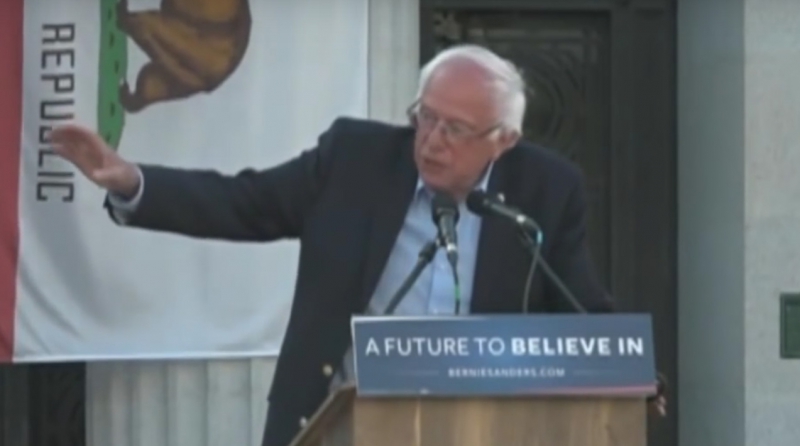 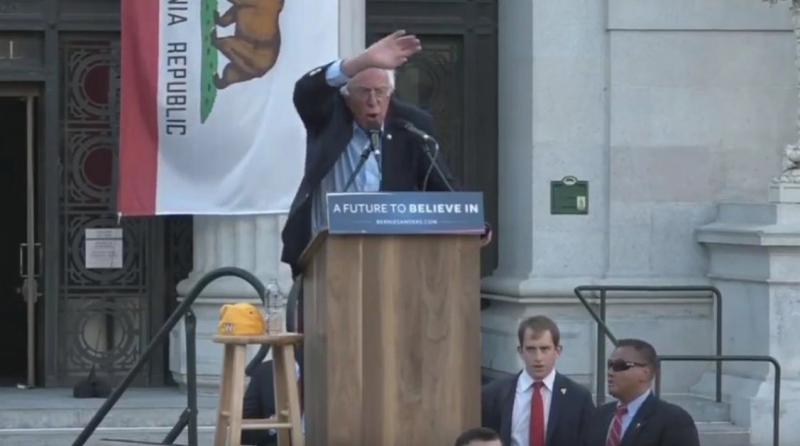 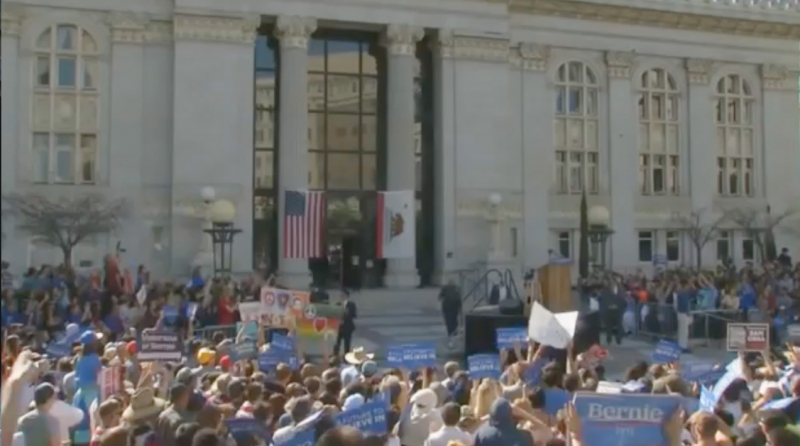 original image (1273x710)
The line to get into the secured area for the rally was about 15 blocks long. The smallest estimates for the number of attendees put the total at over 10,000.

The crowd size apparently rivaled that of the Barack Obama rally in front of Oakland City Hall in 2007. https://www.indybay.org/newsitems/2007/03/18/18378376.php
Add Your Comments
LATEST COMMENTS ABOUT THIS ARTICLE
Listed below are the latest comments about this post.
These comments are submitted anonymously by website visitors.