Add an Event
Newswire
Calendar
Features
Home
Donate
From the Open-Publishing Calendar
From the Open-Publishing Newswire
Indybay Feature
Publish to Newswire
Add an Event
Related Categories: East Bay | Government & Elections
Massive Barack Obama Campaign Appearance in Oakland, 3/17/07: photos and video
by dave id
Sunday Mar 18th, 2007 4:13 AM
A month after declaring his entry into the 2008 presidential race, Illinois Senator Barack Obama, the fast-rising phenom of the Democratic Party, appeared in Oakland for a massive campaign rally on St. Patrick's Day. Well over 10,000 people packed into Frank Ogawa Plaza to hear him make his case for why he should be elected President of the United States. While the first democratic primary isn't until January 2008 and the general election isn't until November later that year, the diverse crowd cheered Barack Obama like a rock star. He spoke for about 30 minutes. 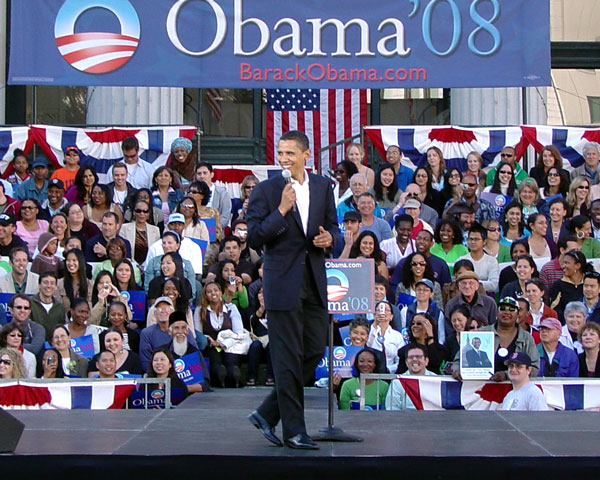 Perhaps it was the Obama campaign or the City of Oakland's organizing, perhaps it was set up for the benefit of the press over the thousands in attendance, or perhaps Frank Ogawa Plaza is simply ill-suited for a rally of this size, but 50-75% of the people there probably could not even see Obama when he spoke. The stage was set up in front of Oakland's City Hall building, which was aesthically right for the press who were conveniently located straight across from the stage, but for those not in the small ampitheater with the stage, the view was completely obstructed by the features of the park. Unfortunately the sound system was not optimized for this location and in a few places within the park the sound was unintelligible, although it was loud enough for everyone within a few blocks to hear. Another peculiar aspect of the organizing was that there were several rings of admission perimeters. Those who preregistered online, or those who received white tickets from volunteers outside of the park just before the event, were only admitted into the outer ring around the park. Another level of tickets, blue tickets, were offered to people at recent political events in the area, although an event volunteer said that a donation had not been required to receive them. Blue ticket holders could walk the entire center of the park and many found a place to view the stage in the ampitheater. A small number of gold tickets were handed out randomly in the white ticket area just before the speakers began. Gold tickets were for the very few who could sit in the bleachers behind Barack Obama.


While he was not yet a US Senator at the time, here's an interesting interview conducted with Obama from November 2002 in which he speaks about his opposition to the Iraq War resolution and its probable consequences: http://www.brightcove.com/title.jsp?title=481520374.
§Approaching Frank Ogawa Plaza from San Pablo, lines all over waiting for gates to open
by dave id Sunday Mar 18th, 2007 4:13 AM 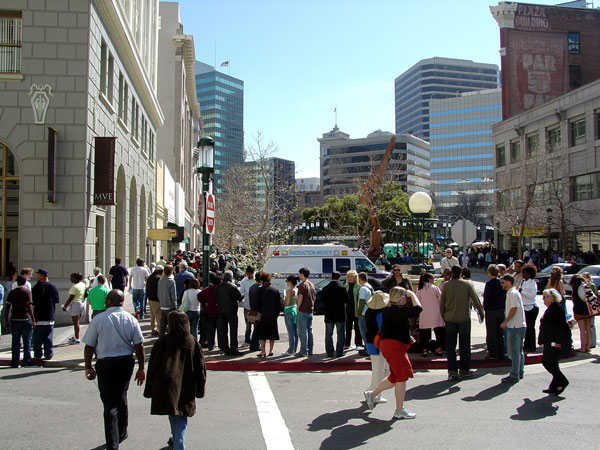 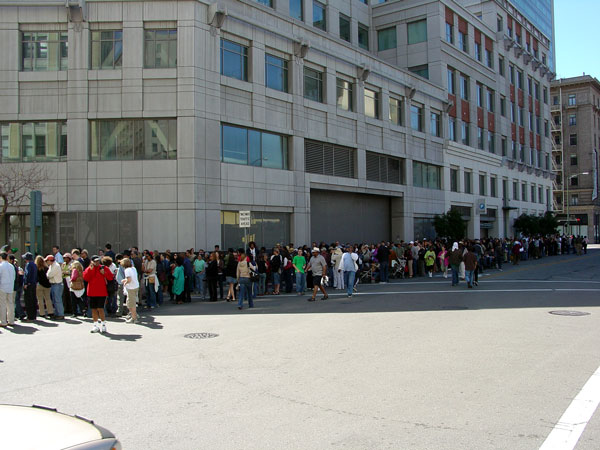 §On the left, a line two blocks long that wrapped around and entered on the south side of the park
by dave id Sunday Mar 18th, 2007 4:13 AM 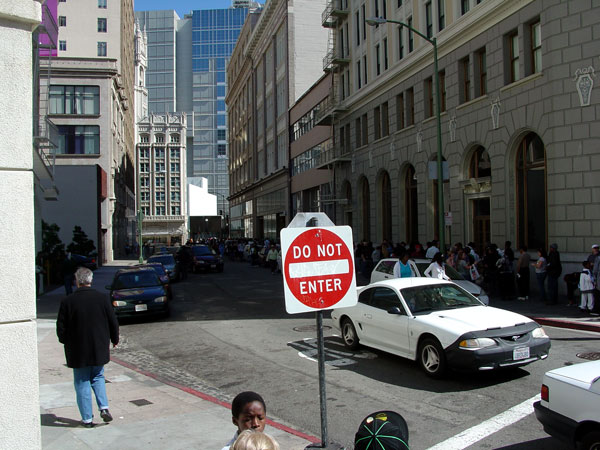 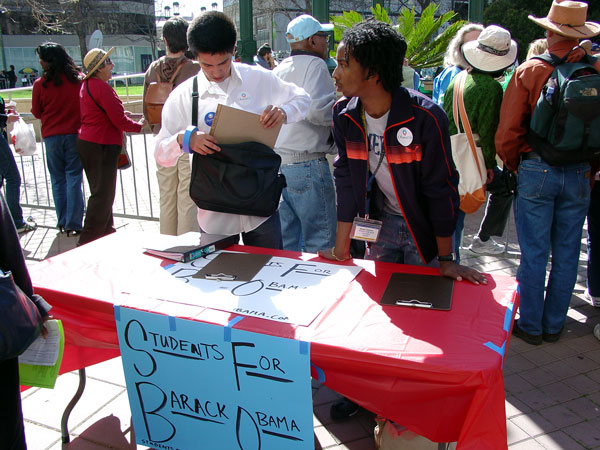 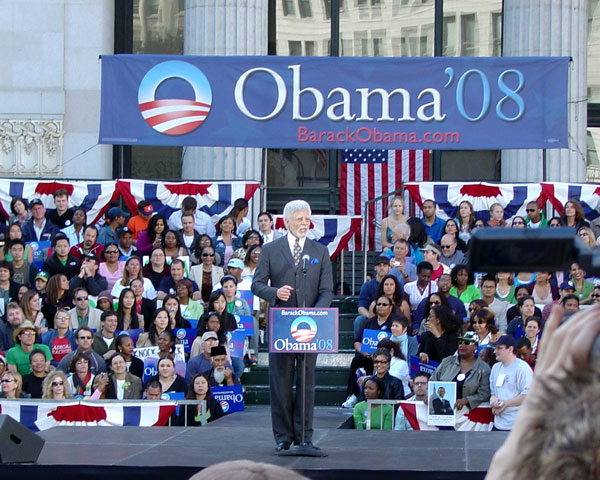 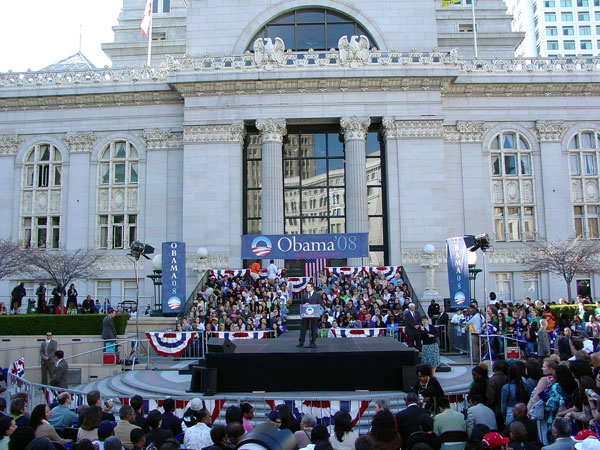 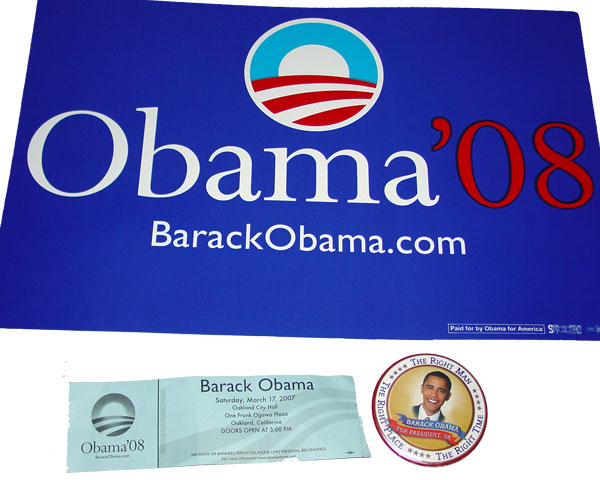 Placards were handed out in the hundreds moments before the speakers began. A discarded blue ticket. Campaign button.
§Video - 1 of 2
by dave id Sunday Mar 18th, 2007 4:13 AM
Copy the code below to embed this movie into a web page:
Download Video (58.7MB) | Embed Video
video 7:16 minutes, 61mb. (QuickTime MOV version, 20mb)


In the segue between previous video and this one, Obama explained why he is motivated to run for President. He said our country is in growing trouble, both domestically and internationally. He said we shouldn't have gone to Iraq and we need to bring the troops back as soon as possible.

Obama's conclusion to his 30 minute speech, after this video leaves off, went from some of the troubles he has seen first-hand related to the war in Iraq and our neglect of returning veterans to the massive cynicism he says has overtaken our country. This divides the country, he went on, in that the country as a whole stops trying to better itself which increases the likelihood that the well-off will ignore the needs of many. He offered hope to combat that cynicism and he called for a new audacity that would dare to believe in and work for a better future for the entire country. (One of his two books is called "The Audacity of Hope".)

He said we needed to end the war in Iraq -- that in wishing the best for the Iraqi people we have helped the them as much as possible and it was time for the Iraqis themselves to assume responsibility. He called for universal health care in his first term as President. (This was one of at least two digs at Hillary Clinton as she strangely claimed recently to want the same but before the end of her second term. Another veiled dig was in his claim that had he been in the US Senate in 2002, he would have voted against the Iraq War Resolution, yet she obviously voted for it.) He said that this country needed to get serious about alternative energy sources such as wind and solar for a variety of reasons.

While Democratic primaries and the actual election are far off, Barack Obama has captured the attention of a large number of people across the country and his message seemed to play very well with the thousands who came to hear him speak in Oakland in this early campaign appearance.
Add Your Comments
LATEST COMMENTS ABOUT THIS ARTICLE
Listed below are the latest comments about this post.
These comments are submitted anonymously by website visitors.