George Jackson in the Sun of Palestine: Colonialist Captivity and Revolutionary Struggles 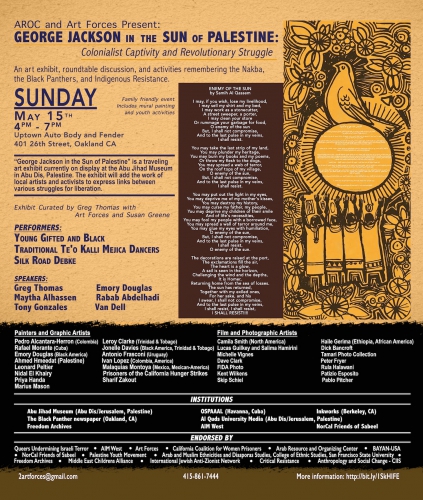 George Jackson in the Sun of Palestine:
Colonialist Captivity and Revolutionary Struggles


The Arab Resource and Organizing Center (AROC) and Art Forces invite you to join us on May 15th to remember Al Nabka, the Black Panthers, and Indigenous Resistance. This will be a family friendly event with a community mural painting, cultural performances, roundtable discussion and exhibit.

"George Jackson in the Sun of Palestine” is a traveling multimedia exhibition that expresses the depth of solidarity and closeness between the struggles against colonization in Palestine and around the world. The impetus and title for the exhibit stem from the inspiration Black Panther George Jackson received from Palestinian poet Samih al-Qasim’s poem “Enemy of the Sun.” After Jackson was assassinated in 1971 a handwritten copy of this poem was found in his prison cell. The Black Panther Party shared the classical Palestinian poem in the party’s newspaper, under the assumption it was written by Jackson himself.

Doors open at 4:00pm for the art exhibition and blessing at the Oakland Palestine Solidarity Mural with traditional Te'o Kalli Mejica Dancers (mural is located directly across the street from Uptown Body & Fender)

Added to the calendar on Thu, May 12, 2016 9:22PM
Add Your Comments
Support Independent Media
We are 100% volunteer and depend on your participation to sustain our efforts!