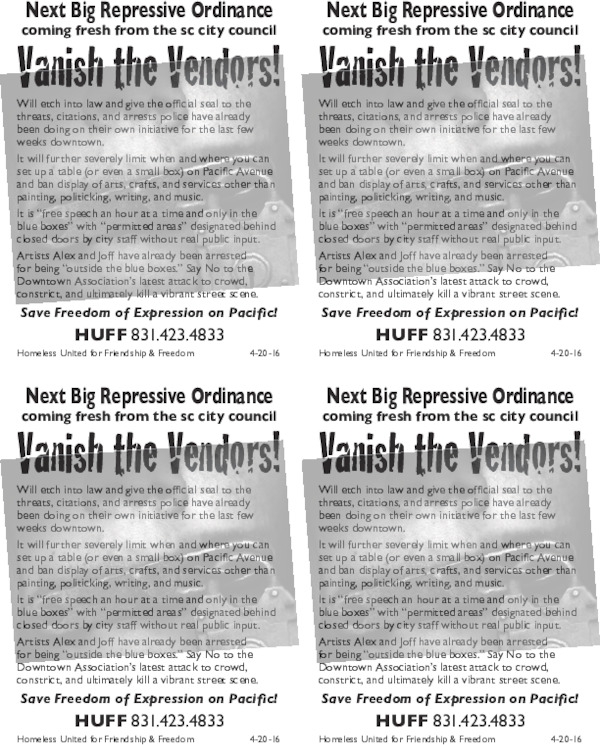 Import event into your personal calendar
Date:
Tuesday, May 10, 2016
Time:
3:00 PM - 3:00 PM
Event Type:
Protest
Organizer/Author:
Toby Nixon (post by Norse)
Email:
tobynixon [at] gms.com
Phone:
408-582-4152
Location Details:
The afternoon City Council meeting begins at 2:15 PM with the "Vanish the Vendors" law Item #14 on the Council Agenda. Food Not Bombs activists will be serving food in the late afternoon. Freedom Sleepers will hit the sidewalk and bricks across from the main library in front of the City Hall in the evening and night.
ANOTHER ROUND OF "LAW-BREAKING" FOR JUSTICE
Freedom Sleepers will continue to defy the City's 11 PM to 8:30 AM ban on the act of sleeping on all public and most private property in Santa Cruz by lining the sidewalk and City Hall grounds with sleepers on Tuesday night (5-10). Coffee and the occasional morsel to munch will likely be on hand.

Food Not Bombs is slated to be feeding and organizing during the afternoon and early evening.

THE DISMAL BACKGROUND
Santa Cruz's 1000-2000 unhoused residents continues ot face the threat and reality of harassment and citation for simply falling asleep after 11 PM. Survival "camping" is a $159 crime 24 hours a day (do it twice in 24 hours and face a year in jail and $1000 fine). Santa Cruz has zero walk-in shelter and full waiting lists for the token shelters that exist (for less than 5% of the homeless).

In March, Council crushed a minimum proposal to strike "sleeping" and "covering up with blankets" from the law, while maintaiining a "no trespassing" ban on most public property around the City. No City Council member has followed up on proposals to establish Safe Sleeping Areas for the vulnerable homeless nor on Safe Parking Areas for those whose "affordable housing" is a vehicle.

CITY COUNCIL'S NEW LAW AGAINST VENDORS, TABLERS, AND PERFORMERS
The proposed law, created behind closed doors by city staffers Julie Hende and Scott Collins and City Attorney Tony Condotti, includes a radical restriction on display for sale or donation, and sale of all kinds of items.

“Commercial Vending” is "to sell, offer for sale, expose or display for sale, solicit offers to purchase, or to barter food, goods, merchandise, or services in any area from a stand, table, pushcart, motor vehicle, bicycle, or by a person with or without the use of any other device, or to require someone to pay a fee or to set, negotiate, or establish a fee before providing food, goods, merchandise, or services, even if characterized by the vendor as a donation. [This]...includes the practice of providing, free of charge, an item which may not be vended, in exchange for the purchaser purchasing an item which may be vended as a condition for receiving the free item.

Exempted from the law are "Traditional expressive speech and petitioning activities, and the distribution of the following expressive items: newspapers, leaflets, pamphlets, bumper stickers, patches, and/or buttons." Also "items, which have been created, written or composed by the vendor or performer: books, audio, video, or other recordings of their performances, paintings, photographs, & prints." Additionally "any other item that is inherently communicative and is of nominal value or utility apart from its communication. Although an item may have some expressive purpose, it will be deemed to have more than nominal utility apart from its communication if it has a common and dominant non-expressive purpose."

The City Attorney insisted that the law did not distinguish between what is art and what is not. Instead the hall monitors of Pacific Avenue will use the above definition to determine if an item is First Amendment protected or not.

BANNED FROM THE BLACKTOP
Banned as "items that have more than nominal utility apart from their communication" "include but are not limited to... food, housewares, appliances, articles of clothing, hats, scarves, sunglasses, auto parts, oils, incense, perfume, crystals, rocks, geodes, lotions, candles, jewelry, jewelry holders, toys, stuffed animals, glass and metal pipes, and any vaping device."

Banned Performances include "(a) The application of substances to others’ bodies, including but not limited to, paints, dyes, and inks; (b) The provision of personal services such as massage or hair weaving, cutting, or styling; (c) the completion or other partial creation of visual art; (d) the creation of visual art which is mass produced or produced with limited variation; or (e) the creation of handcrafts, such as weaving, carving, stitching, sewing, lacing, and beading objects such as jewelry, pottery, silver work, leather goods, and trinkets."

The area in which no tabling is allowed except in select "exempt" zones will be chosen behind closed doors, largely by merchant pressure by Hende and Collins. That forbidden area extends from Laurel to Mission along Pacific Avenue and one block in either direction along the side streets. The forbidden zone apparently includes the twice-weekly Food Not Bombs set-up near the main Post Office. Although the new "Vanish the Vendors" law does not explicitly ban simply giving away free items such as food, another section of the ordinance prohibits the use of "display devices" (i.e. tables) except in the limited (less than 30) "exempt" zones which Hende and Collins choose to designate.

In addition the "Move Along Every Hour" law now requires what the current law does not--that folks time themselves. Anyone using a table, open guitar case, or any thing "capable of holding tangible things" placed on the sidewalk must move every hour without being asked to do so by a cop, security thug, or "host". The current law requires a warning that one's hour is up and then a "refusal" to move for the $200-300 ticket to be given. The new law just requires that you be there for 61 minutes.

Two artists--Joff Jones and Alex Skelton--were taken away in handcuffs twice within two weeks for setting up their art displays outside the sacred "blue boxes". They had also declined to move every hour. Defying the massive police presence in their second arrest, the two have returned to Pacific Avenue to continue to assert their rights. See "Santa Cruz Artists Dare to Display Art "Outside of a Blue Box"" at https://www.indybay.org/newsitems/2016/05/06/18786130.php.

OTHER SCENES OF PROTEST
Meanwhile in Sacramento, activists who staged a 3-month round-the-clock protest had all charges dropped against them. See "City of Sacramento Won't Put Unlawful Camping Ordinance on Trial, Dismisses Criminal Charges Against City Hall Protest Organizers on Eve of Trials" at http://www.nlgsf.org/news/city-sacramento-wont-put-unlawful-camping-ordinance-trial-dismisses-criminal-charges-against .

And a delayed Freedom Sleepers case will be returning to Court 8:30 AM on May 20th as Robert Norse demurs to two "trespass at the City Hall courtyard" arrests, claiming they were unconstitutional.

For more info on the Freedom Sleepers and the "Vanish the Vendors" law, check out https://www.indybay.org/calendar/?page_id=60 for the last 43 Tuesday events.
Added to the calendar on Tue, May 10, 2016 10:17AM
Add Your Comments
Support Independent Media
We are 100% volunteer and depend on your participation to sustain our efforts!